The three-term Democratic former Congressman from Central Florida has been exploring the possibility of a U.S. Senate run since March. On Friday, he began running social media ads attacking Republican Sen. Marco Rubio and touting his own commitment to universal health care.

“I think we were pretty much there,” Grayson told Florida Politics Friday. “Now we’re going to try to take it up a notch.”

Grayson is known for taking it up a notch. Or two.

In his three terms between 2009 and 2017, he earned national attention as a symbol of loud, unapologetic, liberal Democrats — often combative, sometimes controversial, revered by progressives, and reviled by Republicans across the country. On the House floor, he most famously declared that Republicans’ health care plan amounted to “Republicans want you to die quickly.“

At one point, Grayson was nearly omnipresent on liberal late-night talk shows and capable of raising huge sums of campaign money in short order from small donors all across the country. He boasts that he created the template for small-donor campaign fundraising that eventually fueled Democratic Sen. Bernie Sanders’ national campaigns.

But Grayson gave up his seat in 2016 for a chance to run against Rubio and lost in the Democratic primary. Then he lost in another primary in a 2018 attempt to win back Florida’s 9th Congressional District from his successor, Democratic U.S. Rep. Darren Soto.

Grayson said he’s running to give people “a genuine choice” based on issues.

“I think the campaign against Rubio badly needs someone who is going to explain what he is going to do to improve the lives of people in Florida,” Grayson said. “We’ve had too many campaigns over the last quarter-century in Florida where Democrats don’t promise to do anything and run what amounts to vanity campaigns. I think people deserve more than that. They deserve a choice.”

“So someone needs to run a campaign that pledges to increase social security benefits, increase Medicare benefits, ground on solid foundation the $300 a month child tax credit that’s been proposed, raise wages, and provide universal health care, as well as cleaning up pollution and assuring equal rights,” Grayson said.

Can Grayson, out of the limelight for years, regain any of his old support? In the 2018 CD 9 Primary, Grayson drew support from the usual progressive groups but found much of his party turning on him to support Soto’s reelection. 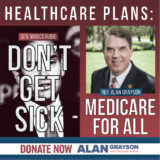 His Senate campaign ad is a variation of his “die quickly” line. Over a black-and-white picture of Rubio, the ad reads, “Don’t get sick.” Under Grayson’s picture, the ad reads, “Medicare for All.”

In another ad, Grayson brings back old allegations of corruption against Rubio, dating from Rubio’s time in the Florida House. The video ad also charges that Rubio has been a no-show in the Senate. A narrator calls Rubio “another all talk, no action politician.”

Grayson has some money for such ads and to launch his campaign.

Since his last run, he has kept open a campaign account, annually filing in one Florida district or another to maintain his options and raise a little money, but not to actually mount a campaign. That account, which was tied in March for a run in Florida’s future 28th Congressional District, had $287,000 in it at the end of June, according to the most recent reports available through the Federal Election commission.

Presumably, the money is being transferred to his Senate account, which showed no financial activity by June 30. If so, that cash balance would put Grayson well behind Rubio, who had $6.2 million in his Senate campaign account, and Demings, who had $3.1 million in hers. It would put Grayson in fourth place for the Senate campaign money chase, behind Democrat Ken Russell, who finished the second quarter with $346,000 in the bank, but ahead of Democrats Allen Ellison and William Sanchez.