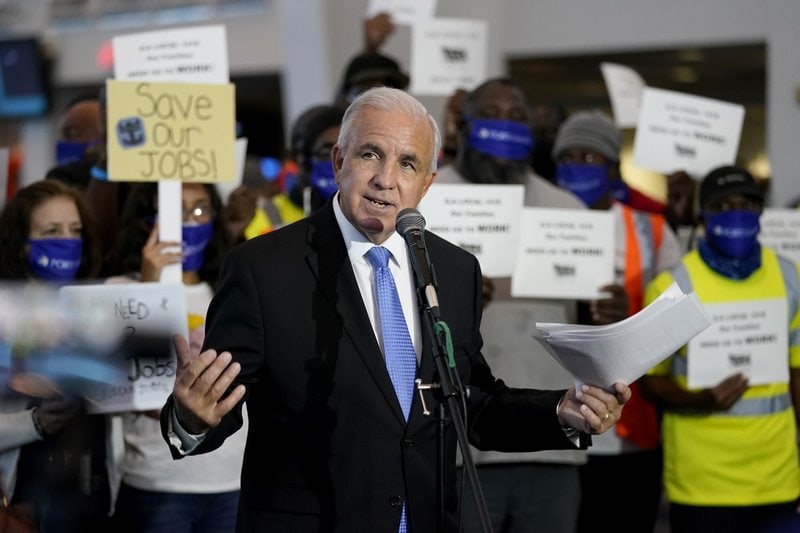 'They’re not allowed to have their own voice. They have to follow, now, the extreme left.'

U.S. Rep. Carlos Giménez has a theory for why President Joe Biden and other Democrats aren’t talking more about human rights violations in Cuba that prompted citizens of the island nation and thousands in the United States to take to the streets in protest.

It’s not for fear that intervening could prompt retaliation and destabilize the region, nor is it because after the U.S. spent the last two decades entrenched in war overseas, Biden wants to prioritizing domestic issues like infrastructure, the COVID-19 pandemic and its myriad economic and societal impacts.

No, the reason why toppling the communist regime in Cuban isn’t among Biden and his party’s most talked about subjects is simple, according to Giménez: Democrats agree with a lot of what communism is about.

“As a Cuban, I’m insulted, but as a Congressperson, somebody who’s from the political world, I understand what (Biden is) doing,” he said. “How can he go against the very ideology that the left — the extreme parts of his party, which are becoming more mainstream of his party — are actually telling us this is what we need to have here?”

Giménez’s comments, which he made on Republican National Committee Chair Ronna McDaniel’s podcast, Real America, comport with accusations of complicity and kowtowing to the far-left wing of the Democratic Party that will undoubtedly be a major GOP talking point in the 2022 and 2024 elections.

In the six months since he went to Washington, Giménez said, Democrats have only crossed the aisle “a few times, maybe two of them on really big pieces of legislation.”

Other than that, he said, they all obey House Speaker Nancy Pelosi and push a hyper-liberal agenda.

“They’ve all been extreme,” he said. “They’re not allowed to have their own voice. They have to follow, now, the extreme left, this socialist part of the Democratic Party. There are no more moderate Democrats. They don’t vote with moderate people. They’ve gone all the way to the left.”

Giménez went on with his denunciation by singling out two of the most left-leaning members of Congress. He first took aim at comments U.S. Sen. Bernie Sanders of Vermont made in 2020 about how it would be “unfair” to say “everything is bad” about Fidel Castro’s Communist revolution because it included a mass literacy program.

Giménez then set his sights on U.S. Rep. Alexandria Ocasio-Cortez of New York, a founder of the six-member ultra-progressive group known as the Squad and a member of the Democratic Socialists of America.

A few days after protests erupted in Cuba, Ocasio-Cortez criticized America’s longstanding embargo on the country and restrictions former President Donald Trump put in place, which Biden has since upheld.

“The embargo is absurdly cruel and, like too many other U.S. policies targeting Latin Americans, the cruelty is the point,” she said last month. “I outright reject the Biden administration’s defense of the embargo. It’s never acceptable for us to use cruelty as a point of leverage against everyday people.”

The Biden administration announced plans in February to lift restrictions on business and travel to and from Cuba, a move that seemed to be a return to the foreign policy the U.S. employed under former President Barack Obama.

Following Cuba President Miguel Diaz-Canel’s crackdown on protesters last month, however, Biden “unequivocally” condemned the “mass detentions and sham trials that are unjustly sentencing to prison” Cuban protesters, who he said have “the same right to freedom of expression and peaceful assembly as all people.”

Biden announced new sanctions July 22 targeting “elements of the Cuban regime responsible” for suppressing protesters, including General Álvaro López Miera, Minister of the Revolutionary Armed Forces of Cuba, and the division of the Cuban Ministry of the Interior.

That same day, the U.S. Department of the Treasury’s Office of Foreign Asset Control announced additional sanctions against López Miera and a Cuban Ministry of Interior Forces special unit referred to as the “Black Berets.”

But it’s not about the embargo, trade restrictions or easing relations with Cuba, Giménez said; it’s about bringing freedom — libertad in Spanish — to Cubans who for more than six decades have been subjugated by an oppressive dictatorship.

“We’ve had enough of this regime,” he said. “The regime needs to go, because the regime is what’s causing our misery. It’s a failed economic model.”

News and videos of the protests in Cuba, one of the largest demonstrations of unrests in the country in decades, came to America largely by social media.

Web access in Cuba broadened under Obma’s policy to ease relations between the two nations, but not long after protests began, forces under Diaz-Canel’s instruction cracked down on citizens who were demonstrating and swiftly shut down internet communications from the island.

Since then, restoring internet access in Cuba has been a priority for Giménez and others in his party who have made Cuban liberation a major part of their political platforms, including fellow Miami-Dade U.S. Reps. Mario Díaz-Balart and María Elvira Salazar.

“We need to provide those people … connectivity so they can decide what to do with their lives,” Salazar said during an Aug. 5 press conference with Gov. Ron DeSantis and Lt. Gov. Jeanette Nuñez, among others. “We’re not sending them the script, but we do have to give them the platform so they do not feel alone and they know that the United States, the rest of the world, is watching what they’re doing and that they are grabbing their destiny in their hands.”

While there isn’t as much of a problem finding an internet connection in the U.S., Giménez and McDaniels said they are troubled by a rise in censorship on social media, particularly when sites like Facebook, YouTube and Twitter determine that what’s being shared is abusive, intentionally misleading or potentially harmful to the public.

Blocking free speech is bad enough on its own, but it’s even worse when platforms that have appointed themselves arbiters of truth collaborate with or respond subserviently to the government, McDaniels said, pointing to suppression of information about Hunter Biden and theories that COVID-19 was manufactured in a lab in Wuhan, China.

“It’s gone a step further, with the Biden administration openly admitting that they are working with Facebook to stifle misinformation, which is freedom of speech,” she said.

For good or bad, Giménez said, preventing people from communicating openly is a “very slippery slope” that, over time, can turn a free and prosperous country into a destitute, subdued nation.

“It starts out with, ‘Well, it’s about your health and welfare,’ and then the next thing you know it’s about economic truth and the political path and, you know, all these people are dangerous, (so) we need to shut them down, we need to shut them up,” he said. “And it all leads to one place and … one ideology, one party having all the power, and it leads to a shutdown of debate.”

previousPalm Beach Gardens doctors did not walk off the job