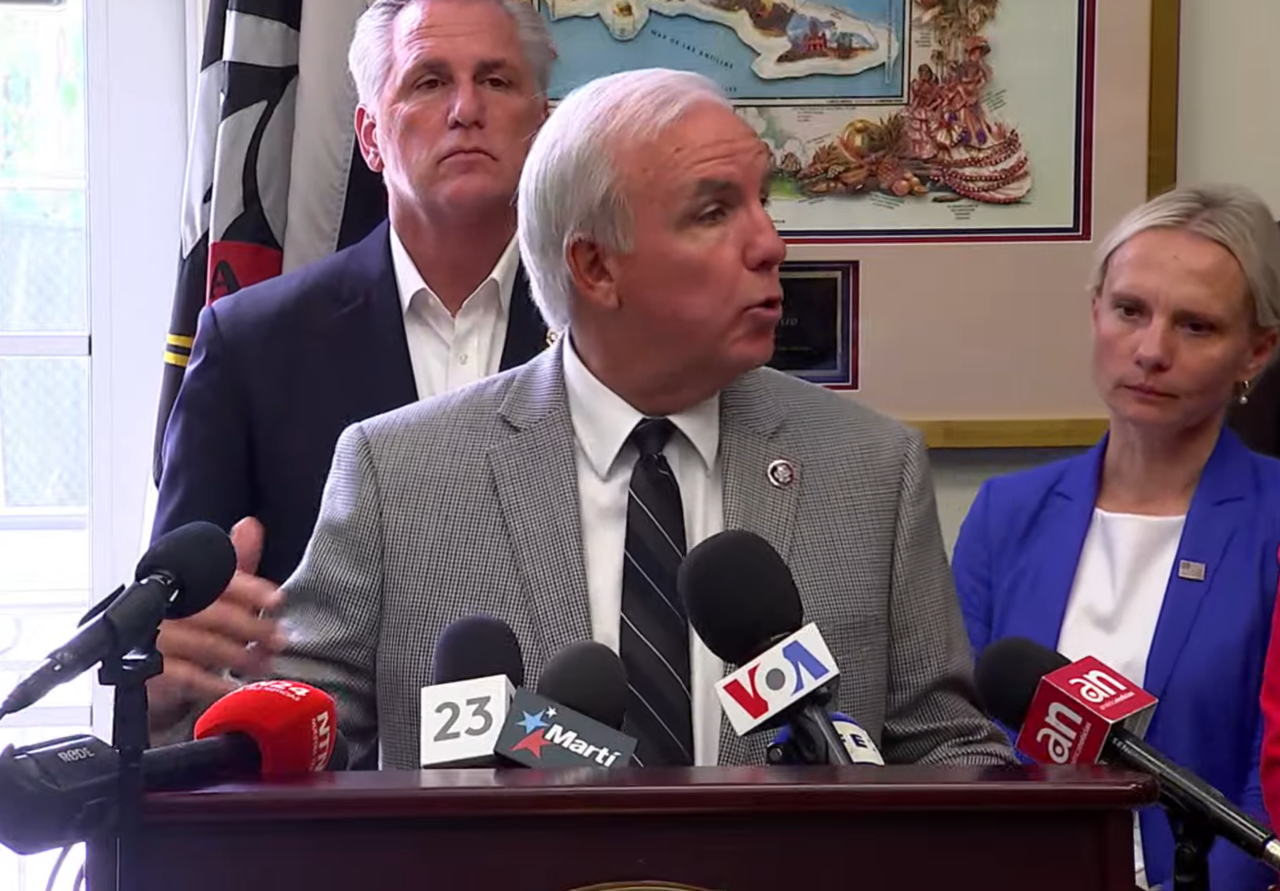 'If you want no Chinese (or) Russian influence, then you should want a free Cuba.'

Compared to the night before, the Thursday press conference on the crisis in Cuba U.S. House Minority Leader Kevin McCarthy and Cuban American Congress members from Miami-Dade held with Gov. Ron DeSantis and Lt. Gov. Jeanette Nuñez was a tame affair. But what they said was anything but reassuring.

The setting was appropriate for the subject, the central message of which has remained the same for weeks: President Joe Biden and House Speaker Nancy Pelosi must take action to help topple the communist regime that for more than six decades has subjugated the people of Cuba. At around noon, more than a dozen Republicans assembled behind a podium inside a Hialeah Gardens Museum honoring thousands of Cuban exiles who participated in the 1961 Bay of Pigs invasion.

Several of those who did speak offered solutions to some of Cuba’s most immediate problems, such as internet access, with varying degrees of specificity. Many warned that tensions in the region would worsen if America does little to intervene, leading to further destabilization of the region and inviting bolder moves by some of the U.S.’s most dangerous adversaries.

“If you want influence of the Communist Party of China in the Western Hemisphere and Russia, then support the regime in Havana, because … every nefarious influence in the world comes through there,” DeSantis said. “If you want no Chinese (or) Russian influence, then you should want a free Cuba.”

That should make the issue of Cuban liberation neither a Republican nor a Democratic one, McCarthy said.

“This is an issue about America, about freedom and the future of the world,” he said. “(Cuba) is 90 miles away from our country. This is the tip of the spear, of the head of what feeds the socialism throughout Latin America, which means more oppression.”

Giménez joined McCarthy in calling on Biden to declare Cuban President Miguel Díaz-Canel an illegitimate leader — the first step, he said, in toppling the communist regime there and other totalitarian governments in Latin America.

“The regime of Cuba is responsible for what’s happening in Nicaragua, Venezuela, what’s about to happen in Peru, what could be happening in Chile, what is happening in Colombia right now, the seeds that are being planted there,” he said.  “(It creates) instability in our own backyard (and) more repressive regimes.”

Last month, Cubans took to the streets for the largest series of protests the island nation had seen in decades. And for the first time, the world was able to watch what was happening and witness the hardships people there suffer — the extreme shortages of food, water, electricity, medicine and other everyday needs — through online livestreams.

Díaz-Canel, who succeed Raúl Castro in 2019 as yet another communist leader to gain unelected power in Cuba, swiftly cracked down on the protests and blocked most of internet access. Since then, few updates have reached the rest of the world.

For any Cuban liberation campaign to succeed, Salazar said, internet access to Cuba must be restored.

“We need to provide those people that same connectivity so they can decide what to do with their lives,” she said. “We’re not sending them the script, but we do have to give them the platform so they do not feel alone and they know that the United States of America, the rest of the world, is watching what they’re doing and that they are grabbing their destiny in their hands. So, may the lord help President Biden to understand, because if you do not do it, we will do it from Miami and from the state of Florida.”

McCaul, a ranking member of the House Foreign Affairs Committee, again raised the idea of delivering internet access by balloons. But another great solution is already there, he said, referring to Psiphon, a mobile app that enables users to circumvent government restrictions on internet.

“About a million people have (it) right now to freely and securely communicate both inside and outside of Cuba with their relatives,” he said.

Beyond that, there are myriad other ways to repair the digital bridge to and from Cuba, Díaz-Balart said. He declined to go into specifics.

“I’ve had classified briefings on this,” he said. “Here’s what I can tell you: There’s not one option or two options or three options. There are multiple options available to provide communications for the Cubans throughout the island. Some of those options have been used in other places, by the way.”