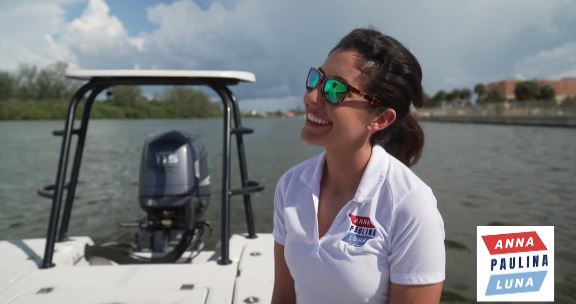 Congressional candidate Anna Paulina Luna released a new campaign video Tuesday calling on the federal government to step up in response to the red tide crisis.

In the 90-second clip, Luna rides along via boat with charter fishing guide Captain Ray Markham to discuss the red tide problem afflicting the Pinellas County coast this summer. The algae bloom led the county to collect more than 1,712 tons of dead fish and caused an uptick in respiratory problems.

“Water’s actually one of the bloodlines here in Florida,” Luna, who is running for Florida’s 13th Congressional District, said in the video. “Especially for Pinellas County. And the majority of our tourism comes from the fact that we are on the water. One thing that we really were affected by this past season was red tide.”

“It was actually DeSantis, and the Florida State Legislature that actually passed a bill to fund the research to combat red tide, and it’s NOAA that’s not actually giving matching money to the state of Florida, which is a federal issue,” Luna said in the clip. “Our current representative was doing nothing to help the local community in that regard.”

Luna is likely referencing SB 155, which DeSantis signed back in 2019. That legislation established the Florida Red Tide Mitigation and Technology Development Initiative, a partnership between the Florida Fish and Wildlife Conservation Commission and Mote Marine Laboratory to develop technologies and approaches to control and mitigate red tide and its impacts. The bill also provided a $3 million annual appropriation for the program for six years, for a total of $18 million in funding.

DeSantis also reinstated the Red Tide Task Force in 2019 after it was inactive for more than a decade. Since 2019, the state has dedicated more than $14.5 million to the Center for Red Tide Research at FWC.

However, DeSantis faced criticism from local and national officials for his refusal to declare a red tide state of emergency. He maintained adequate resources were already in place to deal with the crisis.

Luna also calls out incumbent U.S. Rep. Charlie Crist, who is leaving the CD 13 seat to run for Governor in 2022, arguing he did nothing in response to the problem.

In July, Crist wrote to DeSantis urging him to request the National Oceanic and Atmospheric Administration designate the outbreak a “Harmful Algal Bloom Event of National Significance” under a 2019 federal law. That designation, which governors can request, would open the door to federal dollars to address the outbreak, impacting the environment and public health.

After the state’s 2018 red tide outbreak, but before this year’s problems, Crist introduced a bipartisan bill to create Centers of Excellence on Harmful Algal Bloom to research red tide and identify mitigation strategies. In 2019, he helped secure $10 million for red tide research. Luna didn’t reference any of those acts in her video.

“It’s a huge deal and obviously something that we want to keep clean and something that I’m very passionate about,” Luna said in the clip. “It is important to get people that are actually within the community and actually understand what’s happening not just above the surface, but below the surface as well.”

Luna so far faces Amanda Makki in the Republican Primary for the hotly contested district. The two were opponents in the 2020 Primary Election, with Luna ultimately winning her party’s nomination before losing to Crist last November.

The congressional district currently has a Democratic advantage. But heading into last year’s presidential election, Republicans, through a massive voter registration effort that will continue into the 2022 midterms, chipped away at the Democratic advantage in the Pinellas County district from 5.2 percentage points to just 4.6.