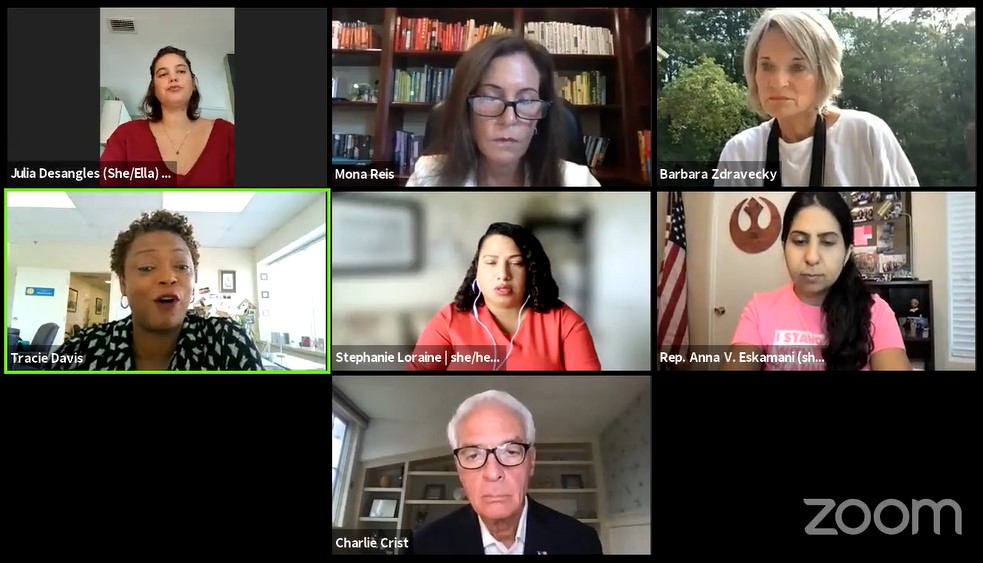 Choice advocates in Florida say it’s time to step up the fight for abortion access in new ways. In the wake of the U.S. Supreme Court declining to stop an extreme Texas law restricting abortions weeks into pregnancy, supporters said it’s clear they can no longer rely on the courts.

“The fact that SCOTUS did nothing to stop it not only should be alarming for all of us but It’s also a reminder that we have to go beyond Roe v. Wade,” said Rep. Anna Eskamani, an Orlando Democrat. “The reality is that even with Roe as the established law of the land, none of those rights have actually been enumerated in law. And at the same time, Row v. Wade never guaranteed abortion to every person.”

Those comments came during a press conference convened by U.S. Rep. Charlie Crist, a St. Petersburg Democrat and candidate for Governor, on the path forward with reproductive rights.

Stephanie Piñeiro, an advocate with the FL Access Network, shared her own story of an abortion as a teenager. In an environment where she could not safely ask her parents to help her obtain an abortion, Florida’s parental consent law required her to petition courts for a judicial exemption. That proved financially challenging, but most important in context of the Texas law, it took three weeks to obtain court permission. Like most pregnant women, she only learned she was pregnant at six weeks.

“Since then, the stigma attempts to eliminate legal abortion have only gotten worse,” she said.

And already, opponents of abortion in Florida expressed an eagerness to move based on the Supreme Court inaction, one many view as signaling an intent to gut Roe v. Wade.

Senate President Wilton Simpson told WFLA when asked about a “heartbeat” bill in Florida that the Legislature was “already working on it.” Speaker Chris Sprowls through a spokesperson expressed support for anti-abortion laws in general to Florida Politics. And Gov. Ron DeSantis, while stressing no one should read too much into the court’s failure to stay a law, said he “does support protections for life as best as we can do.”

Should new restrictions go into effect, Rep. Tracie Davis, a Jacksonville Democrat, said they surely will impact poor and minority communities the most.

“As an African American woman, I think about the disproportionate impact that this will have on women of color that are already struggling with poor health care outcomes due to endless systematic injustices,” she said. “These individuals will not be able to hop on a plane and go to the nearest state that allows abortions, further monopolizing health care for the White and the wealthy.”

Of note, the virtual roundtable also included abortion fund leaders working to provide women in Texas right now with access to ways to terminate pregnancies. Julia DeSangles said such funds across the country are working together to provide travel access or medication availability while also helping girls and women in Florida access care.

In Florida, advocates said a privacy right in the state constitution stands out as the strongest in the South. But it has never been tested before the Supreme Court.

Barbara Zdravecky, a former CEO of Planned Parenthood Southwest Florida and Central Florida, noted that despite advocates’ best efforts, the law does shift in Florida. Her organization successfully fought parental consent laws in the state three times, but abortion opponents eventually opened the door to the current law after an amendment to the state constitution was passed by Florida voters.

Crist, for his part, has co-sponsored the Women’s Health Protection Act (HR 3755) at the federal level. House Speaker Nancy Pelosi vowed to bring that matter to the floor when Congress reconvenes on Sept. 18.  The Congressman also promised if elected Governor to veto any state laws that restrict access to abortion.

“If I have the honor to serve as Florida’s next Governor, one of the things you get when elected Governor is a pen,” he said. “I’ll call it a veto pen on any legislation that would restrict a woman’s right to choose.”

Democrats in the Florida Legislature noted they have helped stop radical legislation introduced in the state recently, even as some lighter restrictions advanced. No heartbeat bill has been passed in either chamber of the Legislature, for example.

That’s in part because many Republicans represent moderate districts and don’t support a complete overturn of Roe v. Wade. But as that becomes more of a reality, it’s important, Eskamani said, to hold those moderate lawmakers to account and demand they still support access to abortion or vote them out.

“Texas officially has the most extreme abortion ban in the country, banning abortion at six weeks, but also going a step farther to put a bounty on the heads of those that help anyone actually access an abortion after six weeks in Texas,” Eskamani said. “This is one of the most extreme, absurd and offense laws on the books.”

But she noted Texas is not alone, and abortion opponents shouldn’t be allowed to move the goal posts and consider that a base line. A Mississippi law coming before the courts bans abortions at 15 weeks, and should be viewed as equally extreme, Eskamani said. Likewise, supporters of reproductive freedom should not settle in Florida for laws with narrow exceptions for rape and incest.