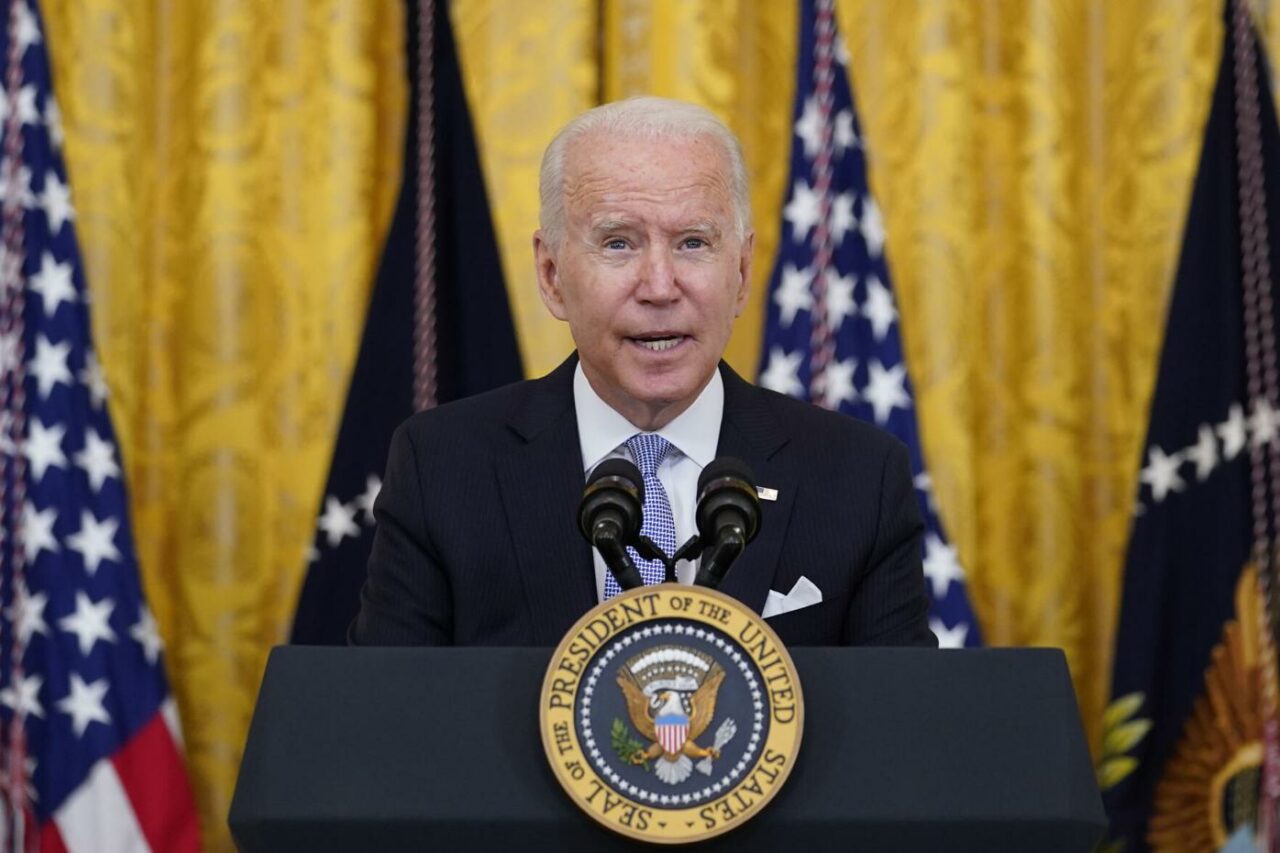 The President expressed frustration with 'cavalier' attitudes toward public health.

President Joe Biden continued on Friday to goad Republican Governors resisting COVID-19 vaccine mandates he rolled out the day before.

When asked about them being challenged in court by a reporter at a Washington D.C. school, Biden offered a pithy three words in response: “Have at it.”

Then Biden got serious and expanded his remarks, condemning “cavalier” governors. He didn’t name them, but his words made it clear Florida’s Gov. Ron DeSantis was on his mind.

The President attempted to preempt critics with a call for civility also, saying Friday that “politics doesn’t have to be this way.”

“Let me conclude with this. One of the lessons that I hope our students can unlearn is that politics doesn’t have to be this way. Politics doesn’t have to be this way. They’re growing up in an environment where they see it’s like a war, like a bitter feud. If a Democrat says right, everybody says left,” Biden said. “It’s not who we are as a nation. And it’s not how we beat every other crisis in our history.”

“We have to come together,” Biden added. “Look at the polling data. The vast majority of the American people know we have to do these things. They’re hard, but necessary, but we have to get them done.”

Biden’s words Friday continued his narrative from his Thursday speech rolling out the vaccine mandate push, including tough talk toward renegade Republican Governors.

“School officials are trying to keep children safe in a pandemic while their Governor picks a fight with them and even threatens their jobs,” Biden said, regarding moves like Florida’s to block districts from mask mandates. “Talk about bullying in schools. If these governors won’t help us beat the pandemic, I’ll use my powers as President to get them out of the way.”

Florida has vowed to defund school districts in an amount equal to school board members’ salaries in wayward districts, but the U.S. Department of Education will backfill those funds.

DeSantis did not do a cable television hit or press availability Thursday night responding to Biden, and as of this writing Friday morning, nothing has been announced to media. But the Governor has crowed about “standing in the way” of the White House on this issue, and there’s no reason to think that stops anytime soon.

Expect the state to robustly challenge federal mandates as they evolve, with DeSantis vowing action against “coercive” requirements and questioning the legal authority of the federal government to mandate vaccines via rulemaking.

“How could we get to the point in this country where you would want someone to lose their job because of their choice on the vaccine,” DeSantis asked at a press conference this week. “I do not believe that people should lose their jobs over this issue, and we will fight that.”

Such a fight is winnable, DeSantis has also suggested.

“I’d imagine that you’re going to see a lot of activity in the courts if they tried to do that through an executive action,” DeSantis said. “Congress has never legislated this. This would just be him doing it on his own, and that’s not, I think, the way to do it.”

The Governor’s “Friends of Ron DeSantis” political committee is also fundraising off the fight.

“I WILL continue to remind Joe Biden that I am here to stay, and I WILL continue to defend our Constitution and the jobs of my fellow Floridians. If we give in to this federal overreach now, the power that be will be emboldened to evade the Constitution even more. When Joe Biden calls me out for standing up for Floridians, he doesn’t even have the courage to call me by my name. But Joe Biden knows I’m here to fight back against his government overreach and I will not step aside as he violates the Constitution and places millions of jobs in jeopardy,” read a fundraising solicitation sent out just after Biden’s remarks Friday.

Biden “does not have the legal authority to force vaccines on millions of Americans. His proposal is outrageous and unlawful. I will be closely watching these developments and taking any and all action within the authority of my office to stop this unprecedented power grab,” Moody tweeted Friday.

Biden’s plan requires vaccines or weekly testing for K-12 school staff and teachers, as well as companies with more than 100 employees.