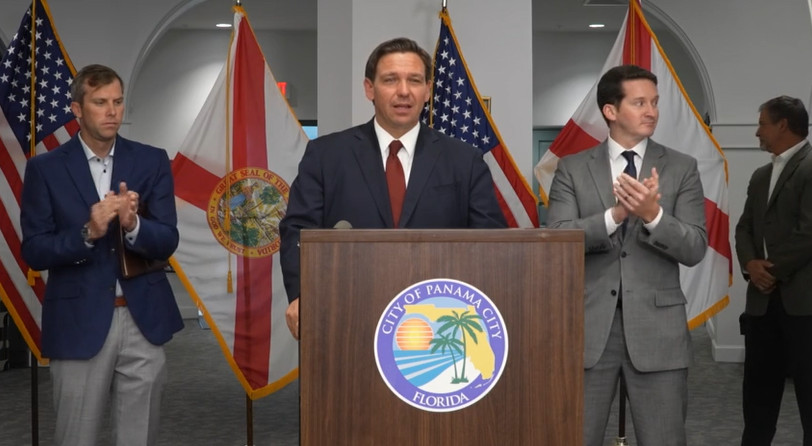 The Governor stood by a speaker who made anti-vax claims, but didn't hear them.

In Doral Tuesday, Gov. Ron DeSantis had a chance to clean up the perception that he agreed with misinformation from a featured speaker at his own press conference the day before.

However, it’s unclear if the response will mollify critics.

The Governor told reporters that he essentially wasn’t listening to controversial comments a speaker made in Newberry suggesting COVID-19 vaccines scramble the genetic codes of the vaxxed.

“Honestly, I don’t even remember him saying that, so it’s not anything I’ve said,” DeSantis said about the controversial statement at a press conference announcing big $5,000-per-incident fines for cities mandating COVID-19 shots for employees.

The question that DeSantis sidestepped was from POLITICO reporter Marc Caputo: “At yesterday’s press conference, the guy next to you said that the vaccines changed (his?) RNA. As you’ve said, you’re a data-driven guy. That doesn’t line up with the data. Two questions. Do you believe that? And if you don’t believe it, how come you didn’t say anything at the moment?”

Darris Friend, an employee at Gainesville Regional Utilities, defended refusing a vaccine on those grounds.

“The vaccine changes your RNA, so for me, that’s a problem,” Friend said.

Friend was trafficking in vaccine misinformation. As the Centers for Disease Control and Prevention makes clear, vaccines do not change an individuals’ core genetic material because they do not interact with the nucleus of body cells.

None of the public officials corrected the remarks, preferring instead to advance on-topic crowd-pleasing soundbites when they spoke in support of DeSantis and the proposal.

The Governor went on in Doral to distance himself from Friend’s vaccine skepticism.

He said the “data is very clear” that vaccines prevent hospitalizations. DeSantis went on to defend the vaccine’s efficacy further, before saying that some refusing the vaccine may be making the wrong decision.

“There are some of those folks who may make a decision that’s ultimately not the right decision for them,” DeSantis said. “There are some people who are hospitalized who probably would not have been had they done that.

“I just don’t think that decision should be used to cast aside people who have served their community for years and years and years,” DeSantis said. “My view is you stand by the folks that have stood by us. Not every decision they make would be the same decision I would make.”

DeSantis may not have thrown Friend under the bus. But in terms of the realities of the national political ambitions that drive this Governor, that gentle, circuitous, day-late-and-a-dollar-short rebuke was about the best that could be hoped for.

Meanwhile, the disavowal of the speaker’s claim is on trend for DeSantis. The Governor has gone so far as to distance himself from responsibility for his own Twitter account when pressed on statements.

In January 2020, he tweeted that “voting is a privilege,” but told Florida Politics that he didn’t actually make the statement.

“It’s kind of a word salad. It’s not necessarily how I talk,” DeSantis said at the time.

The sole Cabinet member not on hand for Monday’s false claim again called on the Governor to more firmly repudiate Friend’s statement.

“It seems like every day our Governor spreads some new dangerous conspiracy theory about COVID-19. The COVID vaccines do not change your RNA, and it is deeply irresponsible for DeSantis to use his platform to elevate the false notion that they do. It is extremely concerning that he continues to spread disinformation and ignore the advice of doctors and scientists. This is completely unacceptable behavior from someone who is supposed to be leading our state out of this pandemic, and he should correct the record immediately,” asserted Agriculture Commissioner Nikki Fried.