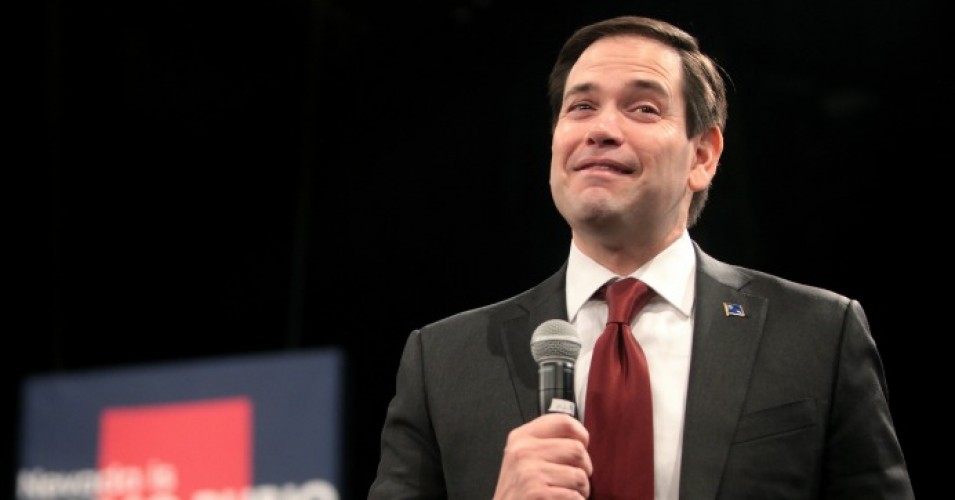 'You have nothing better to do? Out of Bible passages?'

Republican U.S. Sen. Marco Rubio wandered back to the subject of transgenderism Thursday while responding to an advisory from the Centers for Disease Control and Prevention, and it went about as well as most would have expected.

Many would read the headline, nod their head and think, “Huh. Good on the CDC for using a gender-neutral term to recognize that trans men and nonbinary people can — and do — get pregnant.”

Not Rubio. Doing his best J.K. Rowling impression, Rubio fired off a tweet just after 4 p.m.

“‘Pregnant people’?” he wrote. “If the @CDC ever discovers a pregnant man, I assure you his vaccination status will not be the main thing he should be worried about.”

Rubio’s tweet received hundreds of interactions, including several comments lambasting him for being ignorant at best, intolerant at worst.

One assumed the former, writing: “There are people who have a uterus but identify as male. There are literally people right now who identify and look like men who are pregnant. Educate yourself and then resign.”

Another wrote: “This is the message you choose to run with, not the fact that they want pregnant people to get vaccinated?”

A third referenced Rubio’s penchant for posting passages from the Good Book. “You have nothing better to do?” she wrote. “Out of Bible passages?”

Yet another noted that by getting wrapped up in nomenclature, Rubio had missed the entire point of the advisory: “How about worry about the growing body count in your state instead of picking apart the wording in the CDC guidelines?”

A month and a half ago, Rubio took a test run at cracking jokes at the CDC and transgender people’s expense with a prototype of his Thursday quippery.

Sharing an Aug. 11 CDC advisory for “people who are pregnant,” Rubio tweeted: “The @CDC today urged pregnant & recently pregnant men to get vaccinated because they are more likely to get severely ill with COVID-19 compared with non-pregnant men”.

Perhaps not thinking that was a deep enough dig, he followed up with: “Also according to the CDC, recent reports have shown that breastfeeding men who have received mRNA COVID-19 vaccines have antibodies in their breastmilk, which could help protect their babies.”

Rubio took it upon himself to add the phrases “pregnant men” and “breastfeeding men” to his summation of the CDC information. The webpage he screenshotted for his tweet includes neither.

As a South Florida man, Rubio’s used to the heat and likely has little issue getting roasted every now and then. In between the myriad jabs, however, some offered levelheaded takes.

“Even if you had a problem with transgender people existing, what’s wrong with this statement?” one person asked. “Women are people too, are they not?”

If the @CDC ever discovers a pregnant man, I assure you his vaccination status will not be the main thing he should be worried about. pic.twitter.com/w4X5SHat55

nextLast Call for 9.30.21 — A prime-time read of what’s going down in Florida politics