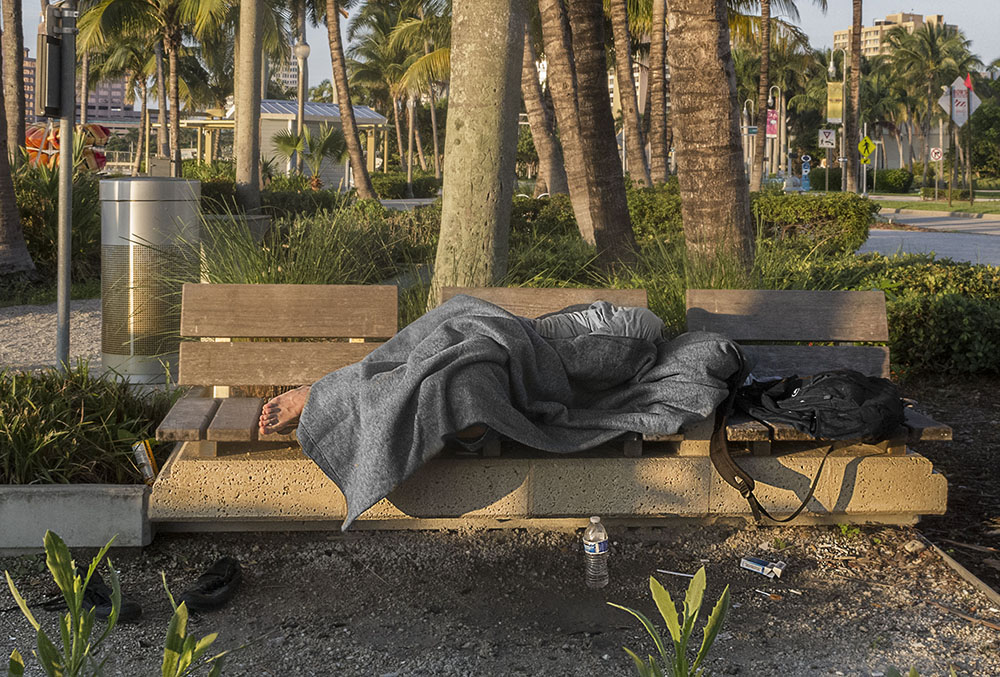 It’s a major problem, and it’s getting worse.

It was a surreal sight, though not at first. Rep. Marie Woodson was walking through a park near Broward College while on the campaign trail last year when she spotted a young man, no older than 20, going to his car with textbooks.

But rather than get in and drive off or switch books and head back to class, he calmly — as if it were routine — prepared the vehicle as a makeshift bed.

He was living out of his car, Woodson realized.

“Do you know of any students that go to your school who are homeless?” she asked.

He told her yes, it’s a major problem, and it’s getting worse.

Over the past academic year, 167 Broward College students applied for tuition waivers. Florida law provides that students who are homeless may be exempt from paying tuition and fees at state colleges and universities, but that doesn’t cover other associated costs, such as textbooks, housing and food.

After speaking with Haile, Woodson reached out to Mark Rosenberg, the President of Florida International University. He reported the same thing was happening there: Hundreds of students were either homeless or transitioning out of foster care, with tenuous living circumstances.

Almost by accident, Woodson had stumbled onto a major issue she couldn’t ignore.

“I don’t believe in seeing a problem and not doing something about it, especially when it comes to a younger generation,” she told Florida Politics. “Homelessness is so rampant, and when you have a younger person trying to better themselves and they don’t have a roof over their head, that troubles and hurts me so much.”

Woodson, a Hollywood Democrat, plans to introduce legislation to address the matter. Right now, she’s determining her best approach. It may involve seeking an allocation from the state to give directly to universities and colleges. It could also be a public-private partnership or arranging aid from individual, organizational or corporate benefactors.

She has reached out to local and national experts to get a better idea of how pervasive the problem is, but she’s still waiting on answers.

Last year, 41,243 students nationwide identified as unaccompanied homeless — just one subcategory of homelessness — on their forms for Free Application for Federal Student Aid (FAFSA), which helps schools to determine whether a student is eligible for financial assistance. Over the prior five years, the number of students applying for aid rose 22.5%.

Of those who were counted as homeless last year, 2,546 lived in Florida. Another 31,405 requested homelessness consideration but were listed as “undetermined.”

Florida Politics requested homeless student counts from the Florida Department of Education and Board of Governors, which oversees the State University System of Florida. Neither provided any information.

But the true number of homeless college students is far larger than what reports would show and almost impossible to quantify, said Dr. Rajni Shankar-Brown, the endowed chair of social justice education at Stetson University and Vice President of the National Coalition for the Homeless.

“One of the major issues is, we don’t have a clear way of doing counts at institutions of higher education to actually get the number of students who are experiencing homelessness,” she said. “Homelessness is not a static experience. Folks tend to go in and out of it, especially in colleges where students may be couch-surfing and then are able to maybe get into stable housing. There isn’t a solid system of keeping track and counting, and many times college students don’t come forward and publicly identify they are in a homeless situation.”

There’s evidence of how fluid the number is at Broward College, said school Vice President Janice Stubbs. In a 2020 survey the college conducted, 12% of 1,547 student respondents said they had not lived in stable housing they owned, rented or stayed in as a regular part of a household within the previous two months. Fifteen percent worried they would not be in stable housing over the next two months.

Many students are caught in a poverty loop that began before they ever stepped on a college campus, and their ranks are growing. Between 2007 and 2015, the number of Florida students in pre-kindergarten through high school who experienced homelessness more than doubled to 72,601, according to a 2019 report by the University of Florida Shimberg Center for Housing Studies and Miami Homes for All. The report also found that students who experienced homelessness performed 56% worse than their securely housed peers on standardized state tests.

A more recent study by Florida’s Council on Homelessness, published June 30, cited Florida Department of Education figures, which counted nearly 80,000 K-12 students as having experienced homelessness during the 2019-2020 school year.

Both identified a widespread deficit in affordable housing as the main cause.

The highest-risk population of students in any school system in the country — by far — are students who were either homeless or are aging out of foster care and transitioning from high school to college, said Mark Zaher, who retired in August as director of School Operations and Special Programs at Miami-Dade Public Schools.

“These are kids that are always falling behind academically,” he said. “They have a high percentage of kids in special education. Transitioning out of high school is a huge challenge for them. And yes, there’s assistance for those kids, but there’s a huge gap.”

Nationwide, 30% of former foster youth were homeless while attending college, the Florida Department of Education reported in 2017. Roughly the same percentage received student loans and experienced food and/or housing insecurity while working and receiving financial aid.

National research has determined that less than 10% of children who were homeless or in foster care earn a college education, said Rosenberg, who pointed to FIU’s Fostering Panther Pride program — which offers counseling, book stipends, good grade stipends and additional support — as one way the school is helping to improve the problem.

The school’s President’s Council provides additional scholarship funding and runs a food pantry program exclusively for students in the program. FIU students in need can also access other funding sources, such as Pell Grants and First-Generation Scholarships.

Broward College offers similar aid through its Seahawk Outreach Services program. And there are many others across the state, from Lake Sumter State College and Daytona State College to Florida Atlantic University, whose Educate Tomorrow program helped hundreds of students who experienced homelessness last year improve their chances at graduation.

“But there’s a huge need for support for these students, because they don’t really have any other support to address all the college costs — plus advising, plus counseling, plus simply the day-to-day encouragement that’s so important for everybody, really,” Rosenberg said. “We know the cycle of poverty can be broken with a college education, and that’s why we’re passionate about this. We see it as a way for young people to achieve their version of the American dream and escape the difficulties they find themselves in.”

The number of students in need of support will grow faster than usual in the coming months, Shankar-Brown said, as many safeguards put in place early in the coronavirus pandemic — rent freezes, eviction moratoriums, halts on municipal utility shutoffs, stimulus checks and other forms of aid — come to an end.

“It’s a distressing situation we’re facing, one of the most harrowing national crises,” she said. “Pre-pandemic, our numbers — whether you’re talking about young children or college students — were already surging unacceptably, and disproportionately high in communities across Florida. Now, since the COVID-19 pandemic, we are seeing the number magnified, exacerbated at enormous levels. Pair that with all the compounded issues around the pandemic and this merits all of our attention.”

“Due to COVID, the students are reporting they are lacking a stable place to live,” she said, adding that two students who sought help through the program cited the condo collapse in Surfside as the reason for their housing insecurity.

They are hardly alone in having heartbreaking stories. Ramos said she helps students who have suffered years of domestic abuse, displacement, were kicked out of their home for disclosing their sexual orientation to a parent or lost their jobs and had no other way to support themselves.

Tuition waivers are “imperative,” Shankar-Brown said, but much more is needed.

“We need to get rid of some of the barriers for students to have access to those waivers, and we need to push for that,” she said. “We need a massive and genuine federal investment into ending and preventing homelessness, and education is a big piece of that.”

For any problem to improve, Woodson said, those in charge must work to address it, not defund it.

“We are the United States of America,” she said. “If a kid is trying to better themselves and is in school, they should have a roof over their head, and we have an obligation as a state, as counties and as cities, to do something about it.”