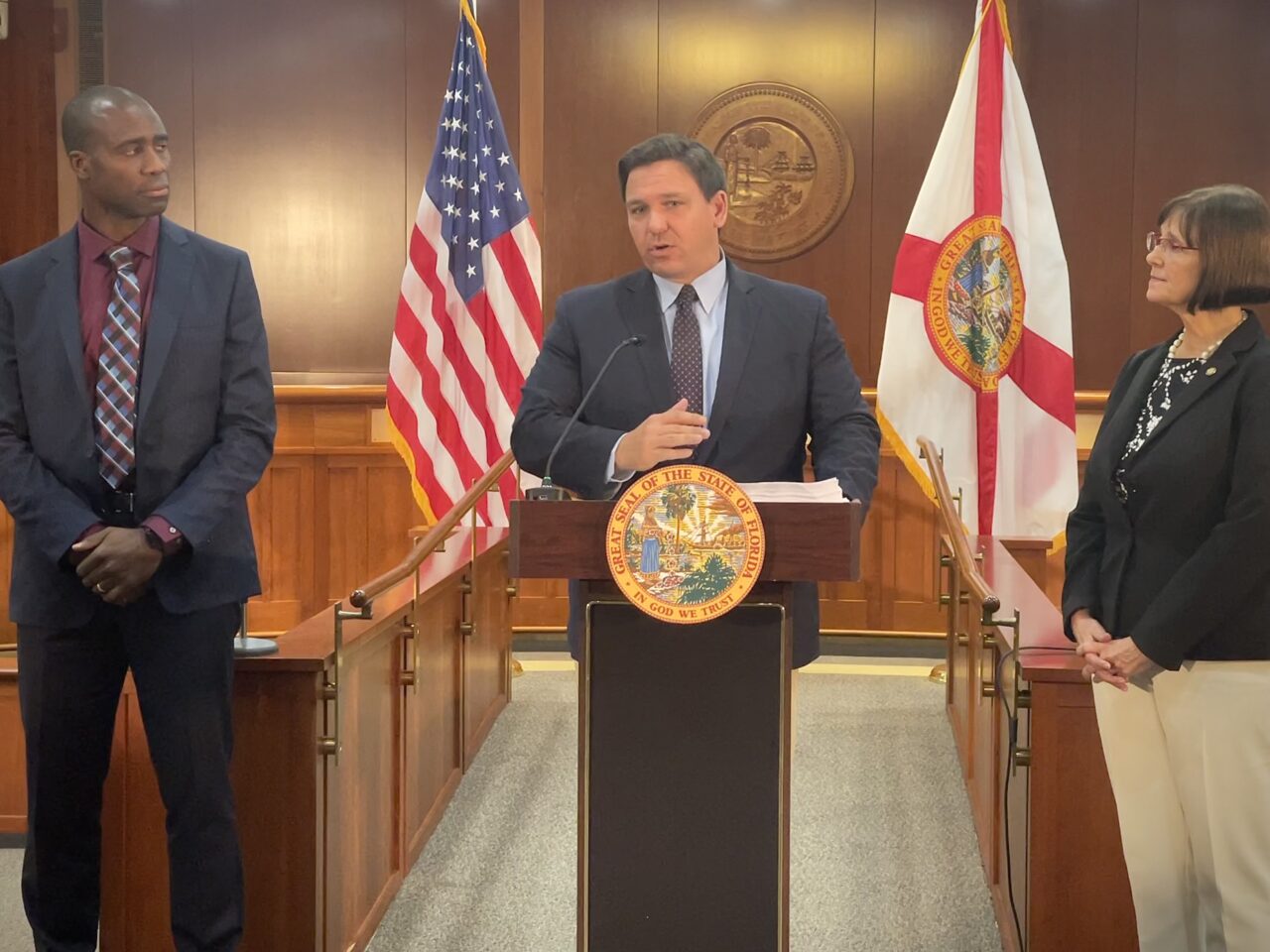 'People are so sick of constantly being bossed around, restricted, mandated.'

Alongside Surgeon General Joseph Ladapo in Tallahassee, DeSantis vowed to protect the livelihoods of the unvaccinated and defeat the emergency health mandate in court. At least two other states will join the suit — Georgia and Alabama.

“People are so sick of constantly being bossed around, restricted, mandated,” DeSantis said. “It’s important to speak up for people’s individual right to make decisions for themselves.”

Under the rule, employers with more than 100 workers must ensure employees are fully vaccinated or provide weekly COVID-19 testing. The mandate, officials say, will impact roughly 84 million workers, or two-thirds of private sector jobs. The rule will take effect Jan. 4 — a timeline DeSantis suggested undermines the alleged need and urgency professed by proponents of the mandate.

DeSantis suggested Florida may seek ways to thwart the federal fines. He pitched the creation of a “defense fund,” a counterpunch that would essentially remove the teeth of Biden’s vaccine order.

“I think there’s ways that we can create some support to be able to basically pay some of these fines off,” DeSantis said.

The Governor’s remarks garnered praise from Republican leadership in the Legislature. Senate President Wilton Simpson and House Speaker Chris Sprowls released a joint statement after the announcement, lambasting the health mandate as an unconstitutional overreach of government. The Legislature will convene for a Special Session latter this month to craft ways to bypass the order.

“The Legislature has always been a voice for employees and business owners across Florida who are busy working and who don’t have the time or the resources to review and implement a 490-page emergency rule or to independently fight back against unconstitutional federal mandates,” said the conservative pair. “We will not stand by while the Biden Administration pits hardworking Floridians against their employers.”

The legal move, however, also drew arrows. Agriculture Commissioner Nikki Fried — a Democratic gubernatorial contender — swiftly criticized the announcement in a news release. Fried is among the more vocal opponents of DeSantis.

“We are in this position due to a failure of leadership from Governor DeSantis who has been providing a platform for conspiracy theorists and extremism by denying the efficacy of vaccines and science-based public health policies,” Fried said. “The Governor himself is now trying to enact his own mandates to block businesses, local governments, and school boards from protecting their own constituents. Once again, Governor DeSantis is putting his personal ambitions ahead of the well-being of Floridians.”

Speaking for roughly half an hour, DeSantis argued a multitude of points to reporters.

The Republican Governor asserted the mandate will do more harm than good. Rather than compel Americans to get the vaccine, DeSantis insisted many will push back even harder.

“You think the first thing they’re going to do is run out and get the jab after they’ve already been fired over it?” DeSantis asked. “Of course they’re not going to do that. I don’t even see how this moves the needle in a positive direction for those folks. This is going to cause more economic pain.”

DeSantis characterized the order as unconstitutional and a flagrant example of government overreach. He accused the Biden administration of peddling medical policy under the guise of workplace regulation with emergency powers.

The government, he added, will soon push the mandate even further, describing the present rule as only the “tip of the iceberg.”

“Those individuals who have gone through the normal vaccination series for COVID, you will be determined to be vaccinated very soon,” DeSantis said. “They’re going to tell you you’re unvaccinated and you have to get a booster. Otherwise you could face loss of employment or other types of penalty.”

Health care workers at facilities and hospitals that accept Medicare and Medicaid will be required to get vaccinated under a ruling issued by the Centers for Medicare & Medicaid Services.

Additionally, employees of the executive branch and contractors in business with the federal government will also be required to get vaccinated — with no option to test out.

The 490-page rollout comes weeks after Biden lashed out at unvaccinated Americans. They, Biden charged in September, are causing “a lot of damage.”

“We’ve been patient, but our patience is wearing thin, and your refusal has cost all of us,” Biden told unvaccinated Americans.

Attorney General Ashley Moody plans to file the suit Friday. In a statement, she questioned the authority of OSHA to implement the mandate and described it as unlawful.

“The remarkable ease at which this president will abandon the rule of law and separation of powers is astonishing and devastating to the autonomy of American workers,” Moody said. “For this reason, I will take swift legal action to stop this unprecedented overreach by the federal government—to protect Florida and our workers from the unlawful edicts emanating from President Biden and his handlers.”