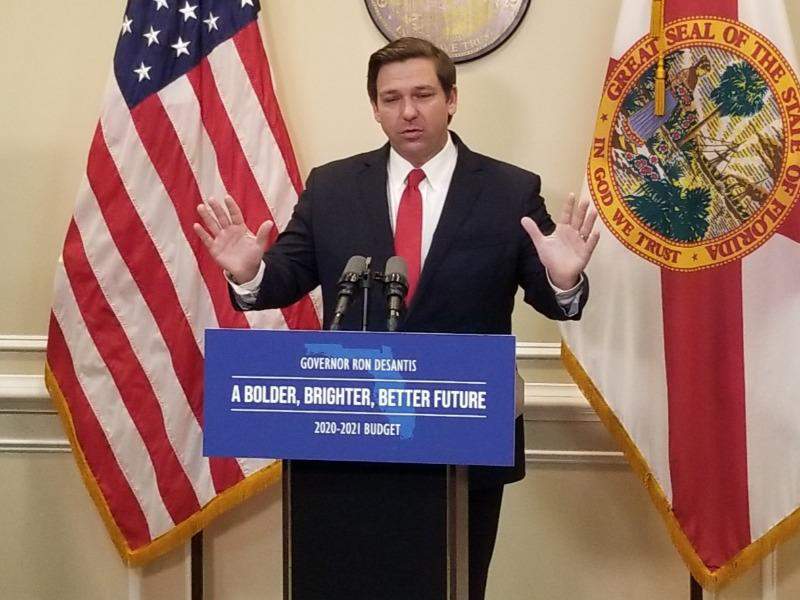 The Jacksonville Classical Academy is affiliated with Hillsdale College.

DeSantis has frequently used the Jacksonville area as a backdrop for his orations on pandemic politics, and his latest visit brought him back to a familiar location: the Jacksonville Classical Academy, which is chaired by the former U.S. Ambassador to the Bahamas, John Rood.

The charter school in Mixon Town is affiliated with conservative Hillsdale College.

DeSantis spoke at the school a year ago, saying that it being open was proof schools should hold in-person classes.

This year, speaking in a city where public schools have been crushed by a staffing shortage leaving classes unattended, the Governor spoke at a charter school, which is still public but is privately operated. He did not address local staffing issues, keeping comments bullet pointed and big picture.

DeSantis offered an overview of the upcoming FY 22-23 education budget, promising to “keep the momentum going” with a “lot of wins for students, families, and teachers.”

“Since day one, I have been focused on making Florida a leader in education, and I am proud to announce my proposals to invest record funding into our education system over the next year,” said DeSantis. “By continuing to boost teacher pay, give bonuses to principals and teachers, prioritize workforce education, foster a strong civics curriculum, and replace the FSA with progress monitoring, we’re making a significant difference in the lives of our students.”

Among the proposals: $600 million to boost teacher pay, which DeSantis hopes will increase the average median salary beyond the current $47,000.

“We may even be one of the top five in the country,” DeSantis mused.

The Governor referenced principal bonuses also, saying $1,000 bonuses in the current budget will recur in the proposed budget for FY 22-23.

“We’ll have $8,000 in per-pupil funding,” DeSantis said, with an increase of $124 to the Base Student Allocation, which is the largest in a decade.

The Governor’s budget proposal also contemplates $421 million for school safety and mental health initiatives and $15.5 million to replace the Florida Standards Assessments with a new Progress Monitoring System. That money will be recurring, he said.

The biggest contemplated spend may be for workforce education, where $534 million will be earmarked for support for various initiatives.

“The teachers are extremely pleased with what has happened so far under your leadership,” Rood raved.

Education Commissioner Richard Corcoran continued, saying this was part of an “amazing run” as Commissioner.

Corcoran lauded DeSantis for many things, including the “largest expansion of school choice” in the history of the state.

“These are just transformational things … things that transform the hearts, the souls, and the minds of the next generation,” Corcoran said, invoking Hobbes and Locke and Abraham Lincoln in what were spirited remarks.

“We must continue to act with urgency in seeking innovative ways to improve the quality of education we provide students. As Florida continues to be a national leader in education, these historic investments will undoubtedly help us focus on the individual needs of students to help them grow academically,” Corcoran added.

The Governor scheduled his event at the same time as competing press conferences nearby from both U.S. Rep. Val Demings and Agriculture Commissioner Nikki Fried. The decision to tout budget proposals in Jacksonville was not announced until Tuesday night.

DeSantis has often employed Jacksonville as a backdrop for getting a more unvarnished message across than some other markets might get, but Tuesday was bland until the Q&A, a contrast to past show-ups.

In repeated visits to the city last year, he blasted the “drive-by smears” of the elite media that derided locals as “Florida morons” for going to the beach and catching some waves amid the pandemic.

And in a previous visit to this school, DeSantis blasted teachers’ unions for wanting more mitigation for the virus than he thought necessary.