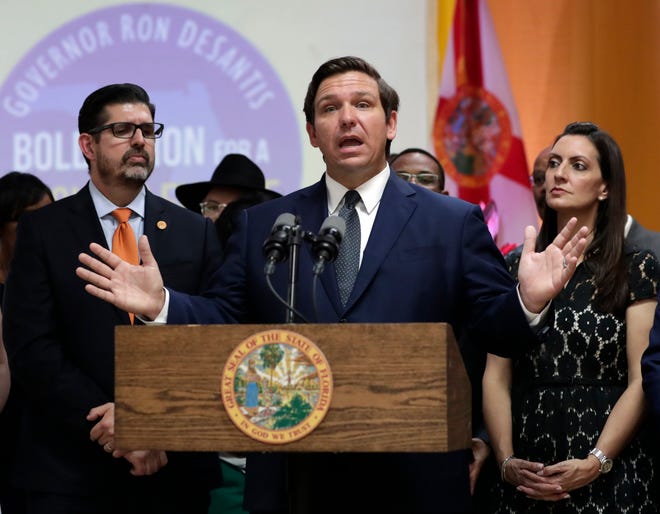 Barring the 'legal ping pong,' the order will never see the light of day, DeSantis says.

Florida is one of several Republican-led states that has sued the federal government over its COVID-19 vaccine and testing requirements. However, a federal court has put a temporary pause on the order while the issue makes its way through the legal system.

DeSantis told reporters in Jacksonville on Monday that he doesn’t believe the order, which mandates the vaccine or weekly testing requirements for workers in businesses with 100 or more employees, will ever see the light of day.

“I don’t think it’s ever going to apply,” DeSantis said. “I think the 6th Circuit is going to slam dunk this thing into the trash bin and it’s going to be done, so it’s never going to go into effect. And I think people should should be very confident that that’s the case.”

The ruling may go back and forth while it works its way through the “legal ping pong” of the courts, he continued.

“But at the end of the day, it’s not going to survive scrutiny before the full 11th Circuit or in front of the U.S. Supreme Court,” DeSantis said.

Along with the vaccine mandate, the Governor has made inflation a focal point of his criticism of Biden. Inflation has hit a 30-year high, with prices jumping 6.2% in the last 12 months.

Prices are rising because of the swift economic recovery, massive government spending and businesses struggling to hire workers to meet demand.

Firing people for failing to get vaccinated would only exacerbate the worker shortage, DeSantis says. Firing truckers would hit the shipping industry hard, which is one current bottleneck in the economy.

“With these truckers, had we not fought the Biden mandate and done what we’ve done in Florida, protect people, if you have just 1% of these guys that would get thrown out of (the) job, that would absolutely be devastating to our supply chain,” DeSantis said. “A lot of the problems we’re seeing would be exacerbated hugely. Left to their own devices, what Biden was trying to do would have absolutely crippled the supply chain further.”

The state’s lawsuit is just one angle officials have taken against the vaccine mandate. Last week, lawmakers passed and DeSantis signed legislation prohibiting businesses and governments from mandating vaccines for employees. That bill (HB 1B) also provided $5 million to the Florida Attorney General’s office to help fund the state’s legal challenge against the federal rules.