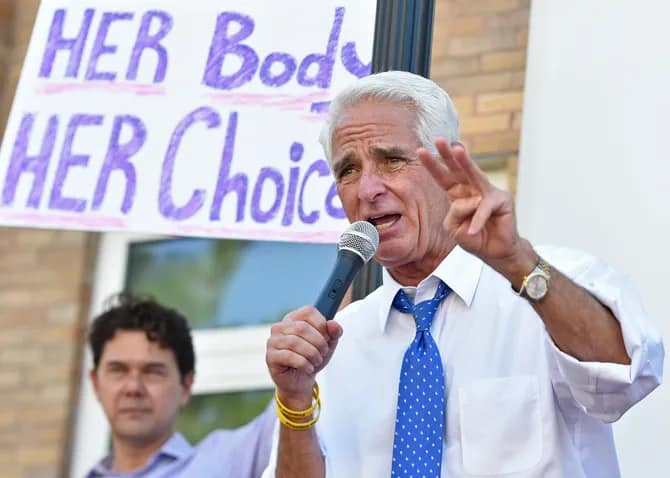 The former Republican is facing two women in the Democratic Primary for Governor.

The day after a U.S. Supreme Court hearing signaled abortion rights are about to be rolled back, Charlie Crist has a new coalition to prove his pro-woman, pro-abortion rights cred: “Women for Crist.”

Crist is running to become Florida’s next Governor, as a Democrat, and the current climate calls for a leader like him, according to this new group of women supporters, which includes his two sisters. They will be organizing and fundraising for  the Crist campaign.

To compete with Gov. Ron DeSantis next November, Crist must win in the Democratic Primary Election against two prominent women politicians. Agriculture Commissioner Nikki Fried is the only Democrat currently elected statewide, and Sen. Annette Taddeo of Miami was Crist’s running mate when he lost in his 2014 bid for Governor to now-U.S. Sen. Rick Scott.

“Women’s rights are human rights and the women of the Sunshine State deserve nothing less than to have their voices heard at every level of our government,” Crist said. “Folks with me today know what’s at stake and how serious we need to be (to be) able to get Gov. DeSantis out of office.”

Crist promises to veto any laws that would limit abortion access before about 24 weeks gestation, as has been the law of the land for past 48 years. Laws passed in Mississippi and Texas that further limit the time abortion is permissible are awaiting a U.S. Supreme Court ruling. And a decision in favor of those states would, in all likelihood, leave abortion access up to states to define.

And, in the case of some other governors, it’s not looking good for women, members of the coalition said.

“What’s going on in Texas? It’s just scary,” said Dr. Elizabeth Crist Poore, a radiation oncologist, who is also Crist’s sister. She was referring to the state’s “fetal heartbeat” abortion law that effectively ends all abortion in that state as it prohibits an abortion after a heartbeat is detected, a point before most women know they are pregnant. A similar law has been proposed in the Florida Legislature.

Poore recalled Texas Gov. Greg Abbott‘s response to a question about how Texas would protect rape victims who become pregnant as a result, since the law doesn’t include exceptions for rape or incest. Abbott said only that he “will work tirelessly to eliminate all rapists.”

“It’s terrifying the ignorance associated with that,” she said. “To think you have a grown, educated person make that naïve of a statement that’s so insulting to all those victims who have been attacked? We really need Charlie in there as our next Governor.”

Susan Bucher, who DeSantis suspended from her position as Supervisor of Elections in Palm Beach County, also hailed Crist’s position on COVID-19 protocols the current Governor has fought, and Crist’s support for directing more money toward child care and not toward guarding the southern border as DeSantis did.

“He proved to us that he can be a nonpartisan Governor who can focus on the people and not the politics — that’s what we need to come back to,” Bucher said, referencing Crist’s term as a Republican Governor. “I will promise you, Charlie, I will work as hard as I can to bring my county and the state of Florida back to prominence where we belong.”

Crist said it was impossible to adequately express how much the support means to him.

“You are the strength of this campaign,” he told the coalition of women.