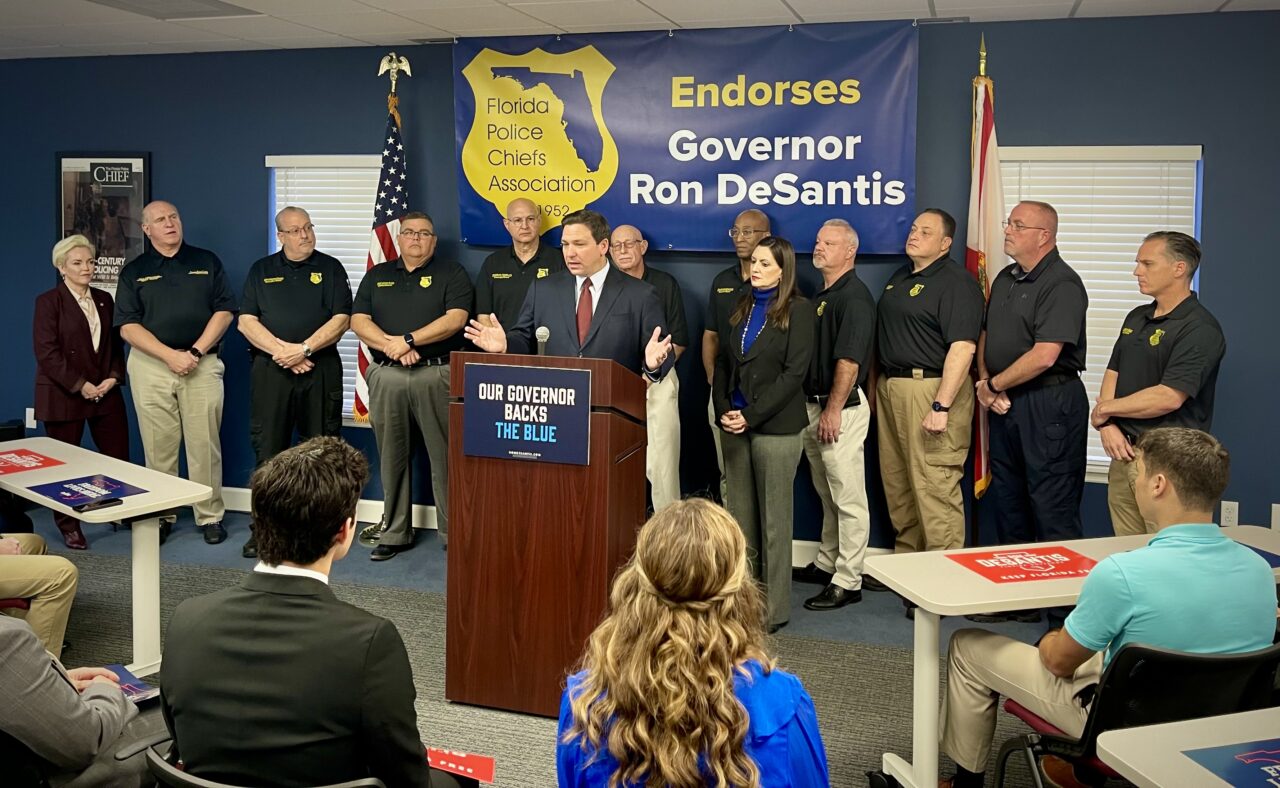 The association credited DeSantis with a 'zero-tolerance' approach toward violence against police.

The endorsement comes after a years-long effort by DeSantis to appeal to Florida’s law enforcement community.

Speaking alongside DeSantis and Lt. Gov. Jeanette Nuñez, FPCA President Stephan Dembinsky described DeSantis as an ally of cops with a proven record of prioritizing police.

He also credited DeSantis’ rollout of the anti-riot bill (HB 1), a proposal that created laws cracking down on rioters and violent demonstrators in Florida.

“Under this administration, violent and disorderly assembly, destroying property and harassing and threatening citizens is unacceptable,” Dembinsky told attendees. “Under his leadership, there is zero-tolerance for those who would attack the brave men and women who serve and safeguard our communities.”

The FPCA is the nation’s third-largest police chiefs’ association. News of the endorsement comes a day after 58 of Florida’s 67 sheriffs endorsed DeSantis.

DeSantis is pushing a slew of proposals that would jump-start law enforcement recruitment efforts in Florida.

Among other initiatives, the Republican Governor is asking lawmakers to bump the pay of state law enforcement officers, provide another round of bonuses to current cops and cover training expenses for cops who transfer into Florida from elsewhere.

DeSantis touted the proposal as the “best law enforcement package” in the nation. The bill also would provide police academy scholarships to new candidates.

“We’re gonna make sure that we’re doing what we need to do to keep our community safe… When you have crime running rampant in these places, the entire quality of life goes down the toilet,” DeSantis said of cities that do not support police.

A potential GOP presidential contender, DeSantis has garnered national media attention by fashioning Florida as a state where law and order reigns supreme.

At the event, he lambasted cities that do not support cops and those that slash police budgets.

He blasted local leaders and prosecutors in San Francisco, who he says have fostered a “culture of lawlessness.”

“America’s streets in some cases have been ravaged with crime, communities have been decimated… We will not stand for that because we stand firm on the side of law and order,” Nuñez said.