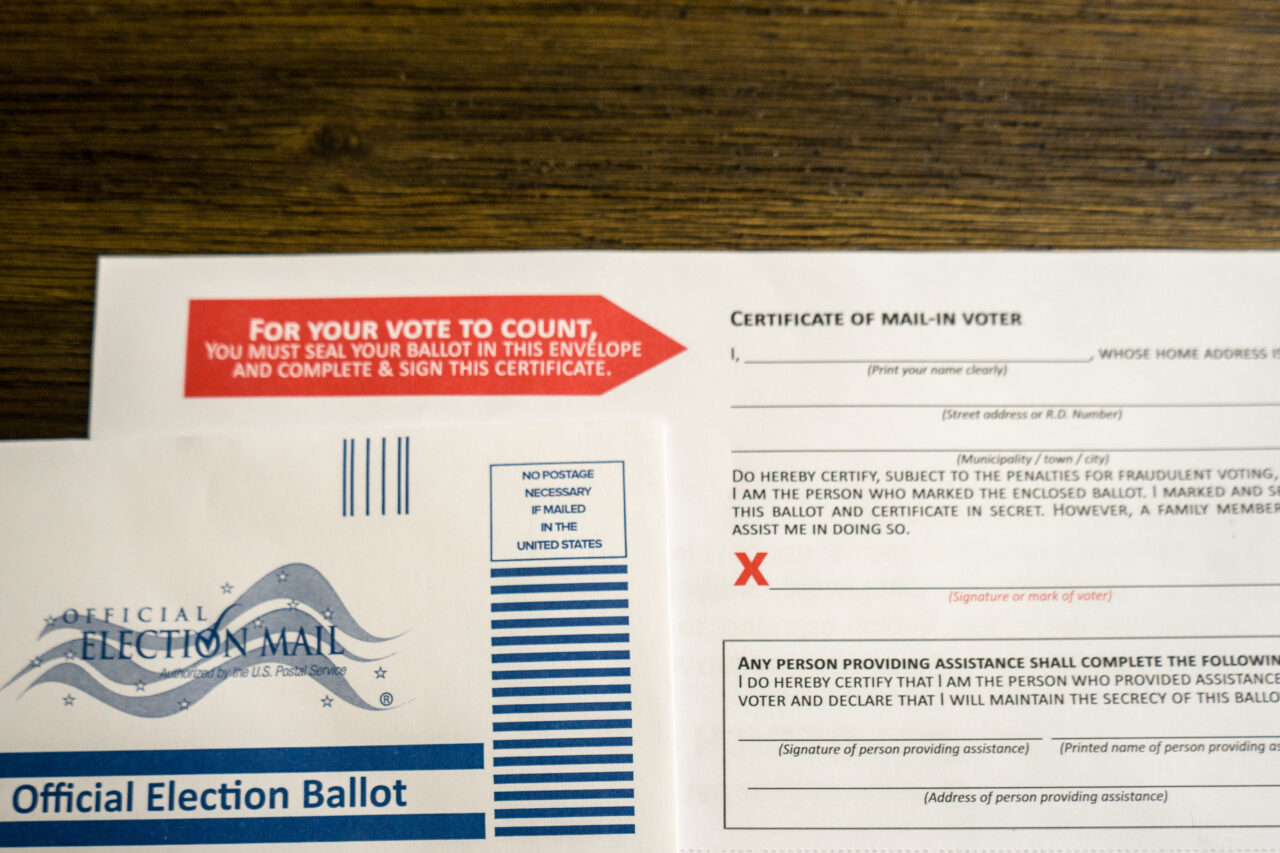 'We didn’t know because we are old.'

Signatures of some voters in apartment buildings and high-rise towers in South Florida whose registration was changed to Republican appeared noticeably different from paperwork those same voters signed earlier, according to a new review of voting records.

The signature comparisons, performed this week in Miami as journalists from the University of Florida College of Journalism and Communications investigated possible voter registration fraud, found that some past and present signatures showed obvious differences in the size of letters, strokes and flourishes of individual elements of names.

The review focused on paperwork for a small sample of a dozen voters who said in interviews that their party affiliation was changed to Republican despite never submitting the changes themselves, not approving anyone else to do so, or not realizing it was done.

The differing signatures add to mounting circumstantial evidence of shady political tricks in South Florida, suggesting that unidentified canvassers during the weeks around Thanksgiving may have changed the party affiliation without permission of mostly elderly, Hispanic voters living in public housing in the area to make them Republicans.

Interviews with scores of area voters and a new analysis of voter data — also performed by UF’s journalism school — showed the suspicious activity extended to at least 20 more high-density, residential buildings over a five-mile area — beyond just the twin Haley Sofge Towers public housing complex that has been the focus of media and investigators in recent weeks.

The analysis showed voters in nearly two dozen buildings in a six-mile radius had their party registration changed to Republican at rates more than 10 times the statewide average during the past year. Among party-switchers, only 4% of those buildings’ residents changed their party affiliation to the Democratic Party.

The buildings are located in Hialeah in the Little Havana and Allapattah neighborhoods west of downtown Miami and east of Miami International Airport. Their dense populations would have appealed to canvassers attempting to visit as many voters as possible and as efficiently as possible. Most of those living in the apartments and high-rises were Hispanic, elderly residents. Most of the buildings are public housing for lower-income residents.

Handwritten registration forms for some of those affected voters — obtained this week under Florida’s public records law but with the signatures blacked out — showed handwriting that did not appear similar to paperwork previously submitted by the same voters.

Under Florida law, election officials are barred from releasing copies of voters’ signatures — but they can be inspected in person, by appointment, under supervision in the Miami-Dade County Elections Department. That happened this week. Election officials displayed signatures side by side on a large video screen. No photographs of the signatures were permitted.

In many cases, the handwriting in fields for address, phone numbers and other details appeared to match those on other registration forms submitted during the period, indicating at least two people with distinctive writing styles may have been involved in many of the changes. Comparing signatures on those forms wasn’t possible until a reporter was permitted to view them in the election department’s offices.

The newly obtained paperwork also indicated most of the party-switching occurred over a few weeks around Thanksgiving. The documents showed one change as early as the summer but most between October through mid-December. One especially popular window for the registration changes appeared to be Nov. 11 — Veterans Day, a national holiday, when many voters would have been in their homes.

In the signature-matching review, some signatures last year or earlier this year appeared to be close or nearly identical to those on records filed with the Miami-Dade Election Department in 2019, 2018, or earlier. That could mean voters who protested they were victims signed forms without paying close attention, were tricked into signing partially completed forms, were confused, or forgot what they had signed.

But in about half the cases, signatures appeared much different. For example, the signature for Tomas G. Munoz Izquierdo, 72, of Hialeah was significantly different. It was written on a different slant, and some letters were shaped noticeably differently.

It’s possible for the signatures of adults to change over time. Among handwriting experts, known as forensic document examiners, so-called signature kinematics — especially vertical stroke duration, amplitude and velocity — are known to be affected by advanced age, especially among men.

Because signatures can evolve, the election department in Miami-Dade does not attempt to verify or authenticate signatures on registration forms when voters update their home address, for example, or change their political affiliation, said Roberto Rodriguez, the department’s assistant deputy supervisor of elections, government affairs and media relations. He said the department confirms a voter has supplied the correct Social Security number or driver’s license.

In an interview, Isis Rodriguez, 66, of Hialeah, said she was shocked when a reporter told her she was a newly registered Republican as of Nov. 3. She said she was approached twice by women discussing voter registrations, but Rodriguez said she gave them no personal information and no permission to update her records.

“Look, it says Republican,” she said in Spanish as she held her voter registration card.

Her neighbor, Milagros Llanes, 68, said she had been a Democrat since becoming a U.S. citizen. She also was surprised that her records were changed on July 23 to show her as a Republican. She remembered people knocking on her door to discuss voting and indicating they knew her name and home address. She said others visited her as recently as earlier this month.

Caridad Fundora, 83, of Hialeah, said two women asked for her voter registration card and said they would send a new one in the mail. The new card showed her as a Republican, even though she never asked to change parties.

About 15 minutes north, Barbara Roche, 72, of Opa-locka, said her party affiliation was changed without permission. Records show this was done on Oct. 23. Her signature was distinctive and appeared identical on paperwork she had signed previously. Roche lives at a residence owned by Catholic Health Services, a ministry of the Archdiocese of Miami that provides health care, affordable senior living and home health services.

“We didn’t know because we are old,” Roche said. “If we hadn’t seen the news about it, we wouldn’t have even known. I don’t know what’s happening with this country.”

Of the 742 voters in the 23 buildings who changed their party affiliation during 2021, 92% were newly registered Republicans at the end of the year. Statewide, the Republican Party grew by 1.1% last year. Numbers of registered Democrats overall fell by 1.2% — most of those voters declared themselves not affiliated with any party.

In a city-owned, 72-unit apartment complex for the elderly known as Villa Alegria in Hialeah, 30 of the complex’s 90 total voters changed their affiliation last year. Fully 29 became newly registered Republicans; one switched to become a Democrat.

Changing a voter’s party affiliation would not affect their ability to cast a ballot in Special and General Elections, and a demonstrated ability to engage in registration fraud does not translate to being able to alter ballots or election results. But Florida remains a closed-primary state, so Republicans can’t vote in Democratic Primaries, and vice versa.

Some voters who said they were victimized said they remembered at least two sets of volunteers circulating in their buildings: Two young women working together, plus an older couple. They could not be identified.

Democrats in Florida have seized on the issue since the earliest news reports on Feb. 2 highlighting anomalies at the Sofge Towers. In Nov., the Party was stung last year when registered Republicans officially outnumbered registered Democrats for the first time in state history. GOP Gov. Ron DeSantis announced the development on Nov. 5 — even as the registration paperwork in South Florida indicated efforts there were continuing.

Last week, the Miami Herald reported the remarkable numbers of residents in the twin Haley Sofge Towers and one nearby building whose registration changed to Republican over the previous three months. It also found clusters of people in roughly 75 buildings where at least five people had their registration changed over the same period, saying 90% of them became Republicans.

Nationally, Democrats looking ahead to November’s elections — including DeSantis’ re-election race — have expressed doubts over the Party’s track record in Florida. President Donald Trump carried Florida in 2016 and 2020, and Republicans have realized gains in the statehouse and in Congress. In Florida, the GOP controls the Governor’s mansion, both houses in the Legislature, U.S. Senate seats and 17 of 27 congressional seats.

Democrats have called for state and federal criminal investigations into the suspicious voter registrations in South Florida.

State Sen. Annette Taddeo, a Miami Democrat running for the Democratic nomination for Governor, said a woman in Hillsborough County (she did not identify) told her campaign workers could earn bonuses for registering voters as Republicans.

“They wanted this so that those donors and those investors in Democratic campaigns walk away from Florida, which is exactly what many of them did,” Taddeo said.

In a statement, the Republican Party of Florida said it lawfully conducts its voter registration drives. It also has said it will begin presenting voters with a disclaimer in Spanish and English to acknowledge they are aware they would be changing their party affiliation. It identified its registration vendor as September Group LLC, which did not respond to a reporter’s inquiries by email or phone Friday.

DeSantis said any illicit party changes should be investigated, and a recent case involving the Governor himself demonstrated his tough-on-the-issue stance.

The Governor’s home address on his voter registration records was illegally changed in 2020 by a 20-year-old man in Naples who said he did it to show weaknesses in the state election system.

In that case, DeSantis rejected a plea agreement to have the criminal charges dropped against Anthony Steven Guevara, who pleaded no contest to two felony charges and remains on probation until June. 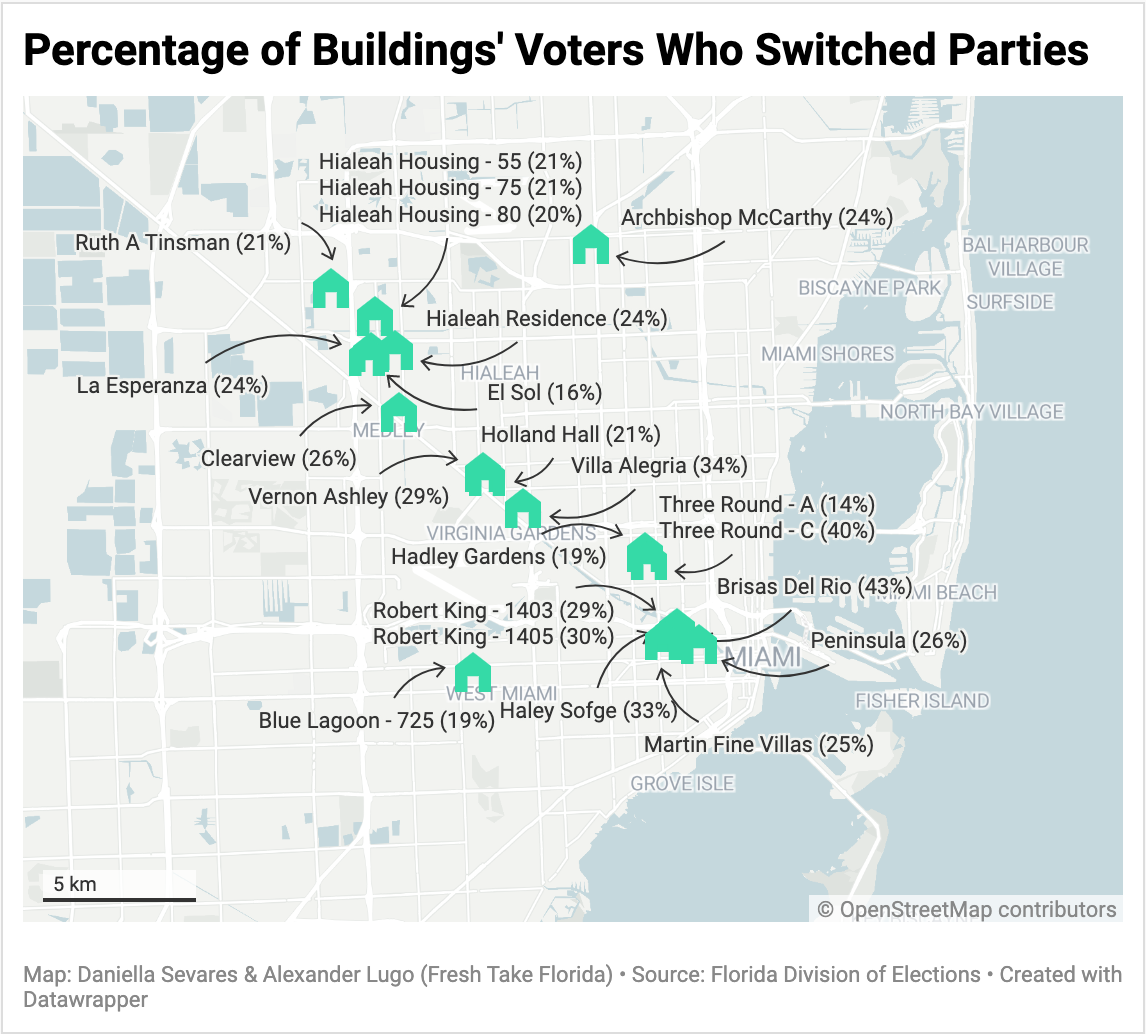 Alexander Lugo and Daniella Sevares reporting; produced by Fresh Take Florida, a news service of the University of Florida College of Journalism and Communications. The reporters can be reached at [email protected] and [email protected].