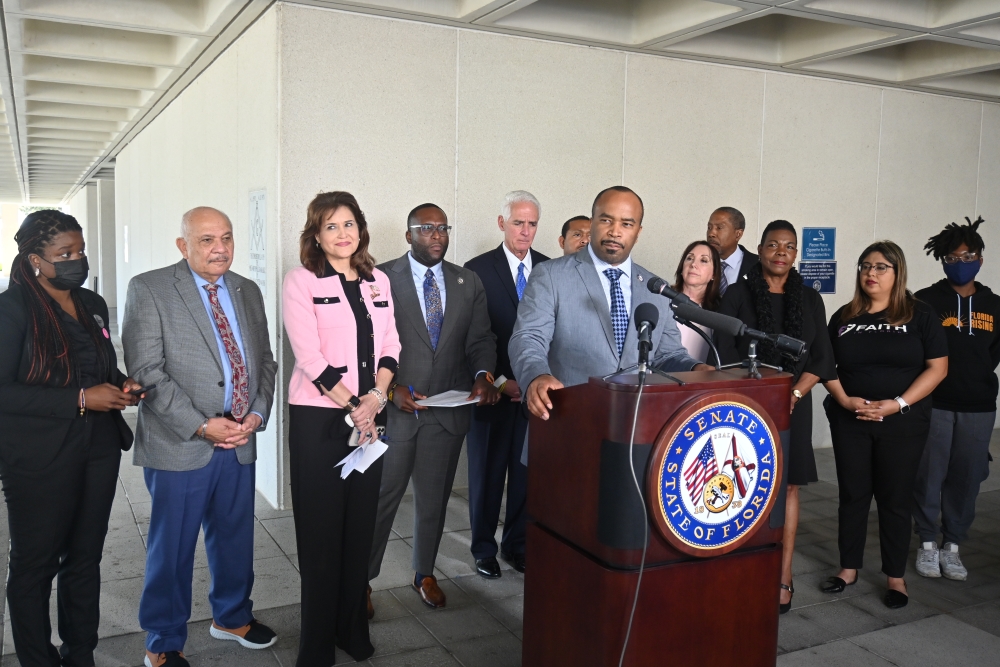 'He is more concerned about Iowa voters than he is about the people of Florida.'

Powell criticized DeSantis’ characterization that Florida is the freest state in the country following the progression of HB 7 and HB 1557, which he said will limit how racism and sexuality are discussed in schools.

“Who does the freedom extend to? Neo-Nazis? Proud Boys?” Powell asked. “Does it extend to those who feel free to use racial slurs, but reject protests for equality? That seek to muzzle discussions related to a child developing sexuality, the teaching of Florida’s rich racial history or the voters’ right to choose the person of their choice to represent them? Who is this freedom for?”

Taddeo also questioned the freedom narrative amid HB 5, a bill that would ban abortions after 15 weeks, making it through the Legislature.

“Our government, just like communist China and other communist countries, are going to make decisions for us — for women — including women who are raped, who have gone through incest,” Taddeo said. “I am very disappointed these Tallahassee Republicans, that actually call themselves conservatives with a straight face, are passing bills that pretend like it’s the government’s job to protect their fragile little souls from feeling bad if they learn about slavery, or any of the not-so-pleasant history of our state.”

Jones argued the legislation is going through with DeSantis’ support because he is appealing to the base and ignoring what Floridians actually need. He also took aim at DeSantis for his use of the phrase “monkey this up” on the 2018 campaign trail and for defending podcast host Joe Rogan’s frequent use of the N-word earlier this month.

“DeSantis has, with seemingly no hesitation, used African Americans as scapegoats in his quest to become the next standard-bearer for Trumpism,” Jones said. “Gov. DeSantis would rather engage in a culture war, rather than the war to fight poverty in our communities.”

To start her remarks, Eskamani quoted a Nayyirah Waheed poem that reads, “Never trust anyone who says they do not see color. This means to them, you are invisible.”

“I have to tell you that many times this legislative process, I feel invisible, especially as a young woman of color. But today, I feel seen. Today, I feel heard,” Eskamani said.

She said bills like HB 7 and HB 1557 are going forward to keep some people from feeling uncomfortable, something she does not think should drive legislation.

“I operate in a chamber that is surrounded by photos of every past Speaker, and all of them are men, and only two are men of color. That’s a little uncomfortable for me,” she said. “But guess what? I don’t complain about it. We try to solve those problems to ensure that equity and freedom is something that every person has access to, not something we try to take away.”

Crist said the legislation being passed is sending Florida backward on the path to progress.

He said the legislation is meant to be red meat for DeSantis’ Republican base to help him gear up for a 2024 presidential run.

“He’s forgotten us. He is more concerned about Iowa voters than he is about the people of Florida,” Crist said.