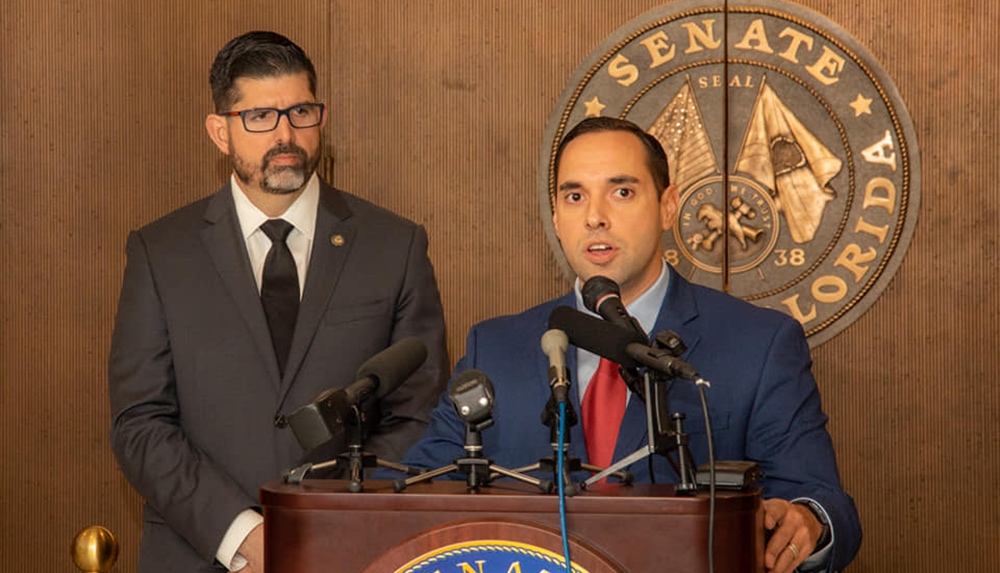 The proposal again drew a deluge of criticism from the public and Democrats, who uniformly voted against it in the House Education and Employment Committee. But despite their objection, there remained more than enough GOP votes to take the legislation (HB 7) across the finish line.

Its sponsor, Rep. Bryan Ávila of Miami Springs, acknowledged the bill “brings out a lot of passion” but insisted its aim was not to discriminate.

“I know some (House) members and some of those in public testimony mentioned that it covers up or washes away history. That is not the case, far from it,” he said. “This is … to make sure our children and residents are earning and learning in a positive environment.”

Ávila’s measure, dubbed an “Individual Freedom” bill, is among the most controversial proposals of the 2022 Legislative Session. It seeks to ban required discussions and lessons in classrooms and workplaces of subjects Republicans contend are meant to indoctrinate cultural guilt in students and employees.

The enforcers of those rules, if the bill becomes law, would be parents and employees. Ávila said parents could first approach teachers to resolve concerns. If unaddressed, those issues could then go up the chain to administrative officials and, ultimately, the Department of Education and the courts. Employees would be able to seek similar resolutions.

Asked to specify which school districts in Florida have taught material objectionable enough to merit such action, Ávila pointed to several books on White supremacy that have since been removed from a Broward County Public Schools website and Palm Beach County, whose School Board in May narrowly voted to remove a “White advantage” line in its equity statement.

In the professional workspace, he said, it would outlaw training programs like one at American Express teaching employees that capitalism is fundamentally racist, another by Coca-Cola asking staff to be “less White,” and another by CVS forcing hourly workers to “understand their privilege,” among other examples.

The bill wouldn’t ban teaching of history, provided those history lessons are part of an approved curriculum and did not include a teacher injecting his or her subjective perspectives into the classroom discussion, Ávila said.

“Nothing in this bill bans the teaching of historical facts about slavery, sexism, racial oppression, racial segregation and racial discrimination,” he said. “We would and should be outraged if those important lessons were not taking place in our classrooms.”

HB 7 and its Senate analogue by Sen. Manny Diaz Jr. (SB 148), which has one more committee to pass through before heading to the floor, are interpretations of anti-woke education and business proposals Gov. Ron DeSantis pitched last fall targeting critical race theory.

According to its proponents, HB 7 expands objective civil rights protections by keeping them from being distorted by subjective movements. They insist it will have no effect on approved classroom curricula that center on discrimination, including slavery, the Civil War, the Holocaust and Japanese internment during World War II, among other subjects.

Democrats have also suggested it would be a bonanza for litigation, an assertion Ávila hasn’t disputed.

But opponents suggest the bill’s true goal is to stifle potentially difficult but ultimately necessary classroom and workspace conversation of race, gender identity and privilege just so that groups who have enjoyed systemic privilege, namely White men, don’t have to feel uncomfortable.

In prior committees, the bill drew sharp rebukes from Democrats who characterized it as a hypocritical infringement on speech, expression and the proper, comprehensive teaching of history.

“I’m disgusted. I’m disappointed I have to walk these halls with you,” Pompano Beach Democratic Rep. Patricia Williams said. “Why should I not want my children to hear about the history and the struggle that my ancestors went through?”

Kristen Arrington, a Democratic Representative from Kissimmee, noted the bill conflicts with past GOP legislation like HB 233, which passed last year and protects “viewpoint diversity” at state colleges and universities.

“I don’t understand how you can make a person feel guilt or anguish,” she said. “These history lessons we’re looking at censoring actually help our students to experience empathy and understanding, which are very different from guilt. Guilt is usually experienced when someone does something themselves that they feel is wrong, not another person’s actions.”

Nearly all attendees from the public opposed the bill.

Civics teacher Myndee Washington argued history should evoke emotions, not all of them positive.

The few residents who spoke in favor of the bill said it would safeguard students from harmful ideas and people.

“These ideologies teach that our group identity is what determines our destiny,” he said. “This is not history, (and) we are not carbon copies of our group stereotype.”

Barney Bishop III, the founder and chair of Citizens for Responsible Spending, said the “indoctrination that’s being done at schools” is among the reasons why many parents are removing their students from public schools and placing them in charter schools.

“Drag queens in elementary schools are not appropriate,” he said to a chorus of groans.

Orlando Democratic Rep. Travaris McCurdy called HB 7 the one of many in a series of measures meant to suppress minority voices, including bills banning certain protests, barring transgender athletes from playing school sports and another so-called “Don’t Say Gay” bill advancing through the Legislature.

“This is red meat,” he said. “As a Black man in this process, who happens to be elected to a body that frankly makes me feel uncomfortable sometimes, it’s an attempt to put the quote-unquote woke community back to sleep,” he said. “Privilege does exist. Racism does exist, (and) you’ve got to stop doing the Governor’s bidding, y’all. He can run his own campaign, but we as a body shouldn’t be doing his work.”

It sounds like people are debating different bills, said Brevard County Republican Rep. Randy Fine, who in 2020 successfully sponsored a bill requiring the Department of Education to give schools curriculum standards for teaching lessons about the Holocaust.

Ávila’s bill, he said, explicitly says teachers and companies can’t teach students or employees, or compel them to believe through required lessons or training, that:

— An individual, by virtue of his or her race, color, sex or national origin, is inherently racist, sexist or oppressive, whether consciously or unconsciously.

— An individual’s moral character or status as either privileged or oppressed is necessarily determined by his or her race, color, sex or national origin.

— An individual, by virtue of his or her race, color, sex or national origin, should be discriminated against or receive adverse treatment to achieve diversity, equity or inclusion.

— An individual should feel discomfort, guilt, anguish or any other form of psychological distress on account of his or her race, color, sex or national origin.

Fine said he has challenged people opposing the bill to name one or more of the those things they would be OK with seeing taught in schools or at work. He said he’s yet to get an answer.

“When you emphasize ideology, you crowd out history,” he said. “My son goes to social studies for 45 minutes every day, and I want him to learn about … our history. He doesn’t have to feel bad about it. He didn’t cause it. He had nothing to do with it. But he should know about it.”

HB 7 now heads to the House floor for further amendment and a final vote.