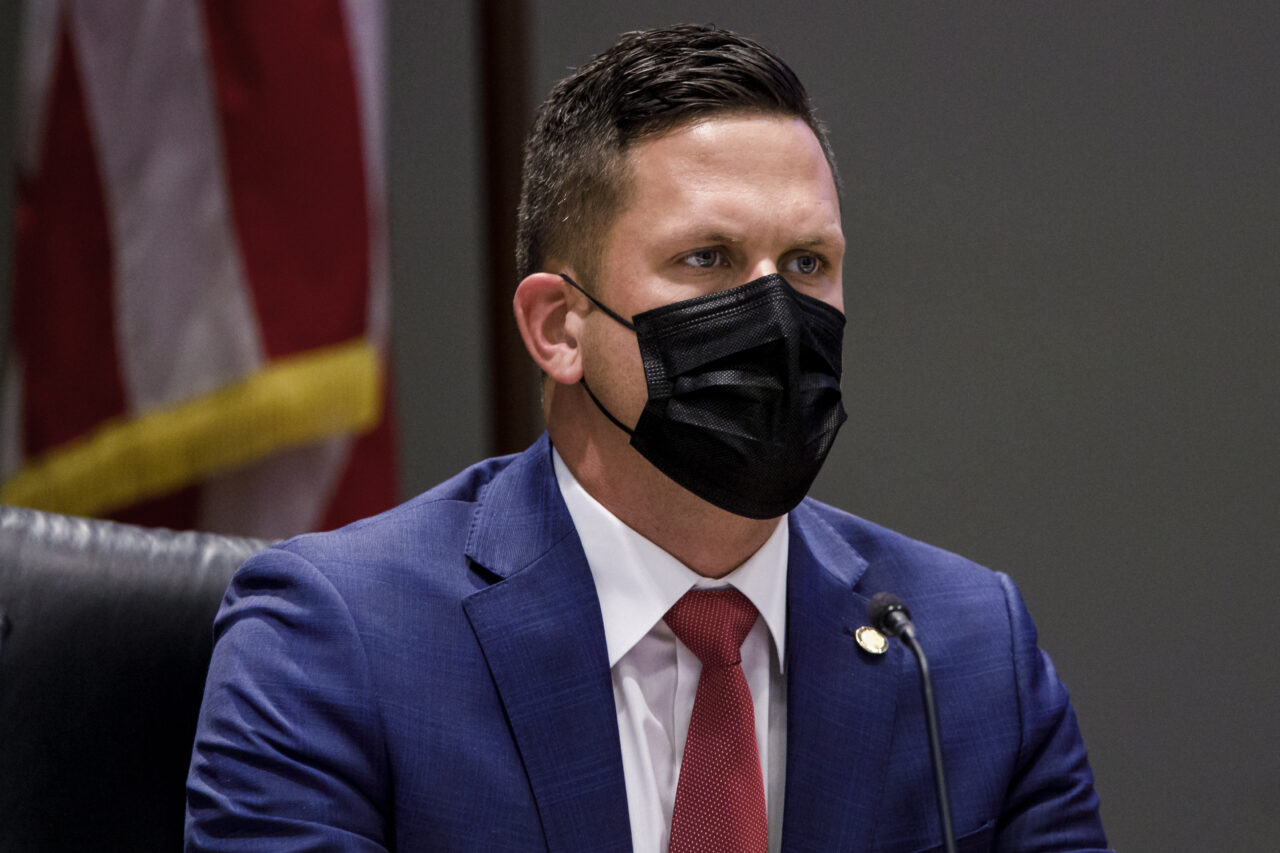 'This bill is unnecessary. No one is teaching your child to be gay.'

The legislation would ban classroom “instruction on sexual orientation or gender identity” for students in kindergarten through third grade, or “in a manner that is not age-appropriate or developmentally appropriate for students in accordance with state standards” for other students.

Parents who think a classroom discussion is not age-appropriate or who are unsupportive of a district’s policies would be able to sue for damages and attorney’s fees.

“I can’t not make it personal,” Smith, an openly-gay Orange County Democrat. “This bill goes way beyond the text on the page. It sends a terrible message to our youth, that there is something so wrong, so inappropriate, so dangerous about this topic that we have to censor it from classroom instruction.”

When discussing the legislation, Smith referenced HB 7, the anti-‘woke’ bill, which the House passed just before hearing the LGBTQ instruction bill.

“I feel like there’s a theme here because we’re passing legislation to censor our workplaces, our schools, our teachers. But I can tell you right now, you’re not gonna censor me,” he said, adding that the bill’s vague language will “create an environment of fear and censorship,” even if it does not directly restrict conversations.

Republicans pushed back against opponents nicknaming the legislation the “Don’t Say Gay” bill and argued the bill only restricts instruction among children aged five to nine, despite the language of the bill suggesting otherwise.

“Critics are claiming that we’re banning discussion about families in schools, that we’re banning the teaching of history, that we’re outing students. Members, this is all fiction,” said Rep. Kaylee Tuck, a Lake Placid Republican. “The bill plain as day states that we cannot have instruction, meaning curriculum led by teachers, teaching children ages five through nine about sexual orientation and gender identity — think about children that are learning how to color inside the lines.”

While the bill names grade levels, the legislation does not restrict the topics from being barred across all ages if the school district deems the instruction age-inappropriate, pointed out by Rep. Mike Grieco, a Miami-Dade Democrat.

“This bill in its language empowers school districts throughout this state to eliminate any discussion or recognition of the LGBTQ community until high school graduation. This is not about kindergarten through third,” Grieco said. “Anyone who says that this bill is only about kindergarten through third grade is either mistaken or they’re flat out lying.”

Republicans lauded the provisions as a necessity for parental rights, citing concerns that children were being indoctrinated with “radical leftist gender theory.”

“Six- to nine-year-olds should not be taught gender identity or sexual orientation at that age. It’s that simple,” said Miami-Dade Republican Rep. Juan Alfonso Fernandez-Barquin. “This is happening. We have children as young as six years old being taught the radical leftist gender theory and that is frightening.”

Fernandez-Barquin went on to argue the legislation was necessary to prevent Florida from adopting policies like those in California or Canada, referred to by the legislator as “our totalitarian neighbor to the north.”

“They are terminating parental rights, because parents refuse to affirm a child’s gender orientation, and I’m sure that’s what the opponents would like. But the parents know what’s best for the child,” he said. “Just like a parent would not take an anorexic child to go get liposuction — a parent knows what’s best.”

“In that support plan, the schools are affirmatively — affirmatively — excluding the parents. They are making life-changing decisions for children without the involvement of the parent,” she said. “Our schools are systematically interfering with the parent-child relationship. And if this form was in schools about transitioning a child from one religion to another, you better believe everybody in this room would be upset. What if that was happening in our schools?”

The form Grall referenced advises educators to not out a student to parents if they have expressed they are LGBTQ or questioning their sexuality or gender. There is an ongoing lawsuit against the Leon County School District filed by parents of a teenager who confided their identity with school officials, who developed a gender-conforming plan for the student.

Democrats continued to push back, arguing the legislation is not only unnecessary, but harmful to the LGBTQ community.

“This bill is unnecessary. No one is teaching your child to be gay. There is no sexual discussion in K through three. As a matter of fact, parents in the state of Florida have a right to opt out of the sex-ed curriculum. This is a mean bill,” said Rep. Robin Bartleman, a Weston Democrat. “This bill segregates one section of our community, the section that is most in need — highest suicide rate, highest homelessness rate, highest rates of violence and bullying.”

The vague language of the bill, and its enforcement through litigation, also drew passion from Democrats.

“We are in distress because this bill is yet another attack on our community,” Smith said, turning his debate to address members of the LGBTQ community. “We will wake up every single day to fight for you because you are worth fighting for.”

St. Petersburg Democratic Rep. Michele Rayner, who is the first openly gay woman of color to serve in the Florida Legislature, also addressed LGBTQ youth in her statements.

“I walk into a building every day where I am told that I do not matter,” Rayner said. “I can not only surmise that it’s because you don’t care — that gay folks, and LGBT folks and trans folks don’t matter. So I’m here to tell the LGBTQ babies who are watching: You matter. I see you. You are loved. You are perfect just the way you are.”

The Democrats also pointed to the fact that student pages were removed from the chamber during the debate.

“Where are the pages? Pages are in middle school, and they’re not on the floor right now — this should be a discussion they should be listening to. We shouldn’t be hiding them somewhere else in the building,” Grieco said.

In closing the legislation, Harding said that the bill is about boundaries, not hate.

“One thing I do know is that every member in this chamber that has spoken today, that has spoken in committee, we care a lot about our kids,” he said. “Let’s talk about what we’re doing, what the words on the page do.”

The legislation has been the subject of controversy, drawing public criticism from physicians, members of the LGBTQ community, LGBTQ advocacy organizations, the Florida PTA and ACLU Florida at committee hearings. Proponents of the bill have included Florida Citizens Alliance, Christian Family Coalition and the Florida Family Rights Council.

After it cleared the House Thursday, the Florida Education Association released a statement, calling legislators who supported the bill “misguided,” and saying they have “chosen to compromise the quality of students’ education,” as well as further the staffing crisis.

“Educators love their students. We all want to make sure that every child can grow and thrive, regardless of race, background, ZIP code or ability,” said Florida Education Association President Andrew Spar in a statement about HB 1557 and HB 7. “These bills mean some of our students will no longer feel safe and secure, or even seen, based on who they are. Both bills promote discrimination and censorship, and send the clearly un-American message to students that individuality is not valued, that everyone must conform to a single point of view.”

The version approved by the House Thursday varied slightly from its Senate counterpart, seemingly attempting to address previous criticisms of vague language.

Harding was able to clear another amendment Tuesday, however, that would provide another process for parents to work out issues with the school before pursuing legal action. If a concern is not resolved by the school district, the amendment would allow the Department of Education to appoint a special magistrate to resolve the dispute via the request of the parent. The parent also could choose to pursue a lawsuit.

Harding withdrew a controversial amendment he tacked on the bill last Friday before its first hearing on Tuesday.

The bill, without the amendment, allows schools to not disclose information to parents about a child’s “mental, emotional, or physical health or well-being” if that information “would result in abuse, abandonment, or neglect.” Harding’s amendment, however, would have required schools to inform parents within six weeks about such a decision to “withhold such information.”

Democratic lawmakers immediately pushed back on the amendment, arguing that it would require school staff to “out” students to their parents.

The amendment received so much criticism that Harding made clear when presenting the bill that it would not out LGBTQ students.