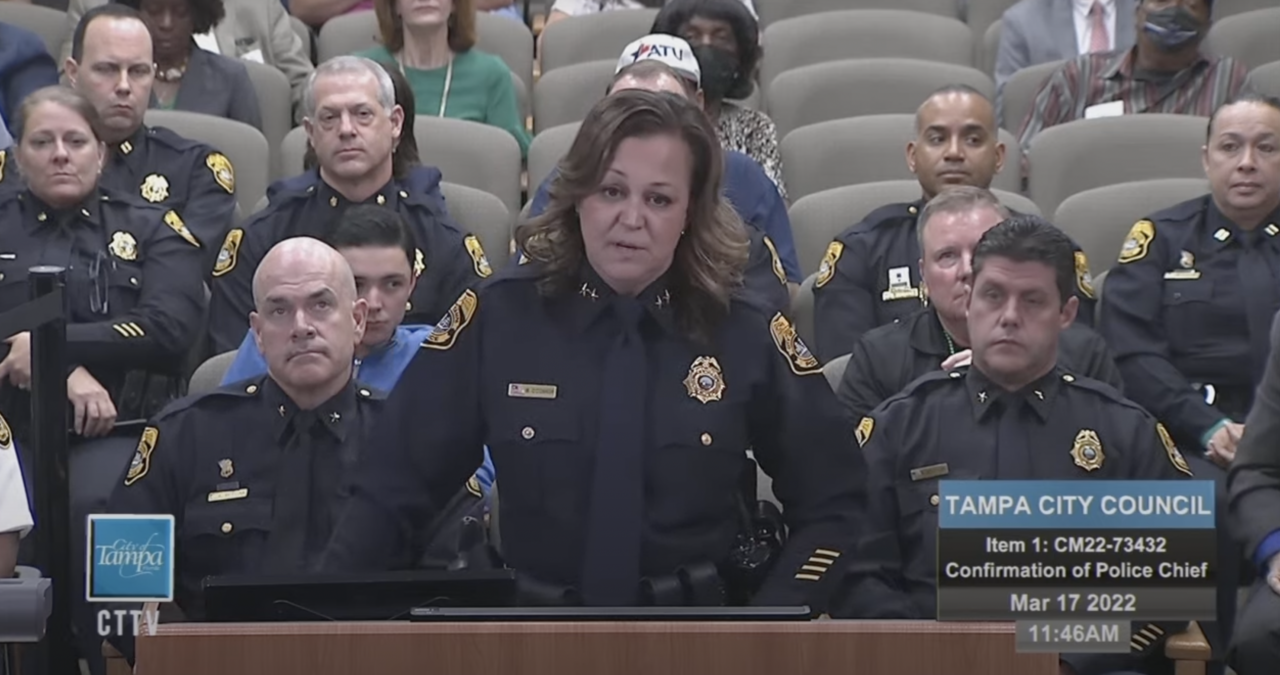 Council members approved the controversial choice in a split vote.

The Tampa City Council Thursday held its long-awaited vote to confirm Mary O’Connor as Chief of the Tampa Police Department (TPD) following more than a month of controversy and a PR campaign to win over a reluctant public.

“The best police department in America will be even better under the leadership of Mary O’Connor,” Mayor Jane Castor said. “I appreciate the City Council’s confirmation.”

But it wasn’t the unanimous decision the administration would’ve liked to see.

Members voted 4-2 to confirm Castor’s choice, but with caveats. All but one of the six Council members had concerns with a lack of transparency in the selection process or the Chief’s checkered past. Council member Bill Carlson and Chair Orlando Gudes voted “no.”

As a young officer, O’Connor was arrested and charged with battery on a law enforcement officer during a DUI traffic stop where she was not the driver. Her future husband, another TPD officer at the time, was. Adjudication of her guilt in the felony charge was withheld so long as she wrote a letter of apology. Both officers were fired, later hired back, and rose to the highest ranks of the department.

O’Connor retired in 2016 and spent the last five years working as a consultant and trainer, traveling to law enforcement agencies around the country. She’s also a senior faculty member at the FBI’s premier leadership officer development program.

Dozens of speakers filled City Hall in its first meeting welcoming the public back to Council chambers. Most were retired Tampa Police officers who’d worked with O’Connor or relatives of law enforcement. And Robin Lockett of Florida Rising pointed out the first few rows of the Council chambers were filled with uniformed members of the Tampa Police Department out in force to back their Chief.

“I have heard about the incident in 1995, 28 years ago, between a 25-year-old young woman who had a momentary lapse in judgment, but has since led an exemplary life as a law enforcement officer, a wife and a mother,” said Simon Ganassi, father of a Tampa firefighter. “I judge people by the totality of their merits, not by an isolated incident.”

But many members of the public, especially those from minority and marginalized communities, pointed to a double standard surrounding who gets a second chance.

“Why is it some people can overcome their mistake but the people in my neighborhood, East Tampa, they get beat down for their mistake?” Valerie Bullock asked.

Hillsborough County NAACP president Yvette Lewis pointed out that O’Connor was a leader in the department during the period when its “biking while Black” and crime-free housing programs disproportionately impacted minority communities.

“She stated that she treated everybody with dignity and respect, but yet African Americans in this community were targeted with ticketing and arrest for riding a bike under Mary O’Connor’s leadership,” she said. “The wounds are still there. The wounds are still present.”

One East Tampa resident who rose to speak in favor of O’Connor made it a point to say she wasn’t coerced to be there.

“I am a grown woman,” Karen Peoples said. “No one forced me to come here.”

That’s because the last time she spoke in support of TPD, she was seen being escorted to City Hall by TPD officers. And she wasn’t alone. As the City Council took up the controversial crime-free housing program, reports surfaced of TPD vehicles picking people up and driving them to the meeting in order to sway Council members.

Council Member Guido Maniscalco also wondered if an arrest like O’Connor’s would allow him to serve. He recounted a story of being pulled over after running a red light after being the designated driver for some friends. He was released, but said he didn’t think he would’ve made it to the City Council had he been arrested that night. He also said the city didn’t allow him to hire someone as a legislative aide because they had a DUI arrest without a conviction.

Despite his trepidation, Maniscalco said he voted to confirm for the benefit of progress in the city.

Carlson said it was.

Many on the City Council and in the community complained about a lack of community engagement and transparency in the process. Some Council members said they were in the dark nearly every step of the way. Most found out about O’Connor’s selection after it had happened.

Gudes, himself a former member of TPD, said he was shocked at the lack of Black officers standing to support O’Connor. He said he witnessed in his own service how others were not afforded the same opportunity for a second chance she received.

“Look at Sam Jones,” Gudes said. “He could never make major. He was one of the most disciplined Black officers in the police department and never could get an opportunity to get to the top because other powers told different chiefs, ‘You can’t make that guy because of his record.'”

O’Connor has been performing the duties of police chief since her appointment in February. As chief, she said she will focus on working with community partners; ensuring mental health and wellness of officers; reducing crime; and ensuring everyone is treated with dignity and respect.

nextIleana Garcia apologizes after suggesting 'gay is not a permanent thing'