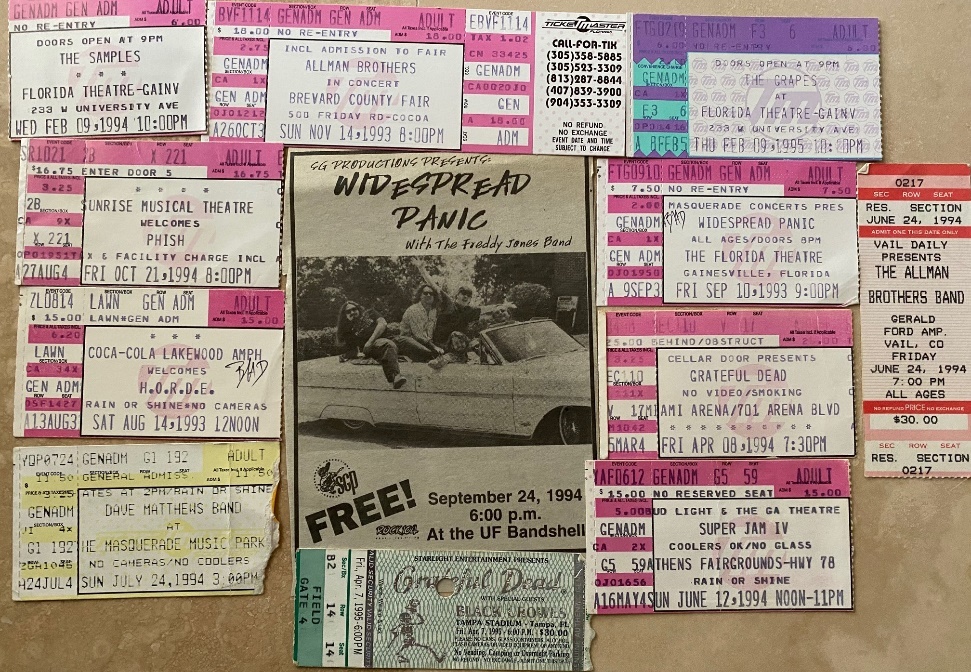 These times, shows, bands, songs, venues (especially the Florida ones) were something really special.

In 1993, I was a sophomore at the University of Florida (or point of order, considering the handful of credits under my belt — let’s say I was a second-year student).

After wrapping up a glorious first-year campaign, Steve Spurrier was our football coach, I pledged the Alpha Tau Omega fraternity and successfully navigated year one of the collegiate experience to a soundtrack of mostly “grunge” music (Pearl Jam, Alice in Chains, etc.) in Florida.

I don’t think I caught too many live shows that year, either, except for the Black Creek Band, a band of our friends who were building a massive following in the Sunshine State.

However, that was all about to change in a big way as 1993 brought the jam band scene to my door loud-and-proud like Al Czervick (Rodney Dangerfield) showing up at Bushwood Country Club.

In 1993, my girlfriend Erin was ground zero for me on this music. She spent her first year of college at the University of Georgia and transferred to UF with some cool CDs in tow.

Two I remember clearly was Phish’s first album “Junta” and the self-titled album by Widespread Panic (which was their second record). WOW.

Just as Ratt and Mötley Crüe blew my mind as a 13-year-old, these bands were doing the same to 19-year-old me. Concurrently, as earlier generations had enjoyed similar tunes from the Grateful Dead and the Allman Brothers, this was our generation of hippie bands, and they were starting to play all over Florida.

Let’s call these bands the Big 4 of the jam band scene as they were the ones driving the boat (Phish, Widespread, Dead, Allmans). With some other tunes in the mix of course like Zappa who Tulane Teddy introduced me to and then there was Dylan whom my friend Bonnie gave me the crash course on.

OK, the first Phish listen was like, what the hell is this (kind of like Frank Zappa mentioned earlier)?

These musicians were obviously talented, but this was so sonically goofy, such gems as “Contact,” “Fluffhead” and “Fee” were far off the grid from being normal tunes but very eclectic and a fun listen.

However, you really can’t “discover” that band until you see them live.

Next, is the Widespread album. “Walkin’ (for your love)” is a first listen toe-tapping instant love kind of song plus tunes like “Makes Sense to Me” and “C Brown” showed the depth and diversity of this outfit. As a bonus, the guitar tone was chain saw-esque, Michael Houser brought the thunder and future tunes like “Diner off Everyday” would really highlight that sound.

Just like Alice in Chains’ guitar sound welcomed me to grunge music from metal, Widespread did the same thing with that impressive tone.

Maybe that is why I thought Phish sounded so goofy at first with the lack of a big Marshall stack and a Gibson banging out some power chords.

OK, so next would be the live shows, and before we talk about HQ (Gainesville) and ground zero for us we have to talk about the first Dead show. Talk about a wild first jam band show.

Erin told me in 1993 she had tickets for two nights at the Omni in Atlanta and a place to stay with an old UGA bud. Saddle up, Erin and I got separated for most of the first evening of March 21, 1993 (pre-cellphone Dead shows were a madhouse), but in a very deadheaded way, I met some nice folks and hung with them and spent the night at their house by the Omni.

Probably would not do that again (the whole stranger danger thing), but they were so hospitable and had seen dozens of shows and were blown away that it was my first.

Next night, after a cab (I wrote the address down, smart move) to where Erin and I suited up for an even better show, the final nights set featured “Sugar Magnolia,” “Uncle Johns Band,” “Franklins Tower” and SOOO many classics. It was unforgettable. Next day back to Florida for a year of amazing rock ’n’ roll and even some classes in between.

My first Widespread Panic show was at the Moon in Tallahassee (Scott Carswell doing his thing then and still today). Some cool things about this show were that my friend Ali in Tally, introduced me to her neighbor Turner and for me, this was the first intro that led to a group of friends that I would spend the next few years with (and some still today).

This was a unique blend of characters from Jacksonville (Gina, Darby, Turner …) Tampa, (Teil, D.I. …) and Tallahassee (and all over) that had the same high school friends (and new college friends) and we started attending the same shows all over the region.

At any given show there were at least 50 of this crew in attendance.

You know who you are and in fact two of those, Bonnie and Ali, I was inseparable with for live shows.

The three amigos? Bonnie, Clyde, and Ali? Whatever it was, it was one thing — family, a live show family. Hell, in 1995, I was backpacking in Europe and ran into some of this crew (Juan, Blair, Keeley, etc.).

This crew was everywhere. Especially at festivals, Super Jam in Athens with Dave Mathews and Widespread Panic in the pouring rain was epic.

I borrowed my grandparent’s van for that one or the HORDE tour in 1994 with Widespread, Blues Traveler, Col Bruce, The Samples and Allgood was as good as it gets for an all-day jam band affair. Wow.

(“Hey Sharp, want to go to a concert,” I asked my brand-new friend in the hallway of the frat house; we left within the hour of the invite. Such was the times of 1994. That guy in the hallway ended up being best man in my wedding and vice versa.)

In Gainesville in the 1990s (like most college towns), clubs had live music every night: Richenbachers, the Florida Theater, Market Street, Dirty Nellies, Covered Dish, Brick City, Gatormeisters, the Swamp (to name a few).

When the Big 4 weren’t around, you might see on any given night: The Freddy Jones Band, Jupiter Coyote, What it Is, Big White Undies, Less than Jake, Dave Matthews, The Samples, The Grapes, Big Sky, Spider Monkey, Uncle Mingo, Black Creek, Sugar Top Groove, Dingofish, or a million others. Every night there was a great show to check out if you wanted. It was a true vibrant music scene.

As mentioned earlier our friends in the Black Creek Band were a favorite of the scene. Their lead singer Cam led that crew into town often; it was always a massive party with a huge entourage of characters always with them.

They played a bluesy Southern rock and always packed the house plus they were solid human beings and never scared of a good time, cheers to Jason F, Richard, Cam, Goodgame, and Jason M.

However, when the big boys did come to town there was no cooler place to see them than the outdoor venue in the middle of the UF campus called the Bandshell. I saw 3 of the Big 4 play there back then, the Allman Brothers, Widespread Panic, and Phish. The Allman Brothers played it several times.

In fact, you can check this show from way back here:

Also, back to Phish; I dogged them earlier listening to the record. But the week of Oct. 23, 1994, we caught Phish on a three-day run through Florida. Night one in Ft. Lauderdale was a Top 20 show of all time. They blew the doors off, the Sunrise Theater was shaking, walls and floors during the song “Run Like an Antelope” and I discovered live that they had a booming guitar sound also.

The goofiness of that first studio album was not reflected in the live show. They tore it up, the run ended back home at HQ with everyone I knew at the time outside on a beautiful day at the Bandshell to hear the band at its peak, and they played Purple Rain by Prince? How cool is that?

The Allman Brothers (unlike the Dead in the mid-nineties) were back on top of the charts with their record, “Back Where it All Began.” Unlike the Dead shows we caught (the next show was Tampa and we camped out with hundreds of other fans to get the complete hippie experience) which showed that the band was not on top of their game (legends but a little haggard in the 90s). But the Allmans shredded, Warren Haynes was killing it on guitar, and Dickey and Gregg were in the pocket as usual. When they played the bandshell at UF in November 1993 it had the vibe of a Southern-style Metallica concert.

Oh, and these shows were free for students thanks to the awesome people at Student Government Productions at UF.

These times, shows, bands, songs, venues (especially the Florida ones) were something really special.

It was a time before the real world got ahold of us before bills and responsibility. A time for friendship, a time of instant camaraderie, where sharing time and a show was almost spiritual. That show family grew up eventually (sort of), but they are all still out there — this one is for them. Cheers to ‘ya (as the Panic lyrics say): “And there is a party. Everyone is there. Everybody gonna leave at exactly the same time. It’s hard to imagine that nothin’ at all could be so exciting, could be this much fun.”

Blake Dowling is CEO of Aegis Business Technologies, author of the book “Professionally Distanced,” host of the Biz & Tech podcast and he saw the Grateful Dead in Las Vegas on their last tour. That was the end of an era and a fantastic farewell to Jerry and Company as Dave Matthews opened each show and Widespread Panic played every night in town after the Dead show. You can reach Blake at [email protected].