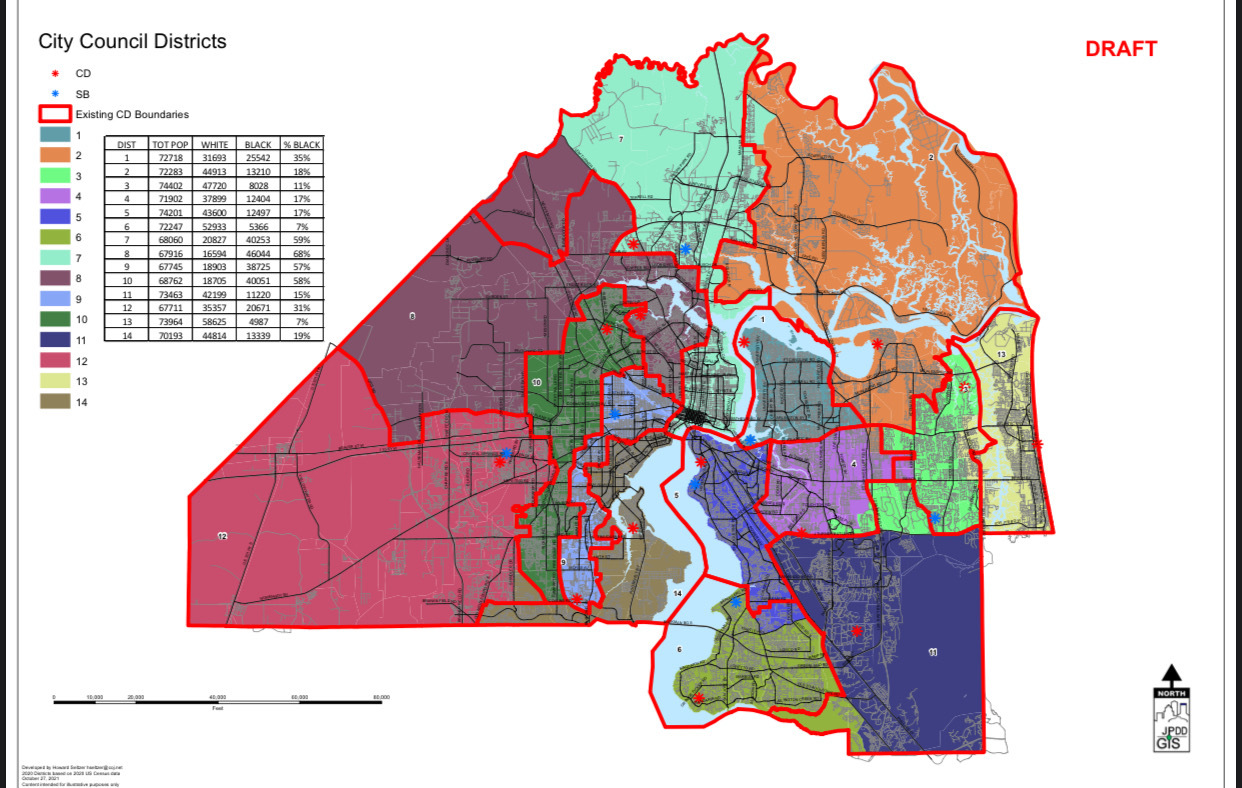 Republicans don’t hold a plurality of registered voters in Duval County, but they will likely hold a City Council majority for the next decade under district maps approved Tuesday night.

The 19-member Jacksonville City Council approved its redistricting map, after weeks of public excoriation of the Council for essentially replicating the current maps that pack Black voters into four carefully-drawn districts.

The Rules Committee had approved the map previously by a 6-1 vote, a prologue to a vote where incumbent Council members celebrated the system that gave them political life.

Though Duval County has a Democratic plurality, Republicans have a 14-5 supermajority on the City Council, in no small part due to the concentration of Democratic voters in minority-access districts north and west of the St. Johns River. Republicans control all five citywide at large seats in addition to nine of the 14 districts.

The Duval Democrats decried the gerrymandering as “unfair,” an effort to “artificially inflate the Republican position” before the vote, but to no avail.

Some of the strongest advocates for the maps were the Democratic Council members who helped to draw them in committees ahead of the final vote. One also helped to lay the rhetorical justification for the vote Tuesday night.

Rules chair Brenda Priestly Jackson noted that three redistricting committee members were from minority-access districts, noting that they heard no concerns early about the maps in districts 7 through 10, where Black voters represent at least 57% of the electorate. She noted also that there were multiple districts with more White voters than that proportionally “and no one raised an issue.”

Priestly Jackson addressed “packing” allegations, saying that “residential segregation” was actually what determined the districts. She also noted the Consolidation promise of four minority-access districts, saying it would be wrong to “dilute the neighbors.”

She noted that the decision was to “build on what we have,” citing the work done by a previous Council after the 2010 census as the model. Then she suggested the “issues” relative to packing were raised by “those who live outside the district primarily” and not by her “neighbors in District 10.”

Republicans Danny Becton and Nick Howland hailed the integrity of the process, enthusiastically affirming the work product. Becton noted the 2010 changes helped to shape the Southside and create geographic integrity there and at the Beaches.

“It’s a true example of how we function best as a Council,” said Aaron Bowman, another Republican “yes” on the map.

The sole dissenter, Republican Rory Diamond, said the maps preserved the “status quo” and ignored the reality of changes over the last decade in Jacksonville.

previousOrlando-area 'Queen of Versailles' will fundraise for Rachel Plakon

nextLast Call for 3.22.22 — A prime-time read of what’s going down in Florida politics