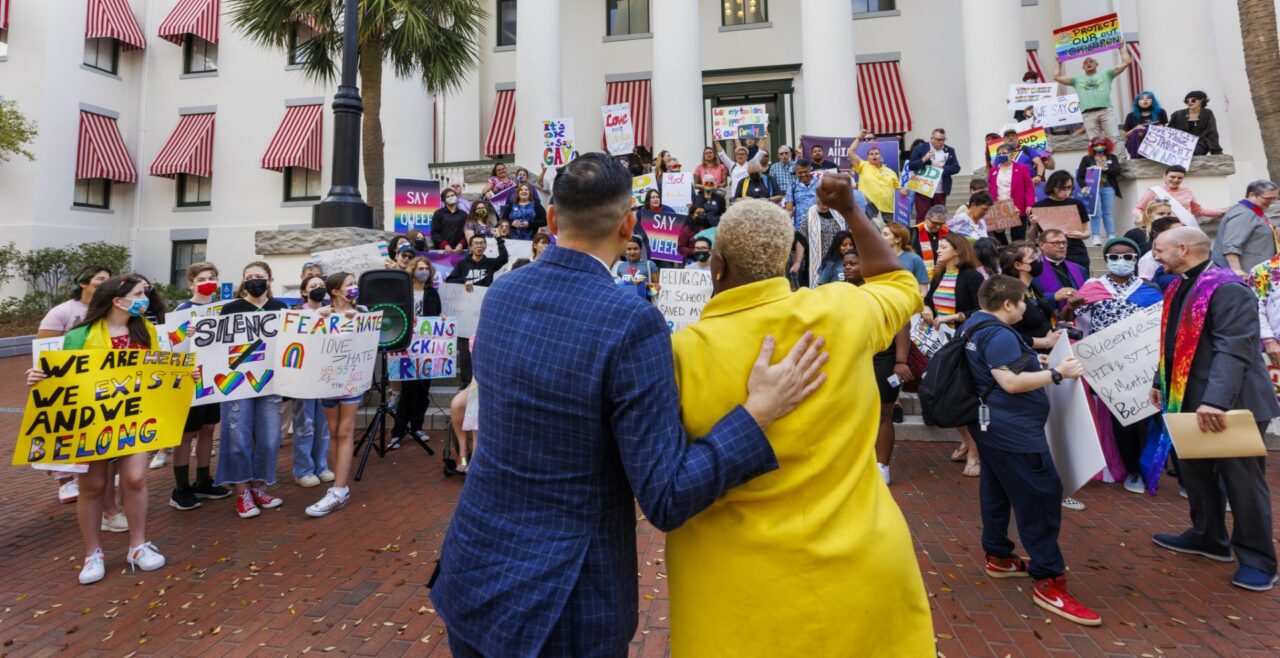 'Identifying as LGBTQ+ and caring about LGBTQ+ kids is not a "leftist agenda."'

Gov. Ron DeSantis on Monday signed the controversial HB 1557 into law. The measure is known as the Parental Rights in Education bill or, as critics call it, the “Don’t Say Gay” bill.

The bill limiting instruction on sexual and gender identity in public schools has already made a major impact. It prompted Disney to suspend political contributions. The company publicly condemned the bill, but had previously donated to lawmakers who supported it. The measure was also the subject of a joke in the opening remarks of the Academy Awards.

The bill was one of the most talked about and fiercely debated of the Session. Proponents of the bill criticized the label “Don’t Say Gay” as being inaccurate, as that specific wording is not in the bill. But the Governor and other speakers frequently referenced a push to keep gay and transgender information out of school curricula. Florida House Speaker Chris Sprowls said during the signing that the conference that the “fight is clear.”

“Do you think it’s appropriate for kids to walk into a classroom when they are five and six years old to learn about transgender instead of math or science or photosynthesis or whatever it is for that day?” Sprowls said. “Do you think that’s appropriate?”

Lawmakers were quick to react in statements and on Twitter. Here is what some had to say.

BREAKING: Ron DeSantis just signed his bigoted and homophobic Don’t Say Gay bill. This is unacceptable and we need to defeat him. Like and retweet if you agree.

“This new law doesn’t help a single Floridian pay their rent, put food on the table, or afford health care. It does not create a single new job, protect our waters, or solve our growing insurance crisis.

This is nothing but a political distraction designed to raise one man’s profile as he runs for higher office. Unfortunately, this Governor is more interested in appealing to Republican presidential Primary voters in Utah and Mississippi than he is in showing compassion and leadership to the people of Florida. This bill wasn’t necessary, and claims to solve a problem that frankly doesn’t exist. The words of the bill sponsors and the Governor’s own staff clearly laid out the real purpose: they don’t like the LGBTQ community, and don’t mind sacrificing their safety to advance their agenda.”

“Schools should be safe and enriching places for children to learn and thrive. Sadly, Republican leaders in our state are working tirelessly to erase the lived experiences and history of LGBTQ Floridians to win more votes from their base. These divisive culture war stunts distract us from their failure to address the housing crisis, and workforce shortages, while doing little to provide struggling folks with the permanent, meaningful tax relief they need. In Florida, we should be united in fully funding schools, paying our teachers well, and ensuring our children are supported.”

“I want to be clear that identifying as LGBTQ+ and caring about LGBTQ+ kids is not a “leftist agenda” nor is it inappropriate for educators to acknowledge the fact that LGBTQ+ people are real and exist. The intent of this bill is to erase queer students and eliminate any programming that helps them feel safe and supported. We heard from the Senate bill sponsor himself that he thinks children identify as LGBTQ+ because they want to be famous, and we heard comments from another Senator that “gay is not permanent.” This is what fueled the passage of this bill, and instead of solving problems like the rising cost of rent in Florida, our Governor has continued to attack a group of people he clearly doesn’t think should even exist.”

.@GovRonDeSantis just signed #HB1557! It’s clear that an overwhelming majority of parents agree it's their right to be involved in their children's education and that radical gender ideology does not belong in classrooms of our 5 and 6 year olds! 🇺🇸🇺🇸🇺🇸 #jaxpol #flapol pic.twitter.com/ATSYLr9j5s

I don’t know any teachers in Florida’s elementary schools teaching kids to be gay or transgender. Yet we spent an entire session creating a culture war instead of addressing the Housing Crisis in Florida. Seriously. DeSantis has got to go!

“Gov. DeSantis failed the people of Florida today by signing the Don’t Say Gay bill in spite of the outrage of the entire nation, especially the outrage of the parents, students, and teachers who came to speak in person against this legislation. This is a dark time in Florida and a stain on our state’s history all because of one man’s desire to fulfill his political ambitions at any cost. The role of our elected public officials should never be to cause so much agony and uncertainty of an already vulnerable group. I want the kids and parents out there who are in fear right now to know that this dark time is temporary and we must not give up in the pursuit of freedom and safety for our LGBTQ families and individuals. This is the time to recommit to the fight for equality and empower our youth to be the stewards of democracy and the representation needed at every level of government.”

THANK YOU @GovRonDeSantis for signing the Anti-Groomer Bill today

“By signing #DontSayGay into law, DeSantis is attempting to censor and exclude an entire community of people from our public schools for his own political gain. This law doesn’t solve any problem that exists. Instead, HB 1557 has been weaponized by the Governor’s office to launch a bigoted smear campaign to attack and defame LGBTQ Floridians with baseless accusations of grooming and pedophilia. HB 1557 does absolutely nothing to prohibit conversations about sex, sexual activity or sex ed with young children, despite its proponents’ claims.

“The bill’s intentionally vague language leaves teachers afraid to talk to their students and opens up school districts to costly and frivolous litigation from those seeking to exclude LGBTQ people from any grade level. Even worse, #DontSayGay sends a hateful message to our most vulnerable youth who simply need our support. The battle against #DontSayGay is far from over. To those LGBTQ youth in Florida and around the world struggling to find support, just know that you are loved exactly the way you are and we’ll continue to fight for you every single day because your lives are worth fighting for.”