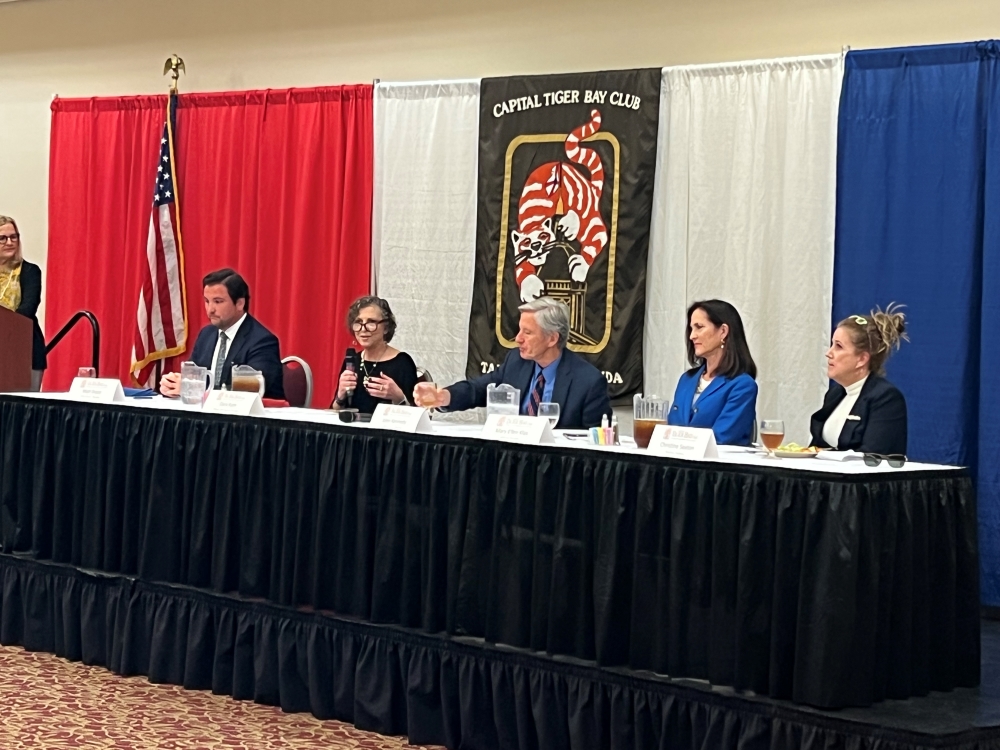 'The sausage is cooked and made and curdled and fried long before a bill ever even pops up.'

Five capitol reporters across different news outlets made predictions about several trending political issues while on a panel during a packed Capital Tiger Bay luncheon Wednesday.

The reporters included Christine Sexton of Florida Politics, Matt Dixon of POLITICO Florida, Dara Kam of News Service of Florida, John Kennedy of USA Today and Mary Ellen Klas of the Miami Herald/Tampa Bay Times. They made predictions about the upcoming Special Session and 2022 election cycle, while also touching on issues they covered during the Legislative Session.

All five panelists agreed that they don’t expect the Special Session to expand beyond redistricting due to its short three-and-a-half day length and the distance between legislative leadership on pressing issues, like property insurance reform.

Kennedy said legislators would have to quietly negotiate to get bills passed in the timeframe, something he doesn’t believe is likely.

“I don’t know if this Legislature, after failing to cross the finish line in two months on some of these issues, is ready to quietly negotiate a plan that they could pass in three-and-a-half days,” Kennedy said.

According to Kam, such negotiations would have to happen before the Session convened, as the process of watching the sausage being made no longer happens in the public eye.

“There is none of that anymore. The sausage is cooked and made and curdled and fried long before a bill ever even pops up,” Kam said.

While Gov. Ron DeSantis has said he is open to dealing with more issues during the Special Session, Klas said stating that position was the right political move, but other issues are unlikely to be tacked on. She said she wasn’t confident that the redistricting issue will even be resolved, or avoid a second DeSantis veto.

However, Sexton pointed out that a possible November Special Session that DeSantis has been signaling could come to fruition. She said Speaker Chris Sprowls has been hesitant to tackle property insurance, meaning legislators may want to revisit the issue in November when Sprowls is no longer Speaker.

When the topic on the panel shifted to the 2022 election cycle, Kam predicted that while Charlie Crist will win the Democratic gubernatorial Primary, Republicans will win in every executive race on the ballot, including re-elections for DeSantis, Attorney General Ashley Moody and CFO Jimmy Patronis. Kam also said Senate President Wilton Simpson, a Trilby Republican, was the favorite to be the next Agriculture Commissioner.

Every panelist agreed with her prediction, highlighting the historical significance of an all-Republican executive office and what that demonstrates about Democratic opposition in the state.

“Those predictions, if true, will mark a remarkable point in Florida history too, because you will have no Democratic statewide office for the first time since pre-Civil War, since the Whigs were around,” Kennedy said. “I similarly don’t see an avenue for Democrats to win at this point.”

Sexton said Republicans pushing for culture war related bills — like the 15-week abortion bill and the controversial Parental Rights in Education bill — has energized their base in an election year. She added that Republicans are more comfortable that the legislation won’t be shot down because of the Republican appointment-dominated U.S. Supreme Court and a Florida Supreme Court in which DeSantis appointed three judges.

Dixon said rinse and repeat efforts have fueled Democratic failures in the state for the last two decades. He said they have been unsuccessful at mobilizing their supporters to the same level as Republicans, and groups like the Democratic Governors Association don’t think Florida is winnable anymore

“Every year going into an election cycle we talk about, ‘Can Democrats do that this year?’ And every year the panel is like, ‘No.'” Dixon said. “The Republicans will campaign and register voters and talk to voters in off years. Democrats don’t.”

Kennedy said that Florida is turning into a red state. Several of the panelists interjected that it already is.

In a statement to Florida Politics after the event, RNC Spokesperson Julia Friedland agreed with the election predictions.

“Just remember, things could always be worse. You could be a Democrat campaigning in Florida in 2022,” Friedland said.