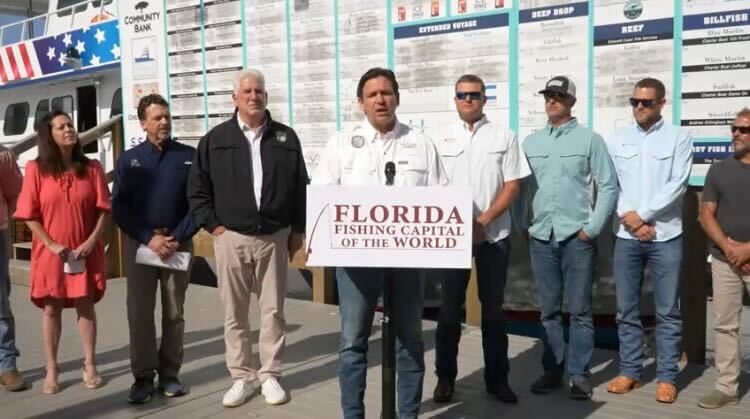 'Why are they doing this? They like to exercise power over the people they govern.'

“There should be no mandates, period. None,” DeSantis said to cheers.

“I think the airline mandate is to me one of the most cruel,” DeSantis argued, saying that due to “air filtration” systems, “you just don’t have outbreaks on planes.”

“They keep clinging to this forcing people on an airplane to wear it. And the thing is, you’ll have somebody sitting in an aisle seat and they will put the mask down and fake nibble on peanuts for two hours so they don’t have to have a covering, so they can breathe freely, and it’s all a charade,” DeSantis lamented.

“This is COVID theater,” DeSantis said. “But what it is is, they are trying to prolong the misery that these flight attendants have had to deal with.”

DeSantis has been messaging aggressively on this issue since the decision earlier this week in the Middle District of Florida, in which U.S. District Judge Kathryn Kimball Mizelle ordered an end to federal mask mandates on public transportation.

DeSantis went on to call the appeal “totally outrageous,” an attempt to “reimpose mandates to prolong the misery.”

“Why are they doing this? I think part of the reason is they like to exercise power over the people they govern.”

DeSantis decried such moves to “take decisions out of your hands” as evidence of the “coercive power of the state to take away your freedoms.”

DeSantis has suggested the Biden administration’s intransigence on the public transportation mask mandate is motivated by an anti-Florida animus.

“We filed a suit against this right before it was supposed to expire and I think because Florida filed the suit, Biden extended it just because he doesn’t want to give us a win. But by him extending it, it did allow this judge in Middle Florida to be able to rule,” the Governor said Tuesday during a press conference in The Villages.