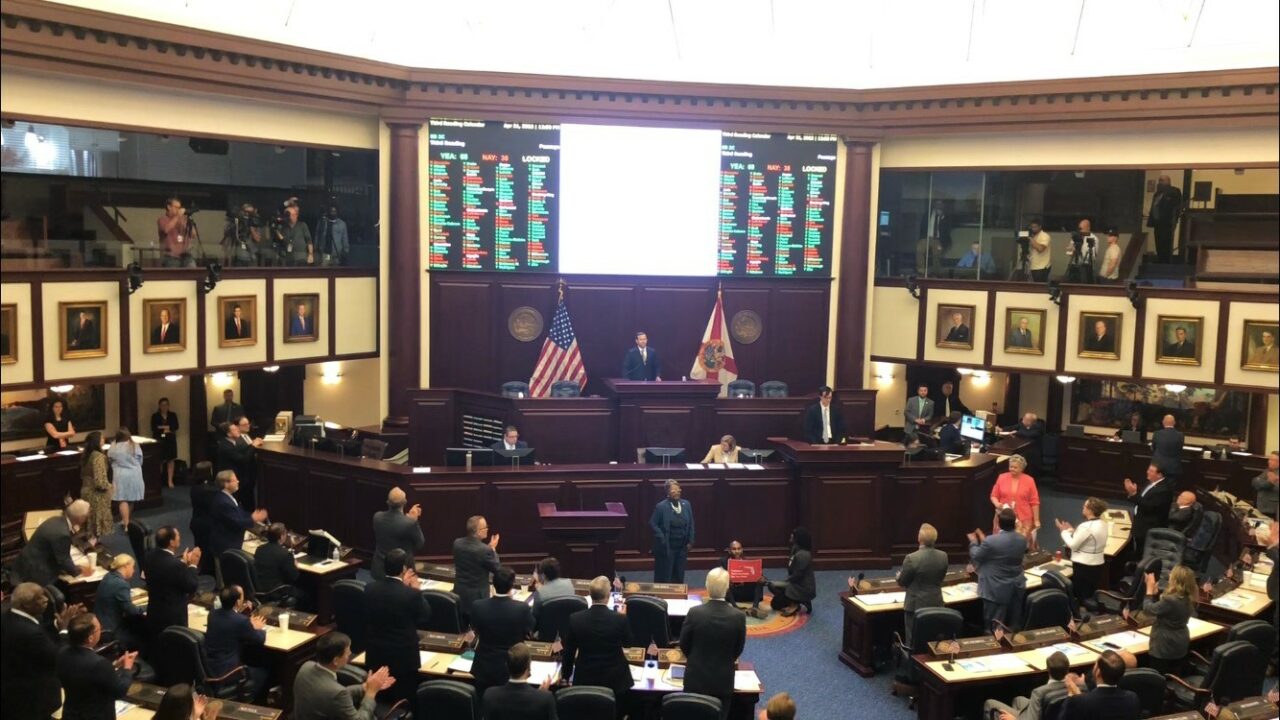 As members of the Legislative Black Caucus sat on the House floor in protest over the redistricting process, Republican leadership pushed through with votes on the day’s business, including a bill to remove a carve-out for Disney Plus in Florida’s social media deplatforming bill.

Lawmakers had allotted 40 minutes of debate on the Disney Plus bill (SB 6C), plus two hours of debate on a bill to eliminate Disney’s self-governing district (SB 4C). But House Speaker Chris Sprowls and Republicans put the Disney bills to votes without discussion. Sprowls gaveled the House done for the day as Democratic Reps. Travaris McCurdy, Angie Nixon and more chanted, nearly drowning out the House Speaker.

By a 70-38 vote, along party lines, the House approved the bill, which will remove a carve-out for companies that own theme parks from a law that tries to protect Floridians from social media “censorship.” The exemption, approved less than a year ago during the final days of the 2021 Legislative Session, deliberately targets the Walt Disney Company and Disney Plus.

Lawmakers initially were meeting this week only to pass a new congressional map. But on Tuesday morning, Gov. Ron DeSantis expanded the scope of the Session to include legislation targeting parts of state law that create special cases for Disney.

While Democrats contended they oppose carve-outs, the topic has been controversial because it emerged after a public spat between Disney and DeSantis over Florida’s recent Parental Rights in Education law (HB 1557). That legislation, dubbed the “Don’t Say Gay” bill by critics, prohibits classroom instruction on sexual orientation and gender identity before the fourth grade and opens the door for parents to sue School Boards over instruction about LGBTQ topics they oppose.

“They’re using the full power of the state of Florida to enact retribution against their political opponents, namely Disney, who had the gall to stand up and defend LGBTQ Floridians. That was a bridge too far for Gov. Ron DeSantis and his Republican enablers in the Florida Legislature.”

House Democratic Leader Evan Jenne told Florida Politics he believes every member of the Legislature and Cabinet have taken money from Disney at one point.

“All they said was, ‘We don’t hate gay people,’ and it leads to a bill being slammed on at the beginning of Special Session,” Jenne said.

The vote, held after more than an hour of protests from Democrats on Thursday, followed the Senate’s 26-14 vote the day prior. Next, the legislation will head to DeSantis for his approval. With his anticipated signature, the bill will take effect immediately.

The protest began as Democrats’ debate time expired on the bill to pass the congressional maps drafted by DeSantis’ Office. Democrats called DeSantis’ involvement a breach of the separation of powers and argued the maps would reduce the representation of Black Floridians in Congress.

In a statement after the House adjourned, Sprowls issued a statement accusing some members of violating House rules and “hijacking” the process.

“We saw a group of Florida House members with microphones at their desk, a statewide audience, and an opportunity to vote on behalf of their constituents, and they instead chose to pretend they had to stage a protest to be heard,” Sprowls wrote. “House Democrats requested and agreed to 75 minutes of debate time on congressional maps, and they used the entire time. They did not request any additional time prior to the group’s disruption.”

As Black lawmakers and other Democrats protested, current and future leaders of the Republican, Democratic and Legislative Black caucuses met in an attempt to resolve the dispute. House Democratic Policy Chair Fentrice Driskell, who is expected to become the Democratic leader in 2024, said Democratic leadership attempted to negotiate additional time to meet with caucus members.

“Unfortunately, things happened so fast we didn’t get that opportunity to have that conversation and the Speaker instead decided to move the question and to finish the business of the day without hearing debate from both sides,” Driskell said.

Jenne said he believes Sprowls pushed forward with the votes to prevent sit-ins, unseen in recent Florida history, to become a tool in the legislative process.

“Look, he had the authority to have the sergeants pull them off the floor, and I’m thankful that he didn’t go to that extreme,” Jenne said.

“I have a hard time understanding why that would be a controversial issue. Let’s apply the law equally to everyone,” Bradley said. “In case there was any doubt in the court’s mind where the Legislature stood, it’s that we do not stand with special carve-outs.”

DeSantis proposed last year’s social media deplatforming bill (SB 7072) after Twitter and other prominent social media companies removed then-President Donald Trump from their platforms following the U.S. Capitol riot. By the time the bill reached the Governor’s desk, it contained an exemption for companies that own theme parks, which Spring Hill Republican Rep. Blaise Ingoglia said was a move to protect Disney Plus.

Freelance investigative reporter Jason Garcia wrote in February that language protecting Disney Plus arose after conversations with the Governor’s Office. The Governor’s staff and legislative staff were resistant to Disney’s suggestions, according to the report, but eventually adopted the theme park approach.

In July 2021, hours before the social media legislation was supposed to take effect, federal Judge Robert Hinkle in the Northern District of Florida pumped the brakes on the law, citing the exemption as one of several reasons he viewed the law as unconstitutional. An appeal to that injunction heads to oral arguments on April 28.

“If Gov. DeSantis had realized sooner that the internet regulations his own office lobbied for were wrong, he might have saved Floridians hundreds of thousands of dollars in legal expenses,” Schruers said. “But this law is wrong not because the Legislature carved out a once-favored Florida company, but because the government has no business dictating what speech private businesses must host.”