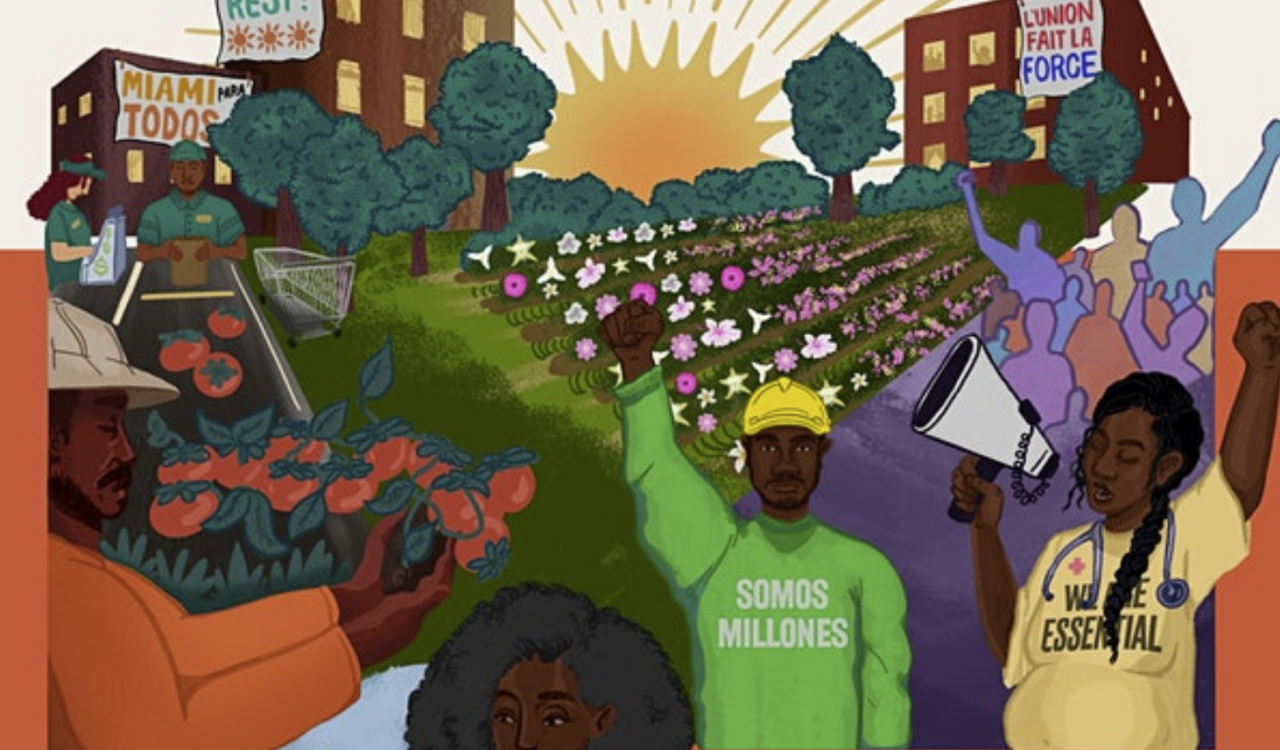 Many of the events call for a “Tenant Bill of Rights.”

Community organizations and progressive protesters across Florida will unite this May Day to demand reform addressing the state’s mounting need for reform around housing affordability, immigration and labor.

On Sunday, May 1, Miami-based nonprofit Florida Rising and its partners are planning events in major cities throughout the state, beginning in Tampa and concluding in Hollywood. Related events that day will occur in Miami, St. Petersburg, Sanford, Orlando, Hollywood and Jacksonville.

All will run under the banner, “Justice on Every Block.”

Then, on Saturday, May 7, the group and several other organizations will host a community celebration in West Palm Beach.

The importance of May Day — known also as International Workers’ Day in the United States and Labor Day in some countries, including Canada — has lost its zeal over the years, according to Reenie McHarg, a Florida Rising member in Central Florida.

“As a member of Florida Rising, I’ve gained a deeper respect and understanding of why I should be an ally for international workers and how they’ve contributed to (the) society … I now benefit from,” she said. “We should all stand in solidarity not just for essential workers, but for our international brother and sister as well.”

View details about each event below.

The groups say the gathering is preparation for a May 26 Council meeting, where they plan to advocate for a tenant bill of rights and “more comprehensive solutions to the current voucher program that falls short of what residents need to confront the rising housing costs.”

Passersby can expect to see Tampa community members waving housing-themed signs along nearby city streets, according to a Florida Rising press note.

At noon, there will be a screening of “At the River I Stand,” a 1993 documentary about the two months leading to Martin Luther King Jr.’s death in 1968 and the 65-day strike of 1,300 Memphis sanitation workers.

Beginning at the Stephen P. Clark Government Center in downtown Miami, 111 NW 1st St., people will march throughout the city to demand “living wages, safe and dignified jobs, and the right to house.”

Elected officials, community leaders and faith leaders are expected to participate. So are several organizations, including the Miami Workers Center, WeCount!, South Florida AFL-CIO, Farmworkers Association of Florida, SEIU Florida, Communications Worker of America, We are Home, Florida Rising and Fight for $15, whose members “will be sharing their personal testimonies and marching in Downtown Miami as one united and growing labor movement.”

For more information or to register to participate, visit the march’s Eventbrite page.

A march for workers’ rights and immigration reform will begin with a rally, including performance art, music and personal testimonies, at the Walt Disney Amphitheater at Lake Eola Park — known to locals as the bandshell — at 195 N Rosalind Ave.

“On this International Workers Day, we stand in solidarity with immigrants and workers who are fighting for respect and dignity,” said Eric Clinton, president of UNITE HERE Local 362. “We honor the contributions of those who fight to create a more just society for all.”

Added Neza Xiuhtecutli, general coordinator for the Farmworker Association of Florida: “Immigration status would bring down so many of the barriers that immigrants and essential workers face every day in their ability to advocate for themselves. It is also a path to dignity and respect for their contributions to society.”

Following the rally, participants will march around Lake Eola.

“On May 1, a day designated to honor the rights and contributions of workers, the groups will gather and hold a speak-out against residents impacted by the rising cost of housing and government inaction to address it,” a press note for the event said. “They say they want to ‘make it clear through their votes and policy choice that regardless of your zip code, we all have a right to the things that make us happy, health, and whole.’”

Florida Rising, city residents and others will congregate at the Seminole County Courthouse at 301 N Park Ave. to call for a tenant bill of rights that would keep residents in their homes and protected from the threat of eviction and homelessness.

Osceola County residents, Florida rising and other community allies will hold a press conference to call for a tenant bill of rights at Kissimmee City Hall, 1010 Church St.

Attendees can expect to see dozens of Jacksonville residents with signs, banners and an art installation of 26 pieces of furniture representing the “26,000 Jacksonville households that have faced eviction” since December, a press note said.

The press conference and rally come amid a more than 30% uptick in rent costs throughout the city and an “epidemic of evictions with the call for (the) City Council to vote to declare a housing state of emergency (and) take swift action to keep long-time Jacksonville residents in their homes.”

At the Lakeside Park Estates mobile home park, 3300 Pembroke Rd., Florida Rising will rally alongside residents who received eviction notices in March from the company that owns the land, Trinity Broadcasting Network, which bills itself as “the largest Christian Television Network.”

“The families, many of whom have lived in their home for more than a decade, say that they are seeking a dignified resolution with the Christian company,” a Florida Rising press note said. “Trinity’s move to evict (them) and (its) subsequent refusal to discuss the impact of their policy shows the urgent need for a Tenant Bill of Rights in Broward County as a whole.”

The event will include the unveiling of a “Tenant Bill of Rights.”