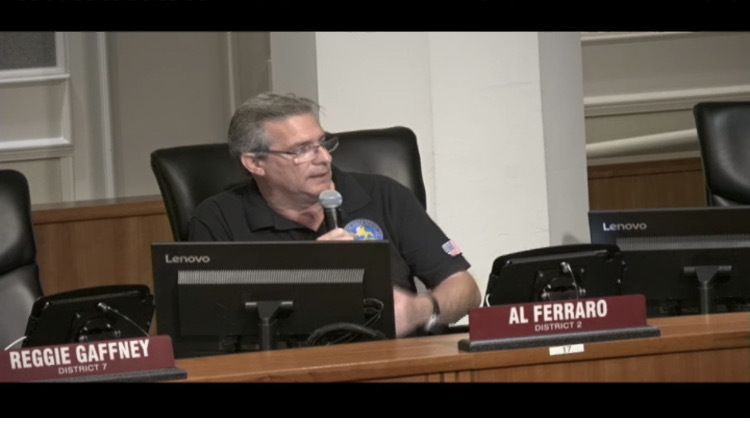 'This is not a both sides argument.'

Legislation to compel a referendum on maintaining or removing historic monuments — including controversial confederate edifices — in Jacksonville continues to struggle in City Council committees.

The Neighborhoods, Community Services, Public Health and Safety Committee Tuesday turned down legislation (2022-265) from Republican Al Ferraro that would greenlight a citizen vote on whether all monuments should stay as they are. The 5-2 vote saw only Republicans Kevin Carrico and Randy White back the proposal.

The referendum “City Removal of Historic Monuments and Markers On City-Owned Property” would pose the question: “Shall the City of Jacksonville remove historic monuments and markers, defined as fixed assets that are identifiable because of particular historic, national, local or symbolic significance, on City-owned property?”

But the appetite for a full vote continues to be minimal in the St. James Building.

The committee had reported unfavorably on the bill two weeks prior. An amendment clarifying this wouldn’t be a charter amendment was advanced by Ferraro, who said “everybody” had been “reaching out to (him)” to get a referendum measure.

Ferraro noted this would be, with an amendment adopted in the committee, a nonbinding referendum on something Council “should have taken action on,” as he continued to describe the will of the “community” and stressed that the bill wasn’t about “Black or White.”

NCSPHS Chair Aaron Bowman is advancing a proposal to have outside help come in from the University of Virginia to get community input on the future of the statues. Ferraro said “the community doesn’t want” that input.

While the “community” might want a referendum, the committee felt otherwise. Democrat Joyce Morgan and Republican Ron Salem were two who said voters would assume the referendum was more than a “straw ballot.”

“Why would we do this to our citizens,” Morgan said, “and make them believe that this is going to happen and they can overrule Council and all that?”

Ferraro said people knew the referendum wouldn’t change anything, but that people were sick of the Council’s dithering.

Chairman Bowman angrily denounced the bill, saying he found the concept of a referendum on minority rights to be preposterous, setting into motion a round of denunciations of the proposal from Ferraro, a second-term City Councilman running for Mayor as a champion of social conservative causes.

“This is not a both-sides argument,” thundered Democrat Brenda Priestly Jackson.

Public comment on the proposition has predominated in recent Council meetings, compelling Mayor Lenny Curry to call for Council to make an actual decision on the future of monuments, specifically one in Springfield Park honoring confederate soldiers’ wives.

“The Jax City Council should take a yes-or-no vote on the removal of monuments that represent the oppression of people. The people of Jax, that elected you, deserve to know where you stand. They elected you to make decisions,” Curry tweeted recently as a series of speakers in favor of maintaining a Confederate monument in Springfield Park supported a referendum on the topic.

Curry’s proposal to move the monument was rebuffed last year by City Council committees, before being withdrawn ahead of a likely “no” vote by the full Council.