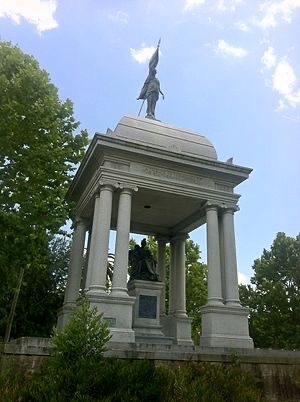 City Council would have to allocate $1.3 million to move the statue.

The Transportation, Energy and Utilities committee’s no vote came just hours after the Neighborhoods, Community Services, Public Health and Safety committee voted against the measure.

Many of the same people are on both committees, but the votes suggest the measure won’t get the supermajority approval it needs from the full Council next Tuesday, should it ultimately make it to the floor at all.

No votes in committees don’t block the vote from the floor, as they do in the state Legislature, but they do show the sentiment of the Council, and that sentiment is skeptical of putting money toward this purpose.

“It was a compelling argument that the Mayor took as his own, and it’s the next step in the process,” Hughes said in the second Monday committee.

The Mayor’s Office said $1.3 million would be necessary for a safe removal of the Tribute to the Women of the Confederacy, and a two-thirds vote of the full Council would be needed to release those funds, potentially as soon as next week.

Destruction of the monument is not an option, given the insured value of the monument, $808,000, and the cost of demolition, which would be “hundreds of thousands of dollars,” Hughes said.

Yet just as had been the case in the morning committee, the afternoon vote was sour for Curry’s wishes.

“We’re listening to the loudest voices and not the majority of voices,” harrumphed Republican Council member Randy DeFoor. She later went on to say the money should be spent on women’s housing, but did not offer an amendment to that end.

Council member Danny Becton, also a Republican, offered a “history lesson,” as he was troubled by people characterizing confederate “ancestors of Americans as traitors.”

Becton posed a rhetorical question thereafter: “Are we to go to (Philadelphia) and remove the Liberty Bell and all the monuments of the Revolutionary War too?”

“We’re going to be looking at street signs, bridges, all kinds of other things to take them down,” Ferraro warned. “Starting to take down history is a dangerous thing.”

“When I first came into office, this was not even talked about as being a problem,” said Ferraro, who is running for Mayor in 2023.

Not all Republicans agreed with the GOP consensus. Council member Matt Carlucci offered extended remarks in support of the move.

“The price is a concern, but you cannot put a price on the healing of the city,” Carlucci, also a candidate for Mayor in 2023, said.

There was more debate in the afternoon than the morning vote, which was 4-1 against moving the money.

Finance takes up the bill Tuesday, and then it’s up at the full Council a week later.