The Cuban people 'have been met with apathy from the highest levels of the Church hierarchy.'

Three members of Congress from Miami-Dade have called out leadership within the Roman Catholic Church for its weak response to human rights protests in Cuba.

In a joint letter Friday to Archbishop Christophe Pierre, the Vatican’s apostolic nuncio to the United States, Republican Reps. Mario Díaz-Balart, Carlos Giménez and María Elvira Salazar expressed “profound disappointment” that Pope Francis has not condemned the Cuban regime’s “egregious abuses of the Cuban people” or expressed solidarity with the people’s demand for freedom.

“The Cuban people have been disappointed in the failure of the Catholic Church leadership to stand with them against oppression, abuse, and tyranny,” the letter said.

Cuban citizens took to the streets throughout the island nation on July 11 to protest decades of oppression by the Cuban communist regime, which is now under the control of President Miguel Díaz-Canel, amid one of the worst economic crises in decades and a resurgence of COVID-19 cases.

Rallies supporting the protests sprung up around the U.S., particularly in places like Miami and Houston, where there are dense Cuban populations. There were also marches to Washington to demand more action from President Joe Biden, whose response disappointed many, particularly Republicans.

Also disappointed is former political prisoner Eduardo Cardet of the Christian Liberation Movement, which was founded in Cuba in 1987 and based on the social doctrine of the Holy Catholic Church.

In an interview conducted about the same time as the protests, Cardet told the National Catholic Register, he — whom the letter from Díaz-Balart, Giménez and Salazar quotes — said the Vatican’s response to what Cubans are suffering “has been feeble.”

“It’s been an evasive, distant, cold response,” he said. “There has been no clear support (from the Vatican) for the legitimate demands that we have been making for so long that we have suffered hardships and lack of rights. There has never been a condemnation of these human rights violations. Instead, they are seen with approval and sometimes even with some complicity.

“Pope Francis has shown clear signs of sympathizing with the ideas of the left. He has demonstrated an exaggerated empathy for the point of view of many liberticides and dictators: Fidel Castro, Hugo Chávez, Rafael Correa, Evo Morales. He has even declared himself very favorably to the ideals of the left.”

Exactly one week after the protests first erupted in Cuba, Pope Francis spoke via livestream on the subject and prayed for “peace, dialogue and solidarity” with the people there who were facing “difficult moments” while struggling with inflation, food shortages and a pandemic.

That was hardly enough for the many Cuban Catholics on and off the island who “feel abandoned” by the church hierarchy, according to Díaz-Balart, Giménez and Salazar.

The Vatican, they wrote, “has failed to condemn the Cuban dictatorship’s daily assault on human dignity, or to even proclaim the God-given rights of the Cuban people to speak, assemble, and worship in peace.”

The letter mentions reports of Vatican police in late October forcing a group of protesters to lower their Cuban flags in St. Peter’s Square and confiscating some of the flags from less cooperative members of the group.

“On a different day, some Cuban worshippers reportedly were denied access to St. Peter’s Square,” the letter said. “The Cuban people seek solidarity from leadership within the Church to stand with the oppressed and affirm the innate dignity of the human spirit. Sadly, it is our opinion that they have been met with apathy from the highest levels of the Church hierarchy.” 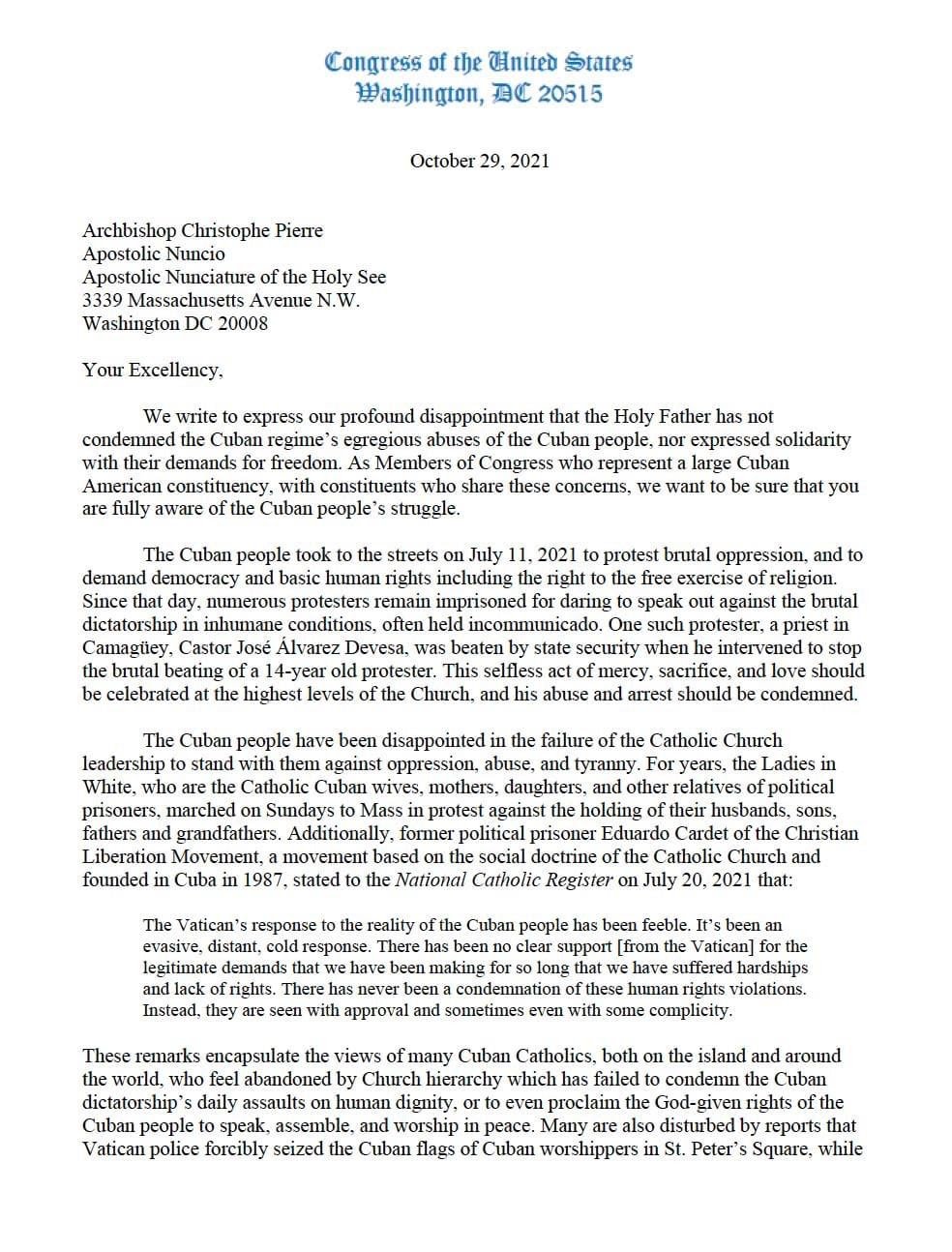 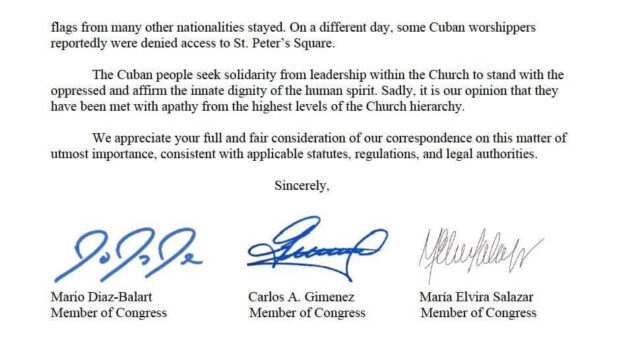