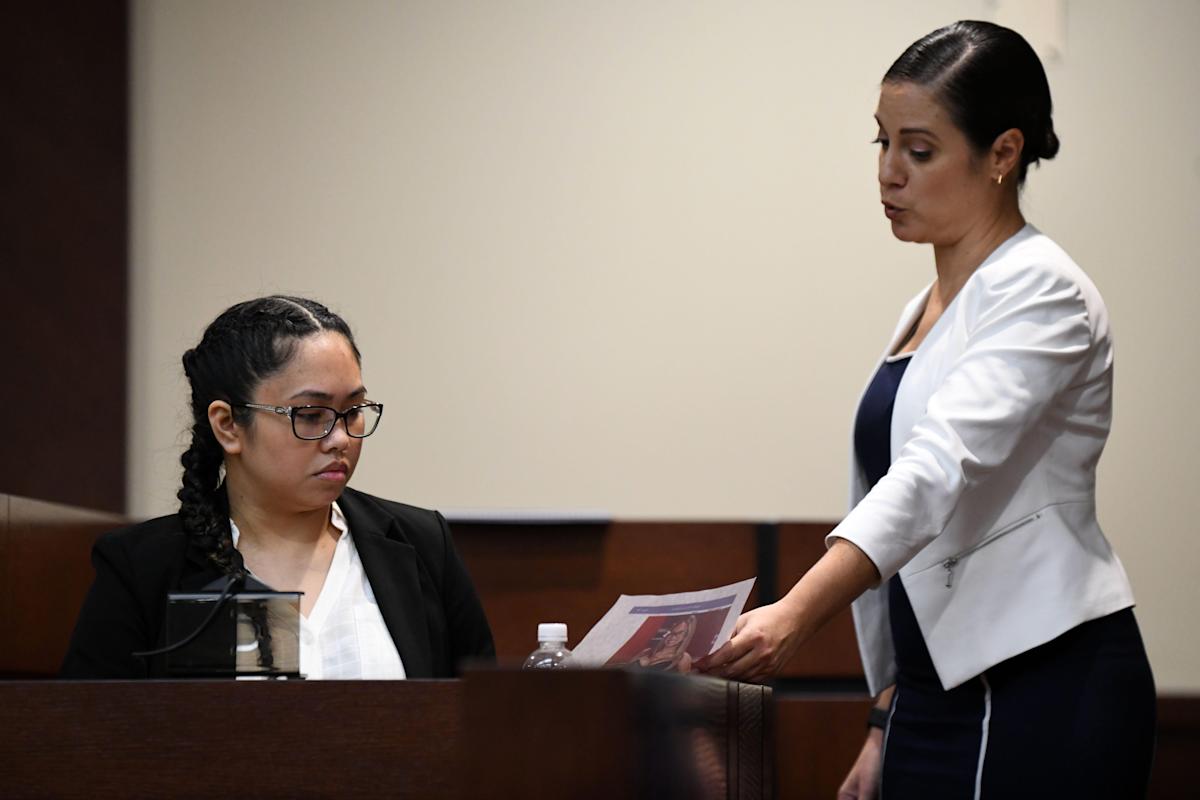 There was a lot more alignment between the two teams than before — at least on a few key things.

It is common for opening statements by prosecutors and defense attorneys to contradict one another, offering competing theories or interpretations about evidence.

During Katherine Magbanua’s 2019 trial for the killing of Dan Markel, when she and co-defendant Sigfredo Garcia were first tried for their alleged roles in this murder-for-hire, opening statements largely matched those patterns.

But during Wednesday morning’s opening arguments in Magbanua’s retrial, there was a lot more alignment between the two teams than before — at least on a few key things.

Some basic but important agreements

Defense attorneys and prosecutors expressed agreement on the following set of facts: Charlie Adelson paid for it, Garcia did it, and Wendi Adelson is protecting her family and herself. They also shared the sentiment that Markel’s murder created a sea of loss for so many, his children in particular.

Assistant State Attorney Sarah Kathryn Dugan began the morning acknowledging the “loving father” that Markel was. So did defense attorney Tara Kawass, saying, “One thing everyone in this courtroom agrees on, Dan Markel lived his life for those two boys.”

More specifically, the two legal teams are aligned on motive. Both sides told the jury how Markel’s ex-wife Wendi was “desperate” to relocate to Miami with the couple’s young boys following their divorce, and that she and her mother Donna Adelson were upset by a court motion Markel filed that would have removed Donna’s ability to have unsupervised visits with the children due to disparaging remarks she had made about him to them. While neither lawyer mentioned Markel had also written motions alleging financial wrongdoing by Wendi in their divorce — a serious allegation that could have had consequences for her law license — acrimony such as that may have also contributed to the family’s motive to “take care of the problem.”

The state and defense also agree that Charlie paid for Markel’s murder, noting his peculiar habit of stapling money, and Wendi’s admission to multiple people including law enforcement that Charlie had mentioned hiring a hitman before the murder.

Finally, there appears to be an agreement between teams about Wendi herself. Dugan referred to Wendi’s motive to relocate to Miami, and Kawass spoke of the same. Dugan shared how Wendi achieved this desired move to South Florida only days after the murder and quickly changed the children’s last name from Markel to Adelson. “Just like that,” Dugan said, “their father was effectively erased from their lives.”

Kawass asserted that Charlie and Garcia alike manipulated Magbanua, and that both men got what they wanted from her. “More importantly,” Kawass ended, “Wendi got what she wanted.”

But then, theories diverge, and the defense shows strain

While not captured on livestream video, courtroom viewers noticed Kawass shaking her head “no” repeatedly throughout Dugan’s opening statements, and rolling her eyes, sometimes mouth agape. Her co-counsel Christopher DeCoste was overheard nudging and coaching Kawass to raise objections while Dugan was speaking, but the few times Kawass did, Judge Robert Wheeler overruled her. Kawass’ demeanor did reflect passion, even if not professionalism.

That temperament was maintained in Kawass’ opening statement, where she presented the defense’s theory of the case. In short, Kawass contends that Charlie and Garcia orchestrated Markel’s murder behind Magbanua’s back, using her as a “toy” or pawn to achieve their separate goals. For his part, Kawass contends, Charlie wanted Markel dead, and for Garcia’s part, he wanted Charlie to stop dating Magbanua so they could reunite their family.

Kawass said she would prove this theory based in part on Charlie “ghosting” Katie after the murder and Garcia moving back in shortly afterward, although these patterns may be contested with actual data.

More confounding, Kawass told jurors that the only reason Magbanua is “sitting here today” is that the FBI decided to place her name in the middle of the conspiracy after learning she was a common contact of both the Adelson family and Garcia.

They’ve been “pushing this theory” for eight years, Kawass said, arguing that if the FBI hadn’t “planted” Katie’s name during an undercover bump operation, all subsequent conversations between conspirators would have gone differently.

Kawass’ theory and performance were on par with mainstream crime drama, but to prosecutors, implausible.

For example, Kawass’ contention the FBI somehow manipulated Magbanua’s involvement is easily contested by the series of events that took place during and after the “bump.” The undercover FBI agent did say Magbanua’s name to Donna, but this was not repeated when Donna called Charlie immediately after. Donna simply referred to “an ex-girlfriend” when speaking with her bachelor son in a highly coded conversation intercepted by wiretap.

Dugan told the jury they’d get to hear these wiretaps themselves — but that Charlie never asked Donna, “Whose ex? Which ex?” Nevertheless, Magbanua was the only ex-girlfriend he reached out to afterward.

Dugan was decisive, calm, and clear in outlining the “two paths” of investigation that ultimately both led back to Magbanua. The first path, she said, was based on Dan Markel’s personal life and the hunt for a motive — leading from Adelson family members to their various connections.

The second path, Dugan shared, was the light-colored Prius Markel’s neighbor witnessed driving away from the crime scene. Extensive tracking through SunPass data, rental agreements, bus videos, phone records, and more, identified the car as the one Garcia and Luis Rivera used to stalk Markel and then return to South Florida.

Dugan previewed for the jury some of the evidence they would see in the coming days. She referred to how Magbanua’s GPS records place her near Charlie’s house the night of the murder and then at Rivera’s home the next day — consistent with how and when Rivera confessed the money was transferred in his plea deal. She shared how phone records confirm the first call placed by the hitmen after the murder was to Magbanua’s phone — also consistent with Rivera’s confession. And Dugan prepared the jury for hearing extensive evidence that the lines of communication between conspirators were consistent leading up to the murder and after the FBI bump, with information tracking from Donna to Charlie, then Charlie to Magbanua, then Magbanua to Garcia, and back again.

“Evidence will show that both of these paths led to this defendant,” Dugan said. “Two investigations, one conclusion.”

A heartbreaking crime scene, and an unflappable detective

The first set of witnesses included Markel’s neighbor who had heard the gunshots and discovered him unresponsive in his car in his driveway, the crime scene photographer, a forensic video analyst, and the medical examiner who had conducted Markel’s autopsy. These images and accounts went uncontested by defense attorneys.

But the defense raised plenty of objections to the testimony of Craig Isom, a veteran detective who had been with the Tallahassee Police Department for over 28 years. Isom’s presentation was everything one would hope for or expect from a seasoned investigator — steady, solemn, unflappable.

On direct examination by prosecutor Georgia Cappleman, Isom attested to the voluminous, contentious records in the Markel-Adelson divorce and provided jurors with images of the rented Prius as the hitmen stalked Markel on the morning of his killing. DeCoste objected to multiple questions asked of Isom, including the divorce record itself, Isom’s interviews with Luis Rivera, and Magbanua’s arrest. Over defense objections, Isom was permitted to tell the jury that immediately after Magbanua’s arrest and her first permitted phone call, Isom received a call from Charlie’s lawyer, David Oscar Markus.

DeCoste attempted to goad Isom into agreeing with the defense theory of the case, suggesting it was possible to draw a direct line between Garcia and Charlie, but Isom didn’t bite.

“She’s it,” Isom said of Magbanua. “She’s the only connection.”

DeCoste accused Isom of “looking at everything through dirty windows instead of clean windows,” and was chided by Judge Wheeler for being argumentative.

DeCoste’s interactions with Isom seemed to dig the hole deeper for his case. And when Cappleman came back on redirect, a fire had clearly been lit, blowing those holes open even wider.

For example, DeCoste had moved Isom to agree that even after national television coverage on the case had aired, Magbanua went about her “normal life.” But on redirect, Cappleman asked Isom to clarify — at which point he recounted that after attention amplified, Magbanua had in fact left her home and never returned, buying a burner phone to communicate with Garcia.

More pointedly, Cappleman provided the jury with context regarding Magbanua’s paychecks from the Adelson Institute. The defense had tried to coax Isom into admitting Magbanua had done legitimate work for Charlie’s dental practice, pointing to a few text messages and wiretap recordings between them where they referenced contacting “patients.”

But on redirect, Cappleman asked Isom to share his thoughts on whether the co-conspirators were talking about actual patients or using that word as a code with one another. The use of words such as “patients” or “tenants” was common in their conversations, but in context, it suggested to investigators that Adelson and Magbanua suspected they were being listened to and were referencing something else. “Yes,” Isom said, “it appears that’s staged language.”

Even more discrediting to the defense theory, on redirect, was Isom’s clarification of a text exchange between Magbanua and Charlie. DeCoste had indicated to the jury that Magbanua was referencing employment when she told Charlie, “put me on the schedule.” But when Cappleman got back up, Isom clarified that Magbanua was in fact referring to scheduling a wisdom tooth removal in this message.

Finally, Cappleman asked several questions of Isom to undermine the defense claim that Rivera’s confession was scripted by law enforcement and contained only evidence Rivera had read about in prior police reports. Isom shared that much of Rivera’s admission contained fresh information, not content that had been either known or released, and then subsequently corroborated.

Florida Politics is providing daily coverage of Katherine Magbanua’s retrial for the 2014 murder-for-hire of FSU law professor Dan Markel. The case has drawn international media attention to Florida’s capital city, and we’ll share with readers the top things to watch for and discuss as proceedings unfold. Our reporting will draw from many sources, including contributor Karen Cyphers of Sachs Media, who with attorney Jason Solomon advocate with the grassroots group, Justice for Dan, to draw attention to this case and provide analysis of relevance to Florida’s political, advocacy, and legal communities.

nextJoe Henderson: Congrats, we think, to Fentrice Driskell as she tackles a tough job