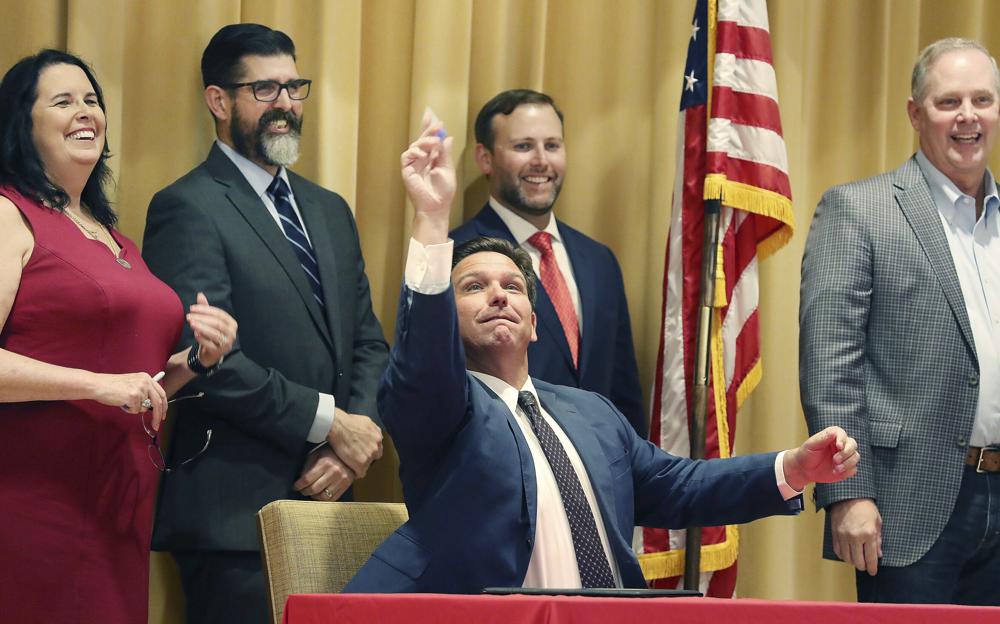 The Governor OK'd six proposals from Republicans and Democrats alike, from measures addressing touching minors inappropriately to others reforming the parole system.

Gov. Ron DeSantis capped off his busy week last week by signing a half dozen bills, including a law that makes it a felony to touch a 16- or 17-year-old in a lewd or lascivious way and other legislation related to sexual misconduct.

It is already a felony to touch someone under 16 in an unwanted, sexual way, and a misdemeanor to do the same to someone aged 16 or 17. On Oct. 1, the measure (SB 444), signed Friday and filed by Gainesville Republican Sen. Keith Perry and St. Pete Beach Republican Rep. Linda Chaney, will increase the latter to a third-degree felony, if committed by someone 24 or older.

The bill received unanimous support in its final passage by both the House and Senate after the House approved an amendment adding that the offender must be 24 or older to be subject to the felony. Third-degree felonies are punishable by up to five years in prison and a fine of up to $5,000.

The earlier language had thwarted prosecutors in some cases that did not involve actual vaginal penetration. Individual courts in Florida had come up with their own definitions to determine what counts as sexual assault.

“There is an issue in current statute where a woman’s genitals are defined only as vagina. By replacing the word with the defined term ‘female genitals,’ we establish consistency in statute as well as in arguments in court relating to sexual battery,” Stewart said in a news release in March.

Beginning July 1, the legislation will require the Statewide Council on Human Trafficking to assess the role of social media platforms in facilitating human trafficking in Florida, establish a process to detect that use and make recommendations on how to stop that use. The law will also create training for fire safety inspectors to spot human trafficking.

“These folks are going to be out there going to places that many of us will never be able to go,” Overdorf said in January.

Another measure (SB 752), filed by Panama City Republican Sen. George Gainer and Shalimar Republican Rep. Patt Maney, aims to improve Florida’s probation system and reduce recidivism. People will be able to reduce their probation terms by completing qualifying educational activities, such as earning an associate’s or bachelor’s degree, and for each six-month period they hold a job.

With the Governor’s signature on Friday, the measure is set to take effect July 1. At that time, it will also codify a pandemic-era policy allowing probationers to report remotely to their probation officers.

The legislation received support from the Florida Police Benevolent Association and other groups dedicated to public safety.

“Improving public safety isn’t a partisan issue,” REFORM Alliance CEO Robert Rooks said in a statement Monday. “This new law means more people on probation will pursue education and employment, producing better outcomes for themselves and their families. That will lead to safer and stronger communities for all.”

DeSantis also gave his approval to a measure (HB 749), passed unanimously by the Legislature, that will double the cap on penalties for licensed and unlicensed public adjusters during a declared state of emergency from $10,000 to $20,000, effective immediately. The legislation, filed by Sarasota Republican Sen. Joe Gruters and Newberry Republican Rep. Chuck Clemons, also includes provisions relating to preventing fraud more broadly.

The sixth and final measure (SB 968) signed Friday, filed by Boca Raton Democratic Sen. Tina Polsky and Tampa Democratic Rep. Fentrice Driskell, specifies that certain interests in any retirement fund or account received by a divorcee after his or her divorce are exempt from creditors’ claims. That measure, which also received unanimous legislative support, took effect immediately.

previousCharlie Crist raises another $1M in May