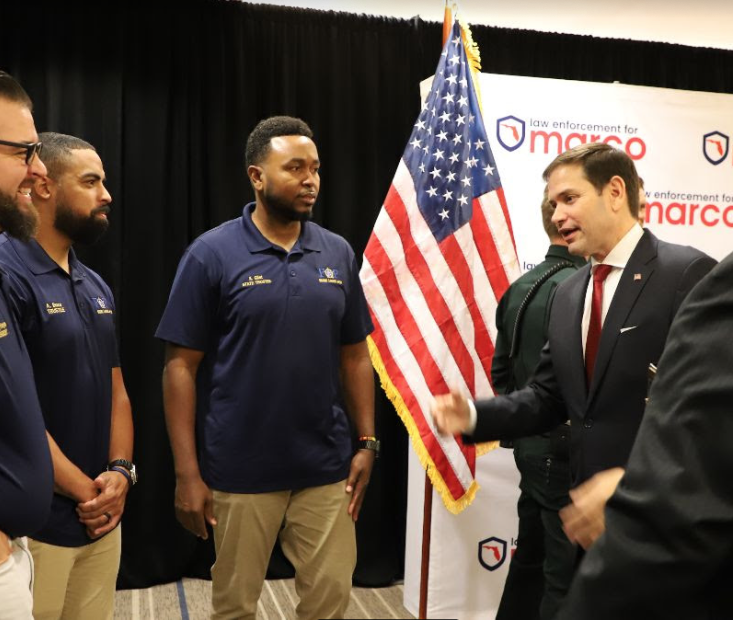 Republican Sen. Marco Rubio landed another blow on Democratic Rep. Val Demings‘s effort to highlight her police background when he announced Friday he’d received the endorsement of the Florida Fraternal Order of Police in their U.S. Senate contest.

The endorsement, made in Demings’ backyard in Lake Buena Vista, is yet another that the Miami Republican has landed from law enforcement ranks. It followed endorsements of the usually more conservative Police Benevolent Association, 55 Florida Sheriffs, and the Florida Police Chiefs Association.

Demings campaign has been running statewide TV ads this week lauding her 27 years as an Orlando cop, including almost four as Orlando Police Chief.

Rubio’s campaign has sought to devalue Demings’ law enforcement background as an asset to her for weeks while Demings has pushed her police background, including with the TV commercial.

The efforts have led to back-and-forth barrages or words.

Rubio’s attempted to tie Demings to the 2020 “defund the police” movement. But that largely failed, as Demings has repeatedly stood against such calls. And she made that opposition the centerpiece to her commercial.

Earlier this week, though, Rubio’s campaign landed a blow with criticisms of Demings’ vote last year on a police reform bill (HR 1280) that included a provision to strip away officers’ qualified immunity from lawsuits.

Demings’ campaign responded  to that with lists of bills supporting police that she has backed, and which Rubio has not backed or has not committed to, including her current VICTIM Act (HR 5768,) written to help police solve gun crimes and murders.

On Friday Rubio was joined by several law enforcement officers supporting him with the latest endorsement.

“This endorsement was a unanimous vote of our members present at our state conference this year,”said Florida FOP President Steve Zona. “Val Demings’ positions change as much as the wind direction changes, while Senator Rubio stands like an oak tree. Val Demings abandoned law enforcement when we needed her most.”

Demings campaign released several of her testimonials in response.

“Knowing Val Demings like I do, for someone to tell me that she wanted to, or she wants to defund the police — I just find that ludicrous,” said Kelly Lowe, Army veteran, former Patrol Service Bureau Aid.

“Val is an extremely honest person. She does what she believes. I don’t think Val Demings will ever change her core beliefs. She’s always going to be a leader, she’s always going to be honest. I don’t have a lot of confidence in the Democratic Party at all, but if there’s anybody within the Democratic Party that I do have confidence in, it’s Val Demings,” he added.