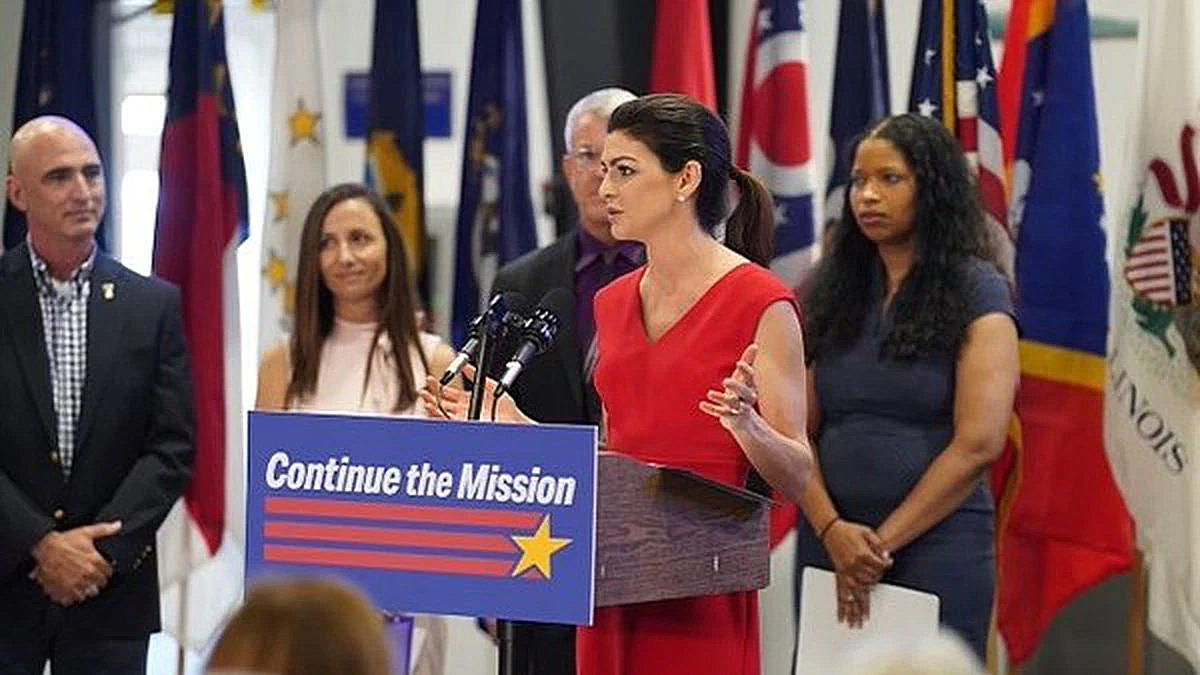 Following a spree of deaths in Gadsden County this Fourth of July weekend, First Lady Casey DeSantis traveled to Quincy with a message of caution against illicit drugs.

DeSantis hosted a roundtable with law enforcement and public health officials Thursday after a four-day period in which medical personnel in the rural county responded to 19 overdoses of fentanyl, a powerful synthetic drug. Officials there have attributed six deaths last weekend to fentanyl overdoses and another three deaths are suspected cases.

“For Gadsden County to have that number in such a short span, we were afraid that we’d wake up in a week’s time and have 30 to 40, 50 people dead,” said County Sheriff Morris Young. “That’s a lot of folks for Gadsden County.”

Young, a Democrat from Quincy, said drugs cross the southern border, make their way to Atlanta, then filter down to southern Georgia and North Florida.

“We have a pyramid, we know a lot of the players who are responsible for spreading this poison, and we are going after them,” he continued.

Officials are providing first responders with naloxone, also known by the brand name Narcan, which reverses the effects of opioids. Naloxone can not only save the lives of people who overdose but the lives of emergency responders who come into contact with opioids.

“Me, for example, I’m not taking any medication, so if I were exposed to something like that, even accidentally — it’s terrifying to think of — but I could die,” Surgeon General Joseph Ladapo said. “It’s one of the reasons why the naloxone distribution and getting the naloxone out to first responders and also areas that are just high risk is important and valuable.”

The overdoses occurred less than two months after Gov. Ron DeSantis signed a law to stiffen penalties on drug dealers (HB 95), which will lessen the burden for prosecutors to seek first-degree murder charges against drug dealers. However, that law will not take effect until October.

Under the upcoming law, which the Republican Governor framed as a response to the rise of fentanyl overdoses, prosecutors will only have to show the drugs were a “substantial factor” in a person’s death.

Originally a pain management treatment for cancer patients, fentanyl is the leading culprit in the ongoing opioid crisis. Illegally produced versions of the drug are up to 100 times more potent than morphine and other opioids. Some reports from the U.S. Drug Enforcement Administration say fentanyl is primarily manufactured in Mexico, while others say the drug comes from China.

Contributing to the lethality of the substance, less-potent drugs have been laced with fentanyl, leading users to unknowingly take deadly doses.

“When we talk about fentanyl, we need to let these kids understand that when they think they’re taking something, quote, ‘safe’ … but it’s being laced with fentanyl, it’s fatal,” the First Lady said. “We have to make sure that these kids see that firsthand by producing really compelling videos and delivering it right to their mobile devices where they’re watching.”

With the COVID-19 pandemic, substance abuse has been on the rise. For the first time, the U.S. Centers for Disease Control and Prevention reported that more than 100,000 Americans died of drug overdoses over a 12-month period. About two-thirds of the deaths were linked to fentanyl and other synthetic drugs.

The overdoses in Gadsden County aren’t the first high-profile case of overdoses in Florida this year. In March, five West Point cadets overdosed on fentanyl-laced cocaine during spring break in Wilton Manors, putting the dangers and pervasiveness of the fentanyl crisis back in the national spotlight. The overdoses happened on the penultimate regularly scheduled day of this year’s Legislative Session, providing a sense of urgency to lawmakers as they hammered out the final details of the bill.

Despite the heightened awareness, the Republican-led Legislature did not decriminalize the possession of fentanyl test strips. Fentanyl test strips are used to test illicit drugs for fentanyl, but they are considered drug paraphernalia under Florida law.