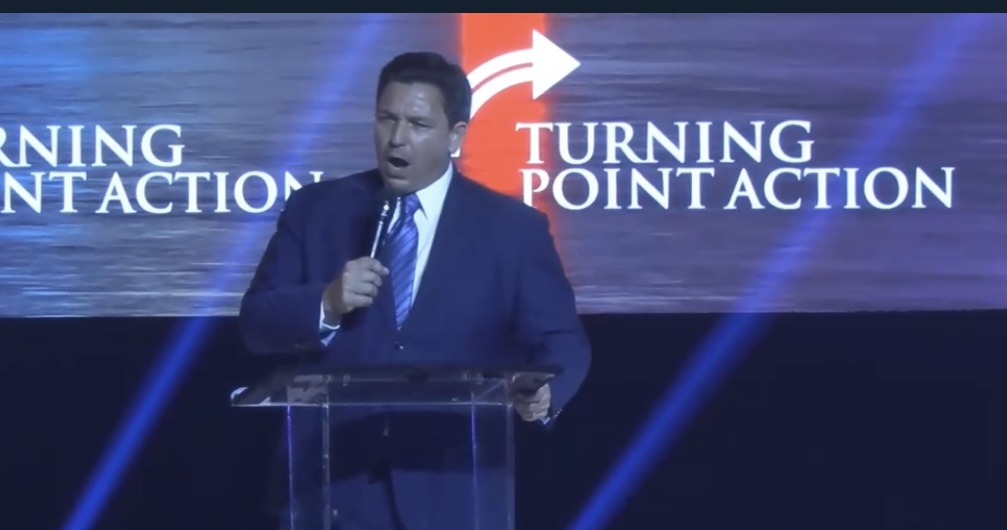 "The country is better off for what we did."

In Tampa Friday, Gov. Ron DeSantis offered yet another headlining speech in a season full of them.

The Governor, making the keynote speech for Turning Point USA kickoff, was introduced as “America’s Greatest Governor,” and he introduced attendees to America’s “beachhead of freedom.”

From there, an introductory round of the greatest hits: DeSantis reviewed rejected mandates for “COVID jabs,” rehashed disses of “Brandon” and Dr. Anthony Fauci, and recycled other reminders of the state’s Biden-era battle against coronavirus mandates.

“If not for Florida, the lockdowners would have won,” DeSantis said. “The country is better off for what we did.”

“End of quote. Repeat the line,” DeSantis said, mocking the President as “looking like a deer in the headlights” when reading from the teleprompter.

The jokes weren’t done regarding Biden and his issues, meanwhile.

DeSantis predicted a “red wave,” then urged Republicans to “do something with those majorities,” as part of an extended rant about Biden’s border policies and violent crime, including the “attempted assassination” of Lee Zeldin, a Republican running for Governor of New York who was assaulted this week while giving a speech.

“It’s destroying these societies. Because the inmates are running the asylum,” DeSantis decried, setting up a contrast with the law and order state of Florida.

“Woke ideology” and critical race theory also came up, as part of the Governor’s ongoing war with the educational establishment.

“They want to use CRT to distort American history,” DeSantis contended, to “replace it with their leftist ideology.”

The Governor also decried “woke math,” recalling the state’s struggle with math books that incorporated principles of social emotional learning and other such affective concepts.

“There’s a right answer here,” he said. “And it’s not about injecting ideology into concepts like math.”

Happily, the state now has “normal math books” and is “winning.”

Despite that win, DeSantis cautioned that said “woke ideology” is prevailing in Big Tech and other American institutions, including the military.

“Now what’s going on, the military can’t recruit. The recruiting has gone to the basement,” DeSantis said, because “the recruits know the leadership has lost its way” and “would rather be talking about pronouns than winning wars.”

“If you are willing to stand up and speak the truth, it is very difficult in this day and age to do it,” DeSantis said, warning about a “blizzard of lies” and a need for “true north” leadership, such as that he’s provided in Florida.

“I have not since I have been Governor taken a single poll,” DeSantis claimed, not for the first time.

“What we’ve done in Florida is lead with conviction,” DeSantis added, saying that he was “strategic” with it.

“The goal is not to virtue signal with your agenda,” DeSantis said. “It’s to put the ball in the end zone.”

While the “left” will continue to attack conservatives, DeSantis urged them to “get ready for battle.”

“Put on the full armor of God,” DeSantis said. “You will face flaming arrows. But the shield of faith will protect you.”