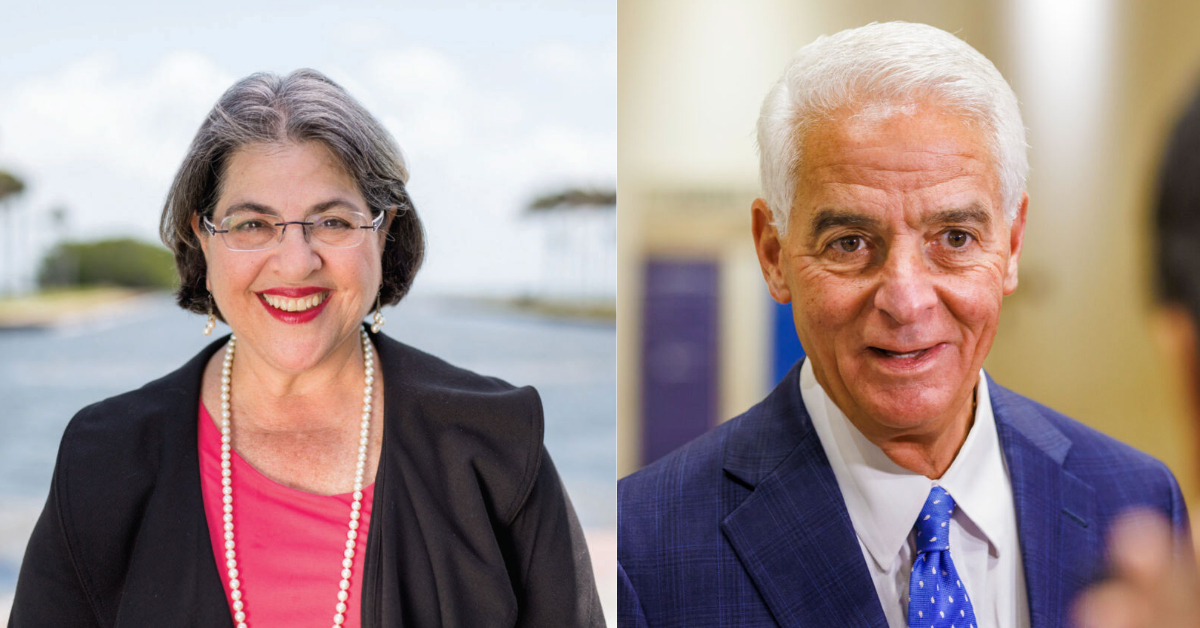 ‘He'll do what's best for Floridians, not just the politics of the day.'

At a 5 p.m. gathering at Gramps in Miami’s Wynwood neighborhood, Levine Cava announced her endorsement of Crist, whom she called an “absolute fighter for Floridians … especially those that call Miami-Dade home.”

“Charlie is exactly who we need to address Florida’s affordability and housing emergency, combat the rising climate crisis, and unite our great state against divisive politics our current Governor continues to inflame,” she said in a statement ahead of the event, which Crist attended.

She called Crist “the leader this moment calls for.”

“There is only one person in the race for Florida Governor that not only has a track record of facing these challenges head-on, but he is the best candidate to unite our state and beat Ron DeSantis,” she told the crowd.

“Charlie led our state during the 2008 recession, and he did it while saving the jobs of thousands of teachers and keeping firefighters… He’s tackled the crises facing our state before, and as Florida’s next Governor, he will do it again.

“He is our trusted voice across the state. Floridians know him for his kindness, for his compassion, and for his willingness to work across the aisle. He’ll do what’s best for Floridians, not just the politics of the day. We know that and we love that about him, and that is exactly who we need in Florida right now to end this divisive political gamesmanship and usher in decency and fairness in Tallahassee.”

Other noteworthy local Democrats attended the event but didn’t speak, including state Rep. Kevin Chambliss and Raquel Pacheco, who is running to unseat Republican Sen. Ileana Garcia in Senate District 36.

Geller spoke directly to DeSantis, who he said is neither “the king of Florida” nor America’s next President.

“You were elected to be a public servant,” he said. “You are not elected to ignore the will of the people who vote in this state. Come November, they’re going to stand up, all of us, and show you.”

Levine Cava’s Tuesday endorsement joins close to 200 others from unions, advocacy organizations and current and formerly elected officials from Florida and across the country, including recent nods from Chambliss, Miami state Sen. Jason Pizzo and Broward School Board Member Jennifer Jenkins.

In terms of fundraising, endorsements and polling, Crist has emerged as the front-runner in a four-way Democratic Primary.

The former Republican’s main opponent in that contest is Agriculture Commissioner Nikki Fried, who in recent weeks has attacked Crist on his record, including his appointment of a conservative Justice to the Florida Supreme Court and assertions he continues to make that he is “pro-life.”

Crist, who holds a 100% rating from the Planned Parenthood Action Fund and a 0% rating from National Right to Life, has said that while he’s “for life” in general, he supports “a woman’s right to choose and make her own decisions about her body.”

He has vowed, upon winning the governorship, to veto all future bills the Florida Legislature passes until state lawmakers rescind Florida’s new ban on abortion after 15 weeks of pregnancy.

With regard to South Florida, Crist has unveiled several initiatives his campaign argues will benefit the area. That includes plans to lower property insurance costs and counteract the region’s housing affordability problem, legislation to curb gun violence, and a goal to outfit a million homes with solar rooftops.

Crist said he is honored to be backed by Levine Cava, whom he called “a true champion for the people of Miami-Dade.” He then aimed at DeSantis, who he said is too preoccupied with partisan pettiness to focus on the needs of the more than 21 million people who live in the Sunshine State.

“We’ve got a big task ahead. We have a Governor that doesn’t really care about people, and it breaks my heart to say that,” he said.

That sense of compassion, he said, is what’s missing from the current state leadership.

“(There’s) a rule that I was raised on. It’s called the golden rule: ‘Do unto others as you would have done unto you.’ If we all live by that a lot of these problems will go away,” he said.

“I don’t know if Gov. DeSantis ever learned the golden rule, but if he did, he certainly forgot it, because he doesn’t pay attention to LGBTQ. He doesn’t stand up for women and their right to choose. He doesn’t care about African American voters and their ability to get their vote. … It almost seems like he goes to bed every night thinking about, ‘What group can I beat up on tomorrow?’

“He is a divider, and he’s tearing our state apart. I’m a uniter and I want to bring our Florida together.”

Early voting for the Aug. 23 Primary Election is underway in Miami-Dade County. The General Election is on Nov. 8.