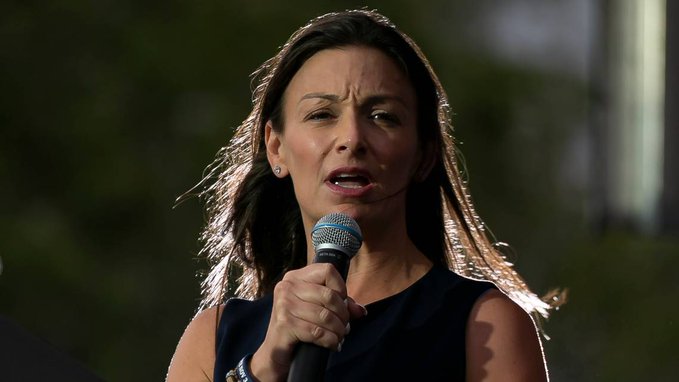 ‘Her comments were so insensitive, just to play on culture wars, to back up an egregious policy.’

At a Monday press conference in Miami’s Little Havana neighborhood, Fried again took aim at Nuñez, whom she castigated this past weekend shortly after the clip from Spanish-language radio station WURN made its rounds on Twitter.

“What she said was so cruel,” Fried said.

“She needs to either resign, apologize, and certainly our Governor needs to condemn these actions and those comments,” Fried added. “We know so many people who have left communist countries and tyranny to come here to Florida and to America for democracy, for a quality way of life. And her comments were so insensitive, just to play on culture wars, to back up an egregious policy.”

Ron DeSantis needs to condemn his Lieutenant Governor’s threat to bus Cuban refugees to Delaware — or ask for her resignation. pic.twitter.com/P2PdcfQTdy

Nuñez, the daughter of a Cuban exile, stopped just short of saying in her interview Friday that Cuban migrants would be specifically targeted under a supposed immigrant-relocation plan Gov. Ron DeSantis’ administration is considering. But she more than hinted at it, noting that the destination she and DeSantis have in mind is President Joe Biden’s home state.

“Those numbers have come through the border from Cuba, and you can be completely sure that where they want to end up, where they want to arrive is Florida. There is no doubt about it,” Nuñez said. “The state has no jurisdiction over the issue of migration, but we have jurisdiction over the welfare of our residents, of our communities. And therefore, the Governor worked with the Legislature to secure funds to ensure that people who come (here) illegally — he, again, won’t remain with crossed arms. He will not be thinking about, ‘What is he going to do?’

Wildly inappropriate words from Ron DeSantis’ LG. Fleeing communism and tyranny to a state rich with family and culture only to be deported north by bus is cruel and wrong. https://t.co/Mhg9KBwqG5

Fried, who is running for Governor, was quick to seize on Nuñez’s comments Saturday, calling them “wildly inappropriate,” “cruel and wrong.”

Others soon joined in, including Fried’s opponent in the Democratic Primary, U.S. Rep. Charlie Crist, who said the DeSantis administration is playing “political games” using immigrants as “pawns … to curry favor with the extremist base of the Republican Party.”

If Fried honestly expects DeSantis to condemn Nuñez, she shouldn’t hold her breath. The Governor has increasingly used the undocumented immigration as a wedge issue since taking office, including deploying Florida law enforcement officers to the Mexican border and a $12 million budget earmark to remove immigrants from Florida.

During Florida’s 2018 Governor’s race, which he won by less than half a percentage point, DeSantis ran a campaign video in which he playfully tells his toddler daughter to “build the wall,” a reference to Donald Trump’s plan to construct a contiguous barrier across America’s southern border.

DeSantis, whose win in 2018 many attribute to an endorsement from Trump — including Trump himself — now leads the former President in some polling for the 2024 election.

Of an estimated 2.3 million Hispanics of Cuban origin living in the United States, two-thirds resided in Florida as of 2017, according to the Pew Research Center. Cubans are also the largest immigrant group in the state. More than half are foreign-born, and most reside in Miami-Dade, Nuñez and Fried’s home county and the site of many demonstrations over the years calling for Cuba’s liberation.

As comments criticizing the Lieutenant Governor piled up on Saturday, Nuñez’s senior adviser, Nikki Whiting, said on Twitter that Fried was errantly conflating “two different things: the influx of Cubans at the border and the Governor’s attempt to tackle Biden’s reckless border policies.”

In a follow-up comment, Whiting suggested Fried had confused “refugees with illegal immigrants.”

So how do you and your team confuse refugees with illegal immigrants?

DeSantis’ former Press Secretary, Christina Pushaw, who now works on his re-election campaign, made a similar argument. She said Nuñez “clearly said those who come illegally should be transported out of Florida, no matter where they came from.”

She added, “If someone came to Miami on a raft from Cuba to escape communist repression, that person is legal (because they are a) refugee. This isn’t hard to understand.”

.@LtGovNunez clearly said that those who come illegally should be transported out of Florida, no matter where they came from.

If someone came to Miami on a raft from Cuba to escape communist repression, that person is legal bc refugee.

This isn’t hard to understand. https://t.co/QWOCcCOzsY

Pushaw did not mention that a person must take many arduous steps to be granted refugee status, including demonstrating to the U.S. government that they were persecuted or in fear of persecution and receiving a referral to the U.S. Refugee Admission Program to begin their process of acceptance.

Nor did she mention that refugees and immigrants often avoid government interaction out of fear of imprisonment and deportation, an issue to which many attribute Florida’s population undercount in the 2020 Census.

Fried said Monday that while the U.S. immigration policy needs an overhaul, the plan Nuñez described is more harmful than helpful.

“(There) needs to be, of course, national attention on immigration reform,” she said. “But that’s not what she’s doing. She says that she wants to, with the Governor, bus people out of the state of Florida to Delaware. That shows it’s a culture divide and not something that’s about humane (solutions).”

previousDaniel Davis wants to be Jacksonville Mayor without going all-in