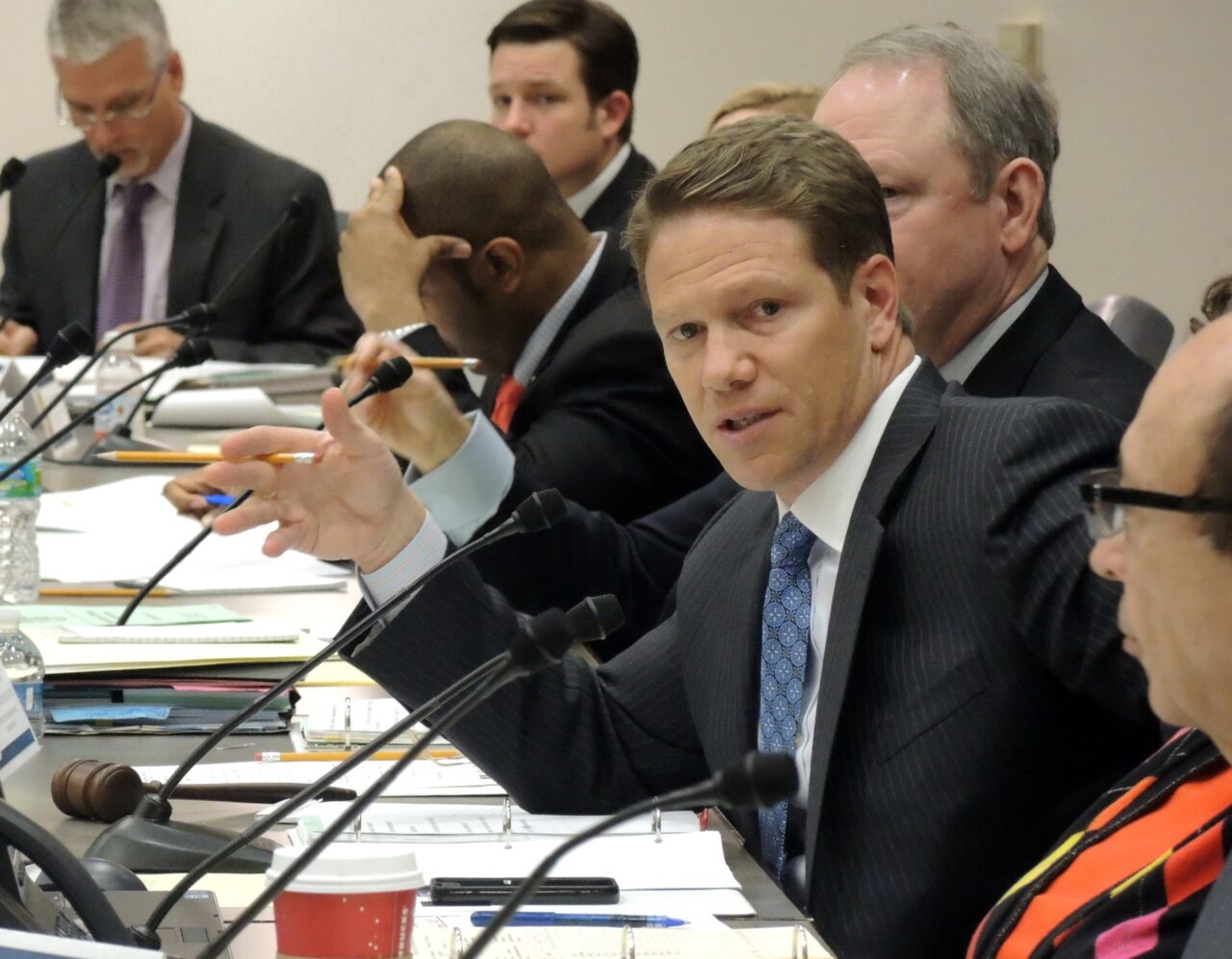 He wants a guarantee he can remain Jax Chamber president if he loses.

Davis, a Republican, has not entered the race to succeed term-limited Mayor Lenny Curry, but he has been raising a lot of money through his political committee and he’s polling ahead of many official candidates.

Insiders of Jacksonville politics are acutely aware that Davis has been angling to run for Mayor for decades. He’s told people he’s wanted the top job at city hall since childhood.

In the infancy of his state political tenure, his ambition was on full display when he waged an ultimately unsuccessful bid for House Speaker. With the top job in the Legislature no longer an option, he quit and decided not to run for re-election.

It was a black eye for Davis, and it’s one he hopes to avoid repeating when he runs for Mayor — which is not a question of if, but when.

According to members of the Jacksonville Chamber board who spoke to Florida Politics on the condition of anonymity, Davis is hoping to negotiate a win-win with his employer.

When he launches his campaign, he hopes to continue receiving his $536,000-a-year salary despite devoting most of his time to the campaign. And, if he loses the election, he wants a guarantee that he will be able to return to the position.

According to those familiar with the negotiations, Davis will likely get what he wants because the people who have the authority to authorize such an agreement — the Jacksonville Chamber’s executive committee — are a small group of people who have strong political and professional ties to Davis.

Many board members are up in arms. However, they have little power to stop such a deal if it’s struck. One board member told Florida Politics that a board seat is a “pay-to-play” honor with no tangible authority.

Their concerns have little to do with Davis. One board member told Florida Politics he considers Davis a close friend and would likely vote for Davis if he runs. But providing Davis the guarantees put a lot of pressure on the Jacksonville Chamber’s budget and potentially jeopardize its tax designation.

The Jacksonville Chamber, like many state and local chambers of commerce, is a nonprofit organized as a 501(c)6.

According to a tax attorney who specializes in 501(c)6 organizations and spoke to Florida Politics on background, the Jacksonville Chamber of Commerce would not necessarily be jeopardizing its tax-exempt status if it continued to pay Davis’ salary if he runs for Jacksonville Mayor, but the threat is real.

The attorney said 501(c)6 rules provide broad leeway for what is considered justifiable compensation. The National Football League, for instance, was classified as a 501(c)6 from its inception until the mid-2010s and according to a review of its historical Form 990 filings, its employees and officers were generally paid more than people in comparable positions at non-tax-exempt organizations.

However, if Davis’ work responsibilities are altered to allow him to devote more time to a mayoral campaign without a commensurate salary reduction, the Jacksonville Chamber’s finances could face heightened scrutiny.

A recent funding request the Jacksonville Chamber submitted to City Council indicates it may be on that track. The Chamber has received between $400,000 and $450,000 in City funding for the past several fiscal years, but its request for the 2022-23 budget year is $750,000.

There is speculation that the funding would be used to secure additional staff members who would take over some of Davis’ duties while he campaigns. Florida Politics reached out to a Jacksonville Chamber executive committee member to ask about the funding request and negotiations with Davis but did not receive a response.

If the city dollars were used in part to hire an additional executive who would serve as the Chamber’s president in all but title during Davis’ mayoral campaign, the deal would be even more likely to threaten the organization’s nonprofit status.

Board members also worry about how the Jacksonville Chamber could move forward if Davis returns to the job after a losing campaign.

If Davis were to go negative in the race — another near certainty — it could kneecap the Chamber’s ability to work with whatever administration ultimately succeeds Curry’s. Though board members who spoke to Florida Politics said they thought Davis was currently doing a good job as president, they believe that the political ramifications could severely damage the Chamber’s effectiveness.

A survey of the current political climate indicates why Davis is working so forcefully to engineer a deal that will provide no benefit to the Chamber and only benefit Davis if he loses.

At the beginning of last year, before any filed or prospective candidate reported a single penny, Davis sent a cautionary message to would-be challengers, posting $1.3 million in his then 8-year-old Building a Better Economy political committee.

The vast majority of that cash came from donors who heavily backed Curry in his two campaigns. He’s since gone on to raise even more money from the very same people. Donors such as Tom Petway, J.B. Coxwell, and Ed Burr, all breaking the bank to elect Lenny Curry, have ponied up hundreds of thousands to bring the formerly Westside, now Ortega, Republican back to City Hall, but this time in the Mayor’s chair. And many of these donors were the loudest supporters of privatizing JEA, the municipal-owned utility.

And to keep the trend going, Davis hired the very same consultant Curry employed as both a candidate and sitting Mayor, lending credence to the thought that Davis’ bid is a Curry legacy play. Since he began fundraising, Davis has made multiple payments to Tim Baker’s Data Targeting for research and advertising. The “third” Lenny Curry term strategy was starting to take shape.

Baker is the epicenter of Curry’s political operation, having consulted for the term-limited executive since the early days of his 2015 campaign. And his scope of work wasn’t just helping the Mayor win his elections. He also ran both Curry-endorsed sales tax referendums.

But even after three tax hikes, an overhaul of the city’s after-school programs, and finalizing some long-standing downtown projects, a recent poll shows 61% of the city’s voters want change.

Davis spent Curry’s entire mayoral tenure locking up the perceived necessities to win next year, but as 2021 progressed, the once-considered rock-solid foundation of a soon-to-be coronation began to experience some cracks. Those cracks came in the form of stronger-than-expected challengers.

On the Democratic side, former newscaster and philanthropist Donna Deegan announced her candidacy after failing to oust Republican U.S. Rep. John Rutherford two years ago. She’s struggled to raise much money, but her notoriety can overcome her weakness on that front. Deegan is widely known in Jacksonville, having anchored local news for over a decade. She’s also related to the late Mayor Tommy Hazouri, giving her a similar legacy play for the mayorship as Davis.

Jacksonville Sen. Audrey Gibson has also recently filed. While some consider her candidacy a foil to Deegan’s, Gibson led Senate Democrats and raised over $100,000 in her first fundraising report. Her weakness is that only four donors have contributed to her political campaign, which doesn’t convey a breadth of support. But a Black Democrat who has been on ballots in Jacksonville for two decades shouldn’t be counted out so quickly.

But where Davis likely feels the bulk of his frustration is with Council Member LeAnna Cumber. A political newcomer, Cumber was first elected to the City Council in 2019 and has been a staunchly conservative voice in the legislative body. Fighting against Curry’s tax hikes, Cumber displayed independence from the Curry/Baker machine rarely seen on the Council. Cumber also vehemently opposed the Jacksonville Chamber-endorsed doubling of the gas tax.

Cumber opened a political committee in September 2021, bringing in nearly $1 million in its first month. She filed as an official candidate seven months later. Her $2.9 million in contributions, compounded by a series of defining moments, has cast a shadow on the aura of Davis’ inevitability.

First, beloved Council Member and Jacksonville political legacy Matt Carlucci dropped his bid for Mayor. Carlucci had been in the race since February 2021, a month after Davis began actively fundraising. He raised roughly $1 million before the well dried up and he felt the need to fold his tent. His withdrawal created an opportunity for Cumber to compete one-on-one with Davis.

Second, at the time of this writing, Cumber has experienced an influx of endorsements from popular elected officials who have worked alongside Davis but are now seeking change in the city’s political establishment.

As was first reported by Florida Politics, Property Appraiser Jerry Holland and Council Member Randy DeFoor, who represents Davis on the City Council, both threw their hats in with Cumber. This may indicate Republican officials are just as amenable to a change in directions as voters were in the aforementioned poll.

That’s fueled a strategy that a Chamber board member described as “playing not to lose,” with the insinuation that by doing so Davis had seemingly accepted the outcome.

Whether Davis is shaken or not, few could blame him for seeking the deal as an insurance policy. Davis makes more money than every chamber executive in the state, notwithstanding the region’s less-than-impressive growth compared to that of Tampa, Orlando or Miami.

Why jeopardize such a lucrative career for what’s seemingly becoming a likely onslaught of community scrutiny? The forthcoming campaign can’t be what he envisioned for the many years he’s dreamed of being Mayor. The sins of his benefactors, his consultants, and whom he hopes to be his predecessor won’t be easy to brush away, either — voters will insist on knowing why he chooses to keep them around.

As it stands, the race in Jacksonville is wide open. To think anything else would show the same naiveté Bill McCollum and Adam Putnam supporters demonstrated in the months preceding their campaigns.

Davis has a steep hill to climb, and his odds are uncertain. But his desire for a hedge shows an unwillingness to bet on himself.

nextNikki Fried: Jeanette Nuñez should apologize or resign for comments on immigrants from Cuba