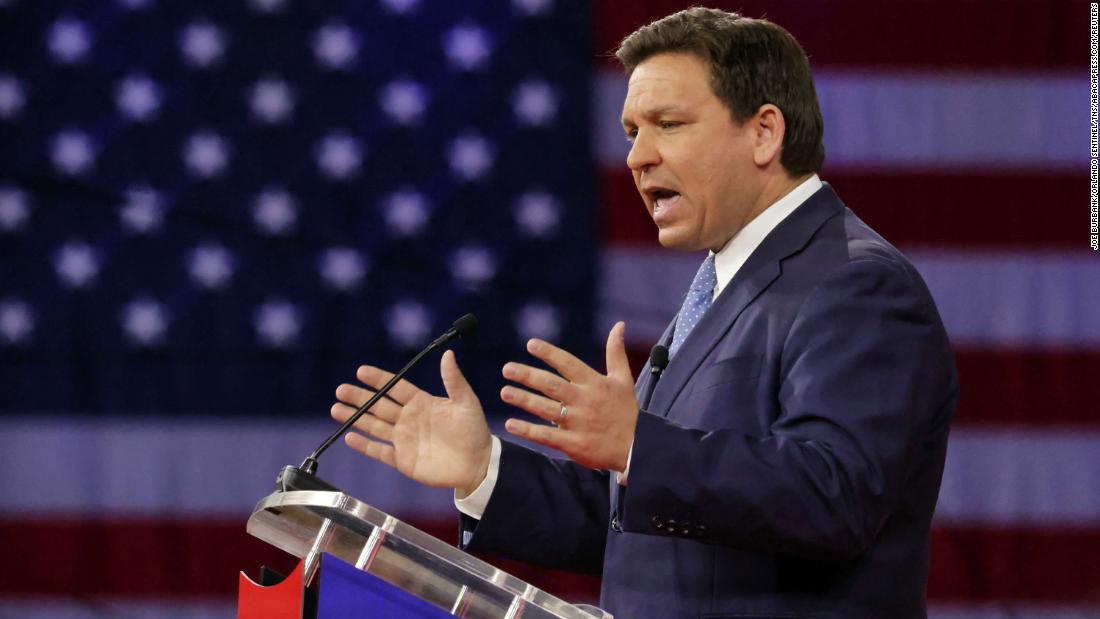 ‘We are not afraid to buck the discredited ruling class and elites in this country.’

In his hour-long keynote speech capping the end of day one at the National Conservative Conference in Aventura, Gov. Ron DeSantis played his greatest hits — and then some.

He moved with aplomb, from slamming President Joe Biden’s immigration policy and doubling down on a promise to bus undocumented migrants from Florida to Delaware, to touting his “anti-woke” policies and how he largely flouted federally recommended pandemic guidelines.

“Just because the media and the elites are saying to do something, that doesn’t mean it’s the right thing to do,” he said. “We are not afraid to buck the discredited ruling class and elites in this country. We did it during COVID, but we’ve done it time and time again across the board.”

DeSantis hit the stage at around 8 p.m. Sunday at the J.W. Marriott Turnberry Resort & Spa to a rock star’s reception, receiving multiple standing ovations from a crowd of hundreds. Staff from the event told Florida Politics the event had more than 1,000 attendees over its three-day run, the most ever.

His remarks were scripted in parts and off-the-cuff in others, though to most frequent Florida news aficionados, little of it was new.

Far from sounding like a campaign speech — he made no mention of his Democratic gubernatorial opponent, Charlie Crist — DeSantis’ delivery was more akin to a State of the State address.

He discussed Florida’s surge in registered Republican voters, noting that when he won the governorship in 2018 that there were close to 300,000 more registered Democrats in Florida than Republicans.

He celebrated Florida’s record $22 billion surplus, which his administration announced in June, bolstered by a 24% year-over-year increase in general revenue collections. The Governor attributed much of that to his COVID-19 response, ban on vaccine passports and mask mandates.

“If you look at what they were trying to do with the forcing of masks and passports and all these different things, this country would look a lot different right now if people like me (had not) stood up and said, ‘Not on my watch,’” he said.

Florida will remain a law-and-order state for as long as he keeps office, DeSantis said, and that counts for both criminals and those whose job it is to keep them accountable. While other states like Illinois are ending cash bail systems and employing other criminal justice reforms backed by billionaire donors like George Soros — whom DeSantis called out by name — Florida will tolerate no such actions, he said.

“People who are engaged in rioting, looting, mob violence,” he said, “if you do that in the state of Florida, don’t expect the Portland treatment.”

Like the man whose endorsement all but handed him the keys to the Governor’s Mansion, DeSantis spoke repeatedly of his readiness to fire those unwilling or incapable of doing their jobs.

He alluded to his recent suspension of Hillsborough County State Attorney Andrew Warren, who attracted headlines, and DeSantis’ ire, for proclaiming he would not enforce Florida’s new ban on abortion after 15 weeks of pregnancy.

“Through nonenforcement, they are trying to reimagine what the justice system is,” he said. “Nobody voted for those changes in the Legislature. They’re just taking it upon themselves to do it.”

In the last two years, his guidance over legislative policy has led so-called “ballot harvesting” to become a third-degree felony. Voters must now provide identification when requesting an absentee ballot. And the state has banned mass mail-outs of vote-by-mail ballots.

“We’re not going to send millions of ballots into the ether not knowing where the hell they’re going,” he said.

Hot-button cultural issues like critical race theory and transgenderism also got time and feedback from the audience, which applauded at the mention of the Stop WOKE Act and the Parental Rights in Education law.

Irreversible sex-change operations should not be allowed on people too young to get tattoos, he said, and to that end, the Board of Medicine will soon impose a new rule banning such practices on minors.

All those things are symptoms of the “woke mind virus” coming from far-left progressives, according to DeSantis, whose outlooks he characterized as “ideology run amok.”

“The Left is playing for keeps,” he warned attendees near the end of his speech. “This is not an easy fight because they have so much support across the commanding heights of society. It requires that, yes, we use common sense and yes, we understand the issues and (are) correct on those.