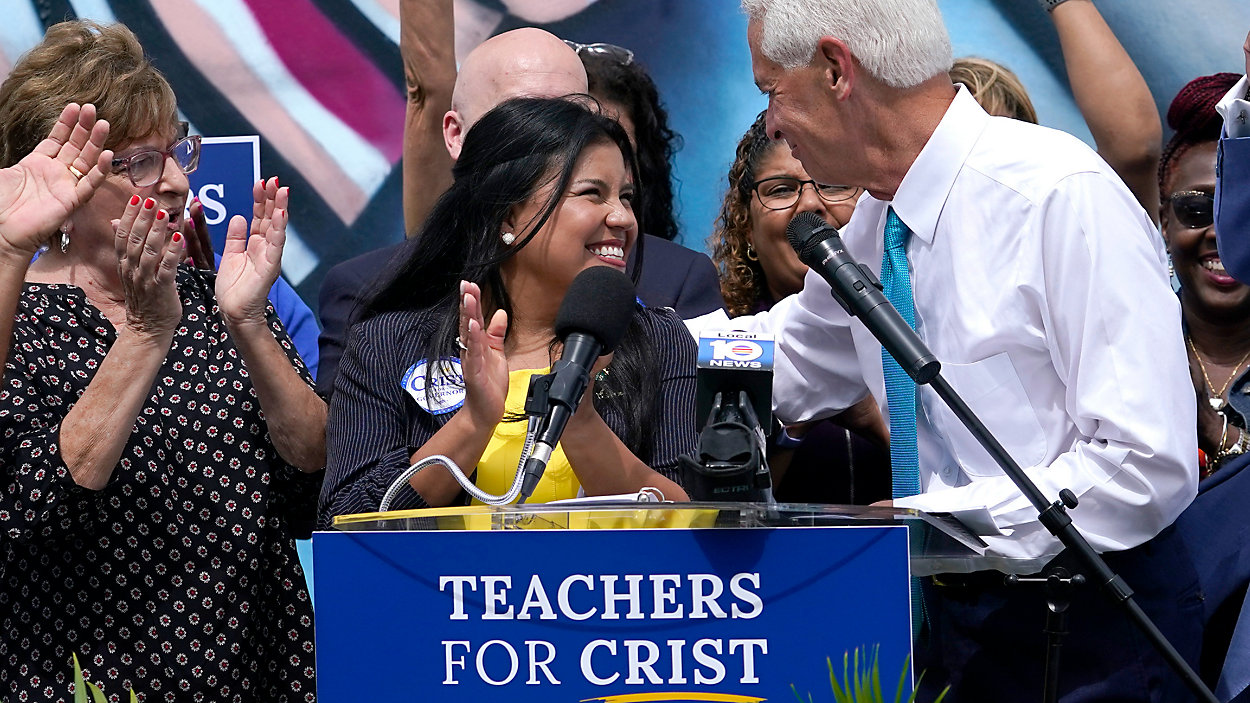 The exchange came a day after Crist declined to answer a reporter's question about Hernández's comment.

Charlie Crist does not say running mate Karla Hernández crossed a line with her comment that her background in teaching special education qualifies her to deal with a “dysfunctional Legislature.”

The comment, viewed as a joke by some, is the latest target of attack Republicans are driving against the Democratic gubernatorial ticket.

The exchange came a day after Crist declined to answer a reporter’s question about Hernández’s remarks, recorded in a video clip that has sparked outrage among critics. The news conference chiefly concerned the state-sponsored flights of migrants to Martha’s Vineyard Wednesday.

“We’re dealing with a serious topic right now,” he told reporters. “Let’s stay on this topic and continue to be serious.”

Crist announced Hernández, president of the United Teachers of Dade union, as his running mate late last month. The Hernández clip is of a Tuesday Cape Coral event obtained by Fox News Digital.

“I’m a sp-ed (special education) teacher, so my major is emotionally handicapped education, OK?” Hernández says in the clip. “That by itself qualifies me to deal with a dysfunctional Legislature.”

Crist, the Democratic nominee for Governor, selected the union leader in part for her background in education in an attempt to contrast the ticket against Gov. Ron DeSantis and his education agenda.

“Sickened by callous words from someone who claims to be an advocate for our children,” the First Lady wrote. And then she addressed Hernández in her tweet. “I will make it my mission to let all parents know of the ‘hate in your heart.’”

However, Crist’s team is standing firm.

“Ron DeSantis just trafficked families and children fleeing a brutal socialist regime for his own political purposes. Karla Hernández devoted her life to teaching children with exceptional needs. It’s clear what’s in her heart and Floridians are sick of the hate in his,” Crist’s communications director, Samantha Ramirez, said in a statement to Florida Politics Thursday evening.

Despite Crist’s response, Republicans say Hernández’s comment isn’t to be written off.

“She was disrespectful of people who have special needs,” Evan Power, Chairman of Chairs of the Republican Party of Florida, told Florida Politics. “It’s not an insignificant remark and it speaks to how she’s out of touch with the voters of Florida.”

nextBlake Dowling: A rock show for the ages