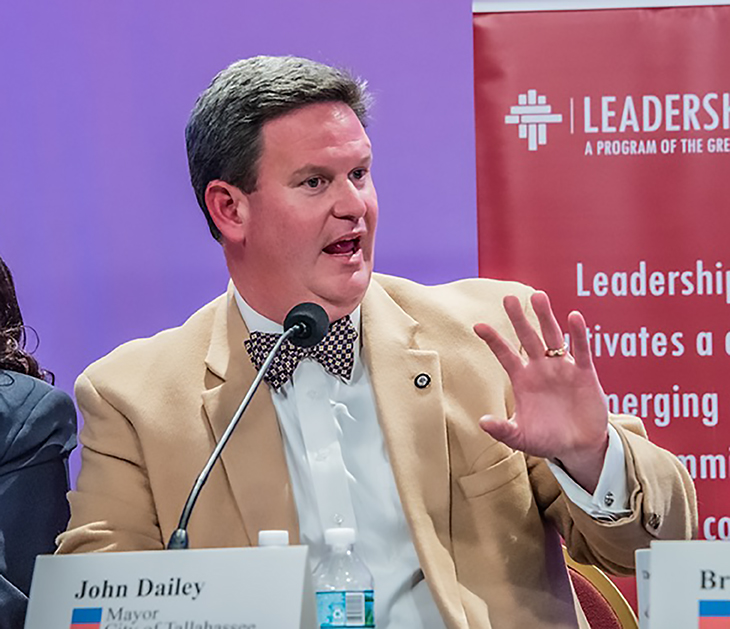 Dozier forced Dailey, the incumbent, to a runoff with a greater share of the vote in the Primary Election.

Tallahassee Mayor John Dailey repeatedly clashed with his opponent for re-election, Leon County Commissioner Kristin Dozier, during their debate, with clear differences between the candidates shown on growth and development, city utilities and homelessness.

Dailey is locked in a runoff with Dozier in the General Election after coming in second to her in the Primary, capturing 45.7% of the vote to Dozier’s 46%. Whitfield Leland nabbed 5.3% of votes in the Primary and Michael Ibrahim garnered 3%.

Dailey, who took office in 2018, acknowledged a litany of difficulties the city has faced in the last four years: federal indictments of former mayors Scott Maddox and Andrew Gillum, the COVID-19 pandemic, “domestic terrorist threats” against the state Capitol, protests over police actions and natural disasters.

“But there’s been one constant throughout the course of the last four years and that’s your Mayor and leadership in city hall,” Dailey said. He added that despite those struggles, the city’s economy is growing rapidly, he helped pass the “strongest ethics reform package in city history” and Tallahassee has led on environmental issues.

Dozier, who was elected to the County Commission in 2010 and re-elected subsequently, agreed the city has seen growth in jobs and economically. But she said the city can do more to address chronic issues such as affordable housing and poverty. She also blamed Dailey for creating divisiveness within the city she believes hinders those goals.

“There’s much we can be proud of. We’ve created a lot of opportunities. I’m running for Mayor because I want to keep the momentum going,” Dozier said. “One of the greatest threats that I see to that momentum is the dysfunction, the conflict and the controversy that we see at city hall.”

Dozier said she wants to look into putting the city-owned utility manager under the direct supervision of the City Commission, instead of having the City Manager act as an intermediary.

“What I’d like to explore is having the utility manager directly report to the City Commission; bring out some of these ideas into the public space,” Dozier said. “That would allow our City Manager to focus exclusively on city government.”

But Dailey disagreed, and said the city utility’s record and quality is highly rated. He also dismissed the idea of selling the utility to a large monopoly, such as Florida Power & Light. The specter of a sale was raised this summer when he met with a  Florida Power & Light lobbyist.

“I’m perfectly comfortable with the structure that we have right now,” Dailey said.

On homelessness, Dailey said the population of those without housing is falling but “they are more visible” and the city is dealing with complicated legal issues.

“When it comes down to the public camps, yes it is an issue because you cannot camp anywhere legally in Leon County except for on one campground and if you’re blocking the sidewalks, that’s an issue,” Dailey said.

Dozier said the city could work more collaboratively with the county and other groups to draw down more grant funds to address the issue. Dailey countered by noting the city has put more grant money towards homelessness in the last two years than in previous decades.

Both dismissed the idea of enacting a rent-control ordinance but were open to the possibility of a requirement that renters be notified well in advance of any major rent hike. The main issue, though, is to add more affordable housing units, both said.

But for Dailey, the major difference between him and Dozier is over the broader subject of growth and what form it should take in the city.

“We do have very different philosophical approaches to how we grow,” Dailey said. “Take a snapshot right now: in order to meet the growth needs of 2045 we need to build 30,000 units.”

Dozier said she isn’t opposed to growth and housing projects Dailey might favor, but wants to be methodical in the process.

“We may support the same exact project at the end of the process, but at the beginning, John Dailey is ready on Day 1. I want to listen to the community, I want to ask questions and make sure we have the best approach possible to get that product right at the end,” Dozier said.

“We’re at a big philosophical crossroads,” Dailey said. “Do we want to continue to move forward, grow sustainably … or are we going to come to a screeching halt?”

next‘Mountain out of a molehill’: Charlie Crist dismisses criticism of Karla Hernández remarks