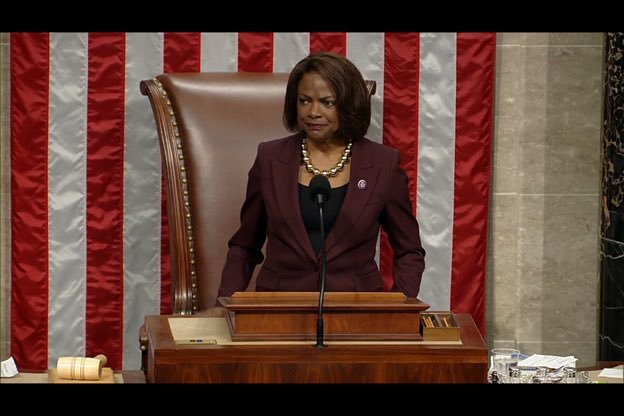 The legislation will provide law enforcement grants to police agencies across the country.

U.S. Rep. Val Demings presided over the House in the morning as the chamber took up and approved her Violent Incident Clearance and Technological Investigative Methods (VICTIM) Act (HR 5768).

When the House passed the bill on a 250-178 vote, the Orlando Democrat’s office described it as landmark legislation.

The legislation if it becomes law will fund local police departments to hire victim support personnel.

“Real life is different from television. Half of gun murders in the United States go unsolved, and victims are often left with no justice and little support,” she said.

“I vividly recall being on the scenes of young people, dead as a result of violence, knowing that their families would soon receive devastating news. I saw as a detective, detective sergeant, and chief of police that violent crimes require a coordinated and professional response to ensure justice. Passage of the VICTIM Act is a huge win for the safety of American communities and will help us put away violent criminals and keep families safe.”

It also could bring a political lift to Demings, the Democratic nominee challenging GOP U.S. Sen. Marco Rubio in November. The race takes place as Republicans nationwide run on a law and order platform. That includes Rubio, who despite Demings’ years in uniform has secured endorsements from most of the state’s major law enforcement organizations.

He has also painted Demings as a supporter of progressive calls to “defund the police,” something she has adamantly pushed back against.

This legislation, which literally funds police operations nationwide, could help combat the narrative.

“I am proud that Democrats and Republicans in the House came together to pass my legislation which will fund police departments to hire and train detectives and specialists specifically committed to investigate unsolved crimes, provide support services to victims’ families, bring the guilty to justice, and keep families safe,” Demings said.

She introduced the legislation last October, and it has been a priority for her to pass. The vote was delayed today as Democratic leaders whipped votes though it ultimately passed with no Democrats dissenting and 30 Republicans supporting it. Florida’s House delegation broke along party lines, with all Democrats supporting it and all Republicans voting “no.”

The rare opportunity to hold the gavel in the House as her bill came up for a vote took place as Demings is running for Senate. She has accentuated her police background over the course of the campaign, more often identified by the title “Chief” than “Representative.”

The VICTIM Act must still be passed by the Senate before heading to the White House for a signature.

A Senate companion has been sponsored by U.S. Sen. Cory Booker of New Jersey and Sen. Dick Durbin of Illinois, both Democrats.

“The VICTIM Act is an example of criminal justice reform that should appeal to people all over the political spectrum,” said Greg Newburn, director of Criminal Justice for the Niskanen Center, long involved in criminal justice policy in Florida.

“The VICTIM Act will help law enforcement deliver justice, and help victims rebuild their lives after tragedy. We are excited to see a common-sense response to the entrenched violence that threatens so many American communities. The VICTIM Act is a smart and reasonable solution to this difficult problem, and will help to make our communities more safe through important investments in law enforcement, and we’re proud to work with Rep. Demings on this important investment in safety.”

“Rep. Demings’ legislation is supported by science and best practice. The National Policing Institute applauds Congresswoman Demings’ leadership and support for evidence-based best practices that will keep the public safe and reduce crime.”

The National Organization of Black Law Enforcement Executives also cheered the legislation sponsored by a woman who would be Florida’s first Black Senator.

“The National Organization of Black Law Enforcement Executives applauds the continued efforts of Congresswoman Val Demings in supporting and strengthening the law enforcement profession,” said NOBLE President Frederick Thomas. “It is our opinion that this legislation will help increase the clearance rates of cases throughout the nation.”