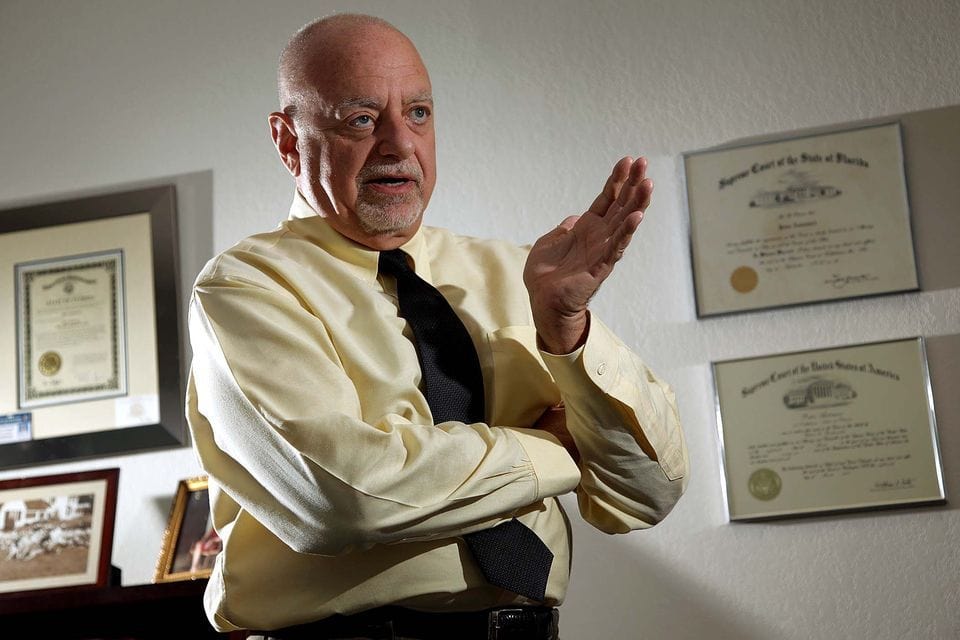 His performance overseeing the 2020 election in Broward County helped earn him the new Director role.

Longtime government official Pete Antonacci, who was serving as the head of Florida’s new election police unit, has died after suffering a major heart attack.

Gov. Ron DeSantis had named Antonacci, who served multiple Republican administrations during his lengthy career, to lead the Office of Election Crimes and Security less than four months prior. The office is the Department of State’s new outfit to investigate election crimes and voter fraud, a mission that has drawn condemnation from Democrats and DeSantis’ critics.

He was reportedly in the Capitol Friday when he suffered a massive heart attack.

“Casey and I are deeply saddened by the passing of Peter Antonacci, Director of the Office of Elections Crimes and Security,” DeSantis said in a statement. “He was a dedicated, tenacious and assiduous public servant, lawyer and respected professional — a friend to all in the State of Florida.”

Prior to being named Florida’s top elections cop in July, DeSantis and the Florida Cabinet appointed him as Director and Chief Judge of the state Division of Administrative Hearings in December 2020.

Before that, Antonacci was named Broward County Elections Supervisor in 2018 by then-Gov. Rick Scott and has held a series of high-level jobs, including Palm Beach County State Attorney, General Counsel to Scott and CEO of Enterprise Florida. He also served as the Executive Director of the South Florida Water Management District.

While he was largely known for his service during Republican administrations, he also worked alongside Democrats. He was a top aide to Democrat Bob Butterworth during his time as Attorney General.

“He vigilantly sought to uphold the law throughout his lengthy career as a deputy Attorney General, Statewide Prosecutor, General Counsel, Supervisor of Elections, and most recently as the newly appointed watchdog over Florida’s election security,” DeSantis continued. “His fighting passion will be missed, and his legacy will persist in the hearts and minds of many.”

Scott appointed Antonacci as the Broward County Election Supervisor, succeeding Brenda Snipes after error-prone recounts in the 2018 Midterms. In that role, he oversaw the 2020 election locally, which was widely heralded as a smooth cycle across the state. His performance in 2020 helped earn him the title of Director of the investigations office, DeSantis said in July.

“Peter Antonacci has dedicated his career to serving the state of Florida,” DeSantis said at the time. “I am confident he will lead the Office of Election Crimes and Security with integrity and ensure that Florida’s elections are the most secure in the nation.”

DeSantis proposed the election fraud investigation office in November as an agency to specialize in complicated election law. The Legislature provided 15 positions and $1.1 million for the office, which they established as part of the latest election law overhaul (SB 524) signed by DeSantis in April.

The Office of Election Crimes and Security, which works closely with the Attorney General’s Office, issued its first arrests last month after accusing 20 felons of illegally voting in the 2020 election. Many of the individuals said they didn’t realize they had broken the law, sparking outrage from the Governor’s critics.

Antonacci became a direct part of the story less than a month ago, when POLITICO Florida’s Matt Dixon reported that he had told local election officials they faced no consequences for wrongfully clearing the felons to vote. However, a spokesperson for DeSantis’ office had previously suggested local officials should be held accountable.

Sources tell Florida Politics Antonacci died after walking out in the middle of a meeting with Secretary of State Cord Byrd and Deputy Chief of Staff to DeSantis Alex Kelly. Although the situation was reportedly heated, a source in the room said they expected Antonacci to return, but he never did.

Antonacci’s death comes as a shock to the Florida political world.

Here are reactions to Antonacci’s passing and tributes to his career:

“Pete Antonacci was a dedicated public servant and a devoted family man. Ann and I are devastated to learn of his loss and are praying for his family, friends and the countless Floridians who knew and loved Pete as we did. Pete was a proud Floridian, raised in Hialeah, and devoted decades of his life to serving Florida families as a prosecutor, master of the law and leader. When it came to his work, Pete could get anything done. From his time as my General Counsel in the Governor’s Office, to being the Broward County Supervisor of Elections, Pete worked hard, with total integrity, and knew how to bring people together and solve problems. I was honored to call him a friend and proud to work with him. Pete will be terribly missed, but leaves behind a remarkable legacy of honorable service to our great State of Florida.”

Pete was not only a loving father, husband, he was mentor to many and an institution of Florida Politics.

I first met Pete in the 90s while serving on the Florida elections commission and it’s been history ever since. It’s easier to list the jobs he didn’t have than the ones he did. Pete’s been everything from a General Counsel to a Governor, to the head of the state’s economic development agency, to the head of a water management district and so on and so on.

He was dearly beloved and is going to be missed.

My heart goes out to his family, and his legacy will forever live on through the halls of the Capitol of Florida.

“Pete would walk through fire for his friends, teammates and those he served. So many confided in him and he would never share a word of what anyone said. He was whip smart with the heart of a lion – a rare combination in our carefully manicured social media world. He loved to mentor. I would turn to him often for advice, but I most enjoyed how his face lit up when he met my kids and when he would talk about his kids and grandkids. We lost a legend, but it hurts because we lost a true friend.”

“Governor Crist extends his deepest condolences to Peter Antonacci’s family, friends, and loved ones,” said Samantha Ramirez. “Peter Antonacci was a dedicated and respected public servant with a long history of working with members from both sides of the aisle to better Florida. May he rest in peace.”

“I am saddened by the loss of Peter Antonacci, who passed away unexpectedly this afternoon, Friday, September 23, 2022.

Pete was a steadfast public servant throughout his career and played an important role at the Florida Department of State having been appointed by Governor Ron DeSantis in July as Director of the Office of Election Crimes and Security.

My thoughts and prayers and those of the employees who worked closely with Pete are with his family and loved ones. The family has asked for their privacy during this time of grief.”

This is just devastating news. I was with Pete less than a month ago and he was so thoughtful and generous with his time. He has always been a fighter and never said no to the opportunity to make things right. I remember the first time he called me when I was a county commissioner — just to chat about people and politics in Broward. We will miss him and pray for his family. #RIP

“I am deeply saddened to learn of the sudden passing of my friend, Pete Antonacci, who dedicated his professional life to serving our State in a multitude of roles. I first met Pete back in 1999, when I was a young Assistant Attorney General under AG Bob Butterworth and he was the second in command. I never knew he was a Republican working for a Democratic AG, because it didn’t matter. Pete always put public service and the rule of law ahead of partisanship. Among his many different positions in state government, Pete served as my immediate predecessor as interim State Attorney here in Palm Beach County from 2011-12, and was invaluable in helping me with the transition. He was always there for advice and a good chuckle from his wry sense of humor. He loved Florida and the law, but most of all he was devoted to his family: his wife, Anne, and daughters, Alexis & Claudia, and grandchildren. Sending prayers to them during this difficult time.  May Pete’s name be of blessed memory always.”

“Pete was beyond a shadow of a doubt one of the finest people I have ever had the honor of knowing. He wasn’t just a jack of all trades but was an organizational master who understood how to bring out the best out in people. Florida was lucky beyond measure to have had him for as long as we did.”

“Having both a legal and public service background, I have always had the highest level of respect for  Pete Antonucci as one who set the gold standard in both areas. Pete was a lawyers’ lawyer, which is one of the highest accolades a lawyer can receive from peers. RIP in peace Pete. Thank you for your service to your state that you loved and my sympathies and prayers to your family.”

“RIP Pete Antonacci, a longtime Florida official who held varying jobs over many decades. In his personal life he was a mensch. Here he is holding my lil newborn baby girl 25 years ago. Deep condolences to his sweet family.”

RIP Pete Antonacci, a longtime #Florida official who held varying jobs over many decades. In his personal life he was a mensch. Here he is holding my lil newborn baby girl 25 years ago. Deep condolences to his sweet family. pic.twitter.com/rTR67elHT9