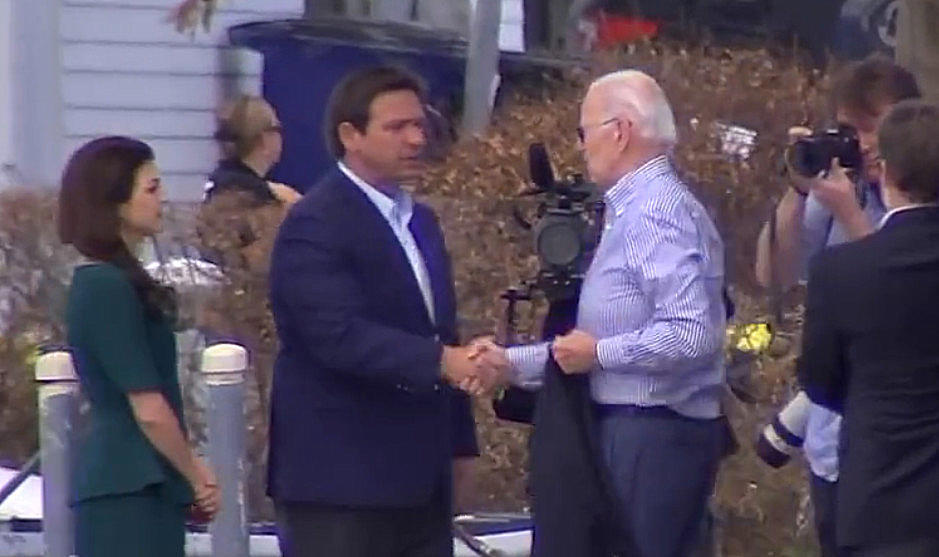 'I can assure you is that the federal government will be here until it’s finished.'

The First Ladies for the nation and state stood alongside the national figures as they shared information about the storm outside the range of press microphones. Shortly after the greeting, the Governor led a briefing with state officials and the White House press pool in the room. The first words out of the Republican Governor’s briefing with the Democratic president similarly broadcast unity.

“Thanks to President Biden,” DeSantis said.

Biden said after a short aerial tour, it was clear Florida’s state government and the federal administration will need to remain in cooperation long term. He predicted recovery from the storm won’t last days and weeks, but rather months and years.

“The only thing I can assure you is that the federal government will be here until it’s finished,” he said.

It’s a tenor different than many imagine will exist should the two leaders face each other in a few years on a presidential debate stage. It’s also a sight few expected would come barely a month away from a critical Midterm Election where DeSantis personally worked to provide Republicans opportunities to control Congress the next two years.

Indeed, the threat of a storm forced Biden to postpone a political trip to Florida where he planned to boost DeSantis’ Democratic opponent, Charlie Crist.

But so goes the aftermath of an historic Category 4 storm. Hurricane Ian made landfall at Cayo Cost on Sept. 27, just over a week before Biden’s visit to Southwest Florida.

Biden flew to Southwest Florida as the administration announced governments and other entities will be able to apply for full reimbursement costs on debris removal, emergency overtime and temporary repairs for 60 days, double the normal allowed timeframe.

He met with DeSantis and other leaders after seeing the disaster-struck region from the skies. There, DeSantis noted the rapid strides made in restoring basic utilities.

“We now have over 97% of power in Florida,” DeSantis said, noting a surge of thousands of linemen who came into the state as soon as it was safe to do so.

Florida First Lady Casey DeSantis noted the launch through Volunteer Florida of the Florida Disaster Fund, which as of Tuesday had raised upward of $35 million.

Gov. DeSantis said Florida felt “fortunate to have good coordination” with both FEMA and with the White House from the start of the disaster. To date, Florida has reported 2,500 rescues and set up 28 state-run distribution sites for resources, which to date have given out 45 million gallons of water and 2 million pounds of ice.

He thanked FEMA Administrator Deanne Criswell for cutting through bureaucracy. And he thanked the community for banding together following the broad trauma.

“The spirit of the people of this state and southwest Florida has been phenomenal,” he said.

U.S. Sens. Marco Rubio and Rick Scott, both Republicans who also have demonstrated presidential ambitions, also participated in the briefing. So did U.S. Rep. Byron Donalds, a Naples Republican whose district took the brunt of flooding and storm force winds. Lee County Commission Chairman Cecile Pendergrass, also a Republican, rode with Biden on an Osprey helicopter to see the area.

DeSantis told Biden that while plenty of damage can be viewed from the sky, even more becomes apparent during a walking tour of the barrier islands. At ground level, the number of blue tarps on roofs and rubble on the ground brings the message home.

But Biden said it did not take much to see the community had been devastated.

FEMA will open three new disaster centers in Lee County, Biden said. In meetings with local officials and with individuals impacted by the storm who met briefly with Biden at Fisherman’s Wharf, the President said he knew many waited on the phone for hours to speak with government representatives.

“We’re going to try to speed that up by having additional personnel,” Biden promised.

“You can’t go back to what it was before. You got to build back better.”

“You have my commitment,” he said, “that we’re not going to leave.”

But DeSantis said the community also welcomes help in an hour of need.

“The spirit of the people of this state and Southwest Florida has been phenomenal,” DeSantis said.

He told Biden nothing will stop efforts on Florida’s end of working cooperatively with the administration.

“Welcome to Florida,” he told the President. “We appreciate working together.”