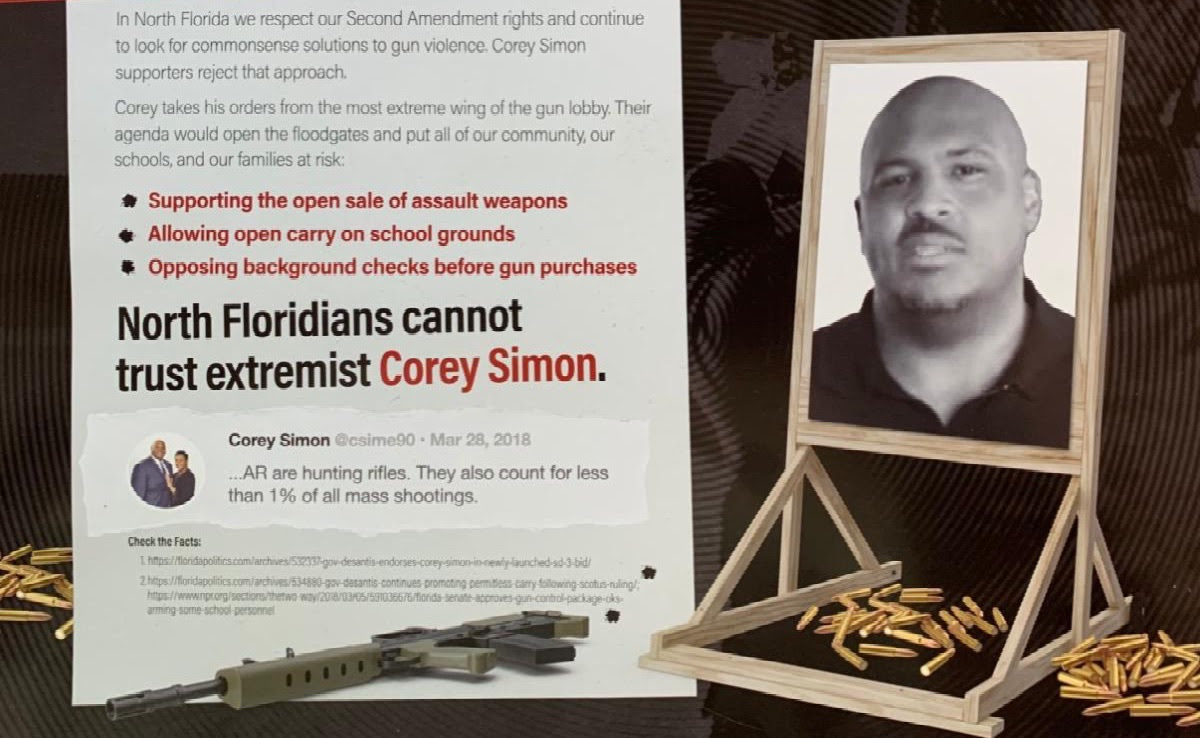 ‘The dangerous, racist implications of this kind of imagery are unconscionable.’

A pair of Black Central Florida Republicans are the latest officials to denounce an ad targeting Republican state Senate candidate Corey Simon that some are arguing could qualify as racist.

Simon, a former football star who played for Florida State University and in the National Football League, is a subject of a campaign mailer recently sent by Democratic campaign officials hoping to retain Sen. Loranne Ausley in Northwest Florida’s Senate District 3.

Some say the mailer, which focuses on gun control and depicts Simon on a shooting target, calls back to a racist history of Black men as physical targets or characterizations of Black men as violent.

Simon’s campaign, local Republicans, the Senate President-designate and a Tallahassee-area pastor have already denounced the ad, which was put together by a campaign arm of Senate Democrats run by Senate Minority Leader Lauren Book. On Thursday, Deltona Republican Rep. Webster Barnaby and Seminole Republican House candidate Berny Jacques, both of whom are Black men, became the latest to come to Simon’s defense.

“The divisive, ignorant use of a Black man for target practice has no place in civil political discourse,” Barnaby and Jacques said in their joint statement.

“We hope that members of the Florida Black Caucus will join us in condemning this mailer, and those who approved its creation and distribution. We may not see eye-to-eye on everything, but surely we can agree that political disagreement should never include dangerous imagery of a Black man being used for target practice.”

On one side, the mailer contains cutouts of children backed by targets with bullet holes.

On the flip side, the ad shows a picture of Simon displayed on a target stand. The ad, paid for by the Florida Democratic Legislative Campaign Committee, includes a disclaimer mentioning support for Ausley, fellow Sen. Janet Cruz and Miami Senate candidate Janelle Perez.

“The dangerous, racist implications of this kind of imagery are unconscionable,” Barnaby and Jacques said. “To think that Florida Democrats Lauren Book, Loranne Ausley, Janet Cruz, Janelle Perez and God only knows how many consultants, staff and lawyers participated in and approved this hateful garbage underscores the partisan hypocrisy behind these Florida Democrats’ Black Lives Matter rhetoric.”

According to the Jim Crow Museum at Ferris State University, Black faces or live Black targets were popular in carnival games during the late 19th century.

“As a Black man, I’m offended by that ad,” Holmes said.

Ausley — who is perhaps the most vulnerable Senate Democrat seeking re-election in a cycle where Democrats need to hold every seat to deny Senate Republicans a three-fifths majority — was asked about the mailer during a debate with Simon on Monday.

However, the Florida Democratic Legislative Campaign Committee told Florida Politics it has written approvals from Ausley and the two other Democrats named in the ad. The committee has not returned a request to present those approvals, a request that was sent before the debate.

Simon is a former Florida State University and National Football League football player and former CEO of Volunteer Florida who is in his first campaign for office. Ausley served in the House from 2000 to 2008 and 2016 to 2020 and was elected to the Senate in 2020. Both live in Tallahassee.