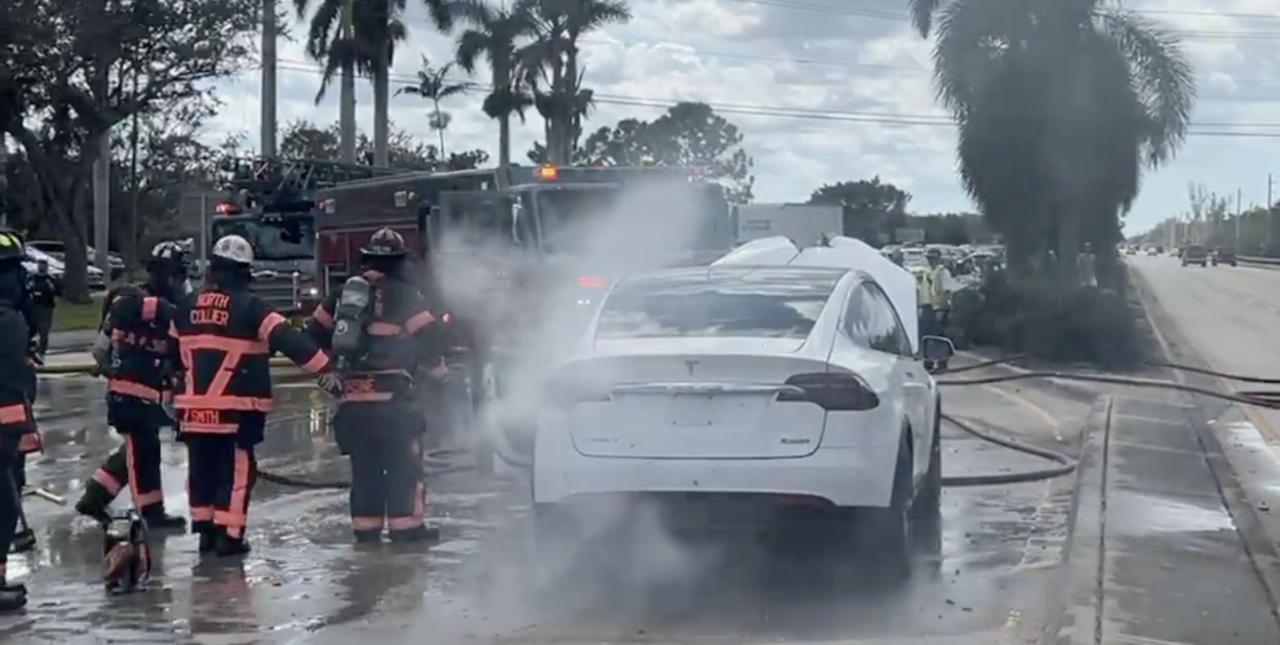 In the wake of Hurricane Ian, Chief Financial Officer Jimmy Patronis is expressing new concern over electric vehicles. He penned a letter to the National Highway Traffic Safety Administration sounding alarms on the dangerous mix of lithium batteries and storm surge.

Patronis, whose duties include state Fire Marshal, said the administration needs to assess fire risks associated with saltwater on electric vehicles. In the meantime, he said fire teams need more support to deal with an “inevitable” increase in fires associated with electric-powered automobiles.

He sent a copy of the letter to Rep. Frank Pallone, Chair of the House Energy and Commerce Committee.

He said the problem became especially apparent during ride-alongs after Hurricane Ian. He responded with North Collier Fire Rescue on Oct. 6, eight days after Hurricane Ian made landfall on Sept. 28. The storm delivered the greatest damage to the north in Lee County, but Collier County withstood major flooding as more than six feet of storm surge flooded populated areas with seawater from the Gulf of Mexico.

One major problem Patronis described was that even after lithium battery fires were extinguished, continued exposure to saltwater caused new ignitions.

“I joined North Collier Fire Rescue to assess response activities related to Hurricane Ian and saw with my own eyes an EV continuously ignite, and continually reignite, as fireteams doused the vehicle with tens-of-thousands of gallons of water,” Patronis said. “Subsequently, I was informed by the fire department that the vehicle, once again reignited when it was loaded onto the tow truck. Based on my conversations with area firefighters, this is not an isolated incident. As you can appreciate, I am very concerned that we may have a ticking time bomb on our hands.”

Much of the existing federal guidance on disaster response involving submerged vehicles does not account for the risks associated with the exposure of lithium car batteries to saltwater, he said.

He wants the NHTSA to require electric car manufacturers of the dangers related to vehicles impacted by storm surge, and said his office will distribute that information in Florida as soon as it becomes available.

He also asked for any available research on timelines for corrosion leading to these kinds of car fires, and for guidance on where to transport compromised electric vehicles if they need to be allowed to burn out. Tow truck drivers especially need direction, he said.

Patronis said he wants answers to questions posed in his letter no later than Friday, Oct. 14.

“In my experience, Southwest Florida has a significant number of EVs in use, and if those EVs were left behind, exposed to storm surge, and sitting in garages, there is a risk of fires,” he said. “As the State Fire Marshal, I must ensure local fire teams have access to all the equipment needed for these operations, including Tender Strike Teams, Engine Strike Teams, PPE and thermal imagery. Your responses may be the difference between life and death.”

There’s a ton of EVs disabled from Ian. As those batteries corrode, fires start. That’s a new challenge that our firefighters haven’t faced before. At least on this kind of scale. #HurricaneIan pic.twitter.com/WsErgA6evO