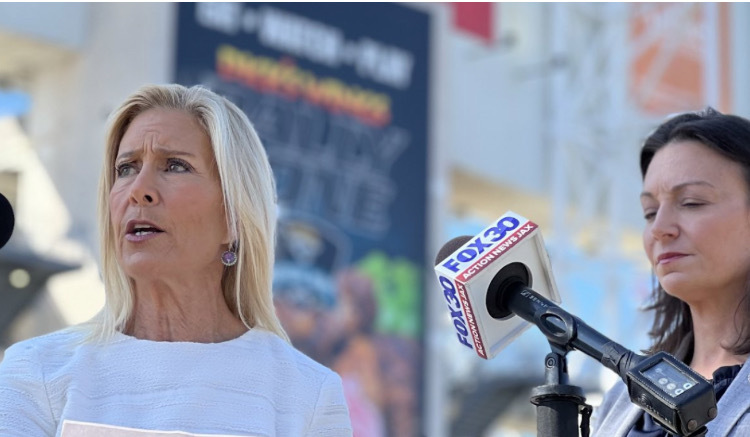 The only statewide elected Democrat and the leading Democrat in the Jacksonville mayoral race are speaking out against recent antisemitic displays in the city.

Agriculture Commissioner Nikki Fried and mayoral hopeful Donna Deegan held a press conference Tuesday near TIAA Bank field, the site of the Florida-Georgia game, where one such display happened Saturday night as people were leaving.

“When we see the rise of antisemitism happening throughout our state, we have a moral obligation to speak out, to condemn these conversations and hate speech,” Fried said. “Otherwise we are emboldening their actions, and that is unacceptable. We need every elected official, whether local, state, or federal, to speak out.”

Deegan invoked her family’s history in the city in remarks.

“We are here in solidarity with our Jewish community to condemn these despicable acts intended to make them feel unwelcome in Jacksonville,” Deegan said.

“The Jacksonville we know and love, the one we want to nourish, is diverse, welcoming, and inclusive. It acknowledges the racial intolerance of the past and present and works every day to heal those divisions. It welcomes immigrants from all over the world with open arms.

“That spirit is why my great great grandfather Jacob Hazouri came here from the Middle East in 1905 to escape oppression and in the hopes of finding a better life. The Jacksonville we know and love welcomes our Jewish neighbors and people of all faiths.”

The antisemitic messages first surfaced on an Interstate 10 overpass in western Duval County. A banner urged drivers to “end Jewish supremacy” and “honk if you know it was the Jews.”

Another one surfaced on Arlington Expressway, extolling Kanye West for being “right about the Jews.”

After the football game downtown, similar messages were broadcast on the stadium and other downtown buildings.

Deegan is urging Jacksonville to have “hard and necessary conversations as a community.”

“We can’t look away. We can’t shy away. We must come together as a community to take our challenges head on and build trust with each other,” she asserted.