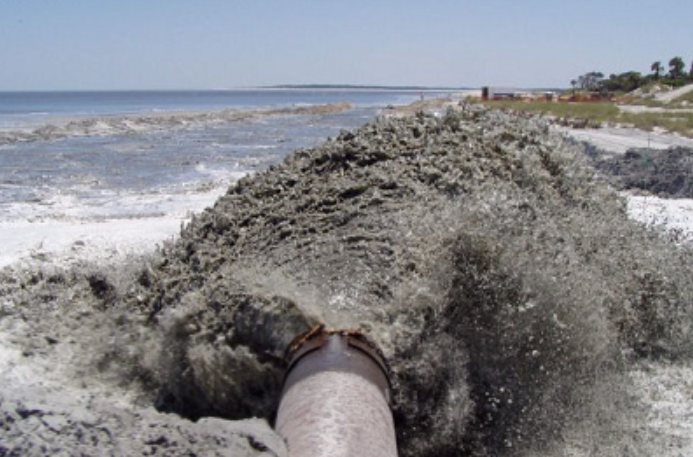 At one time, NOAA Fisheries committed people and time to oversight of beach renourishment projects and the effects — often detrimental — of those projects to neighboring essential fish habitat. It was a part of a consultation process on large civil projects.

That’s not the case anymore.

“The big message here is that we have changed our program quite dramatically in the last 10 years,” said Pace Wilber, branch chief of the Atlantic and Caribbean Branch of the Habitat Conservation Division of NOAA Fisheries’ Southeast Regional Office. “Ten years ago, we focused a lot on reviewing public notices from the Army Corps of Engineers, and now that’s a relatively rare event on our part.”

Wilber gave his update to a recent meeting of the Habitat Protection and Ecosystem-Based Management Advisory Panel of the South Atlantic Fishery Management Council (SAFMC), the agency tasked with the responsibility of managing federal saltwater fisheries from the North Carolina Outer Banks to the Florida Keys.

Between projects related to large infrastructure legislation recently passed by Congress and disaster-related recovery projects, along with new developments, there aren’t enough people to do the work.

“I’ve got to fit all that stuff into a relatively small part of my labor pie,” Wilber said.

The number of projects receiving detailed reviews is on the decline.

“Unfortunately, particularly if you take out all the dock projects we used to just kind of pad my numbers, that trend is probably going to continue,” Wilber said.

“The larger projects are the ones getting the most attention from us, and I’ve crossed beach nourishment out (on the presentation slide) because that used to be one of our highest priority activities. It was a way to deal with hundreds of acres at a time, but we just don’t have the human resources anymore to pull that off, because we now have to deal with the wind projects, and the wind projects are taking a huge amount of our time.”

Those South Atlantic wind projects are mainly a North Carolina concern, while beach renourishment is a big deal along the Atlantic Coast in various places. A monthslong renourishment project on Amelia Island’s south end concluded earlier this year.

This comes at a time when the same SAFMC advisory panel is working through a policy statement against beach renourishment, with accompanying best management practices when officials deem such activity as necessary.

“In general, frequent and widespread beach renourishment projects — dredge-and-fill — occurring in the United States southeast together constitute a real and significant threat to (essential fish habitat) under the jurisdiction of the SAFMC,” according to a draft of the policy.

“Coastal communities are strongly encouraged to evaluate the full range alternatives, including retreat, to these types of projects when addressing erosion and sea level rise.”

The possibility exists for the SAFMC to step into those projects that NOAA Fisheries can’t handle anymore.

“The Council has a lot of the same responsibilities that we do, they just don’t have, necessarily, the infrastructure to pull it off,” he said.

previousSunburn — The morning read of what’s hot in Florida politics — 11.2.22