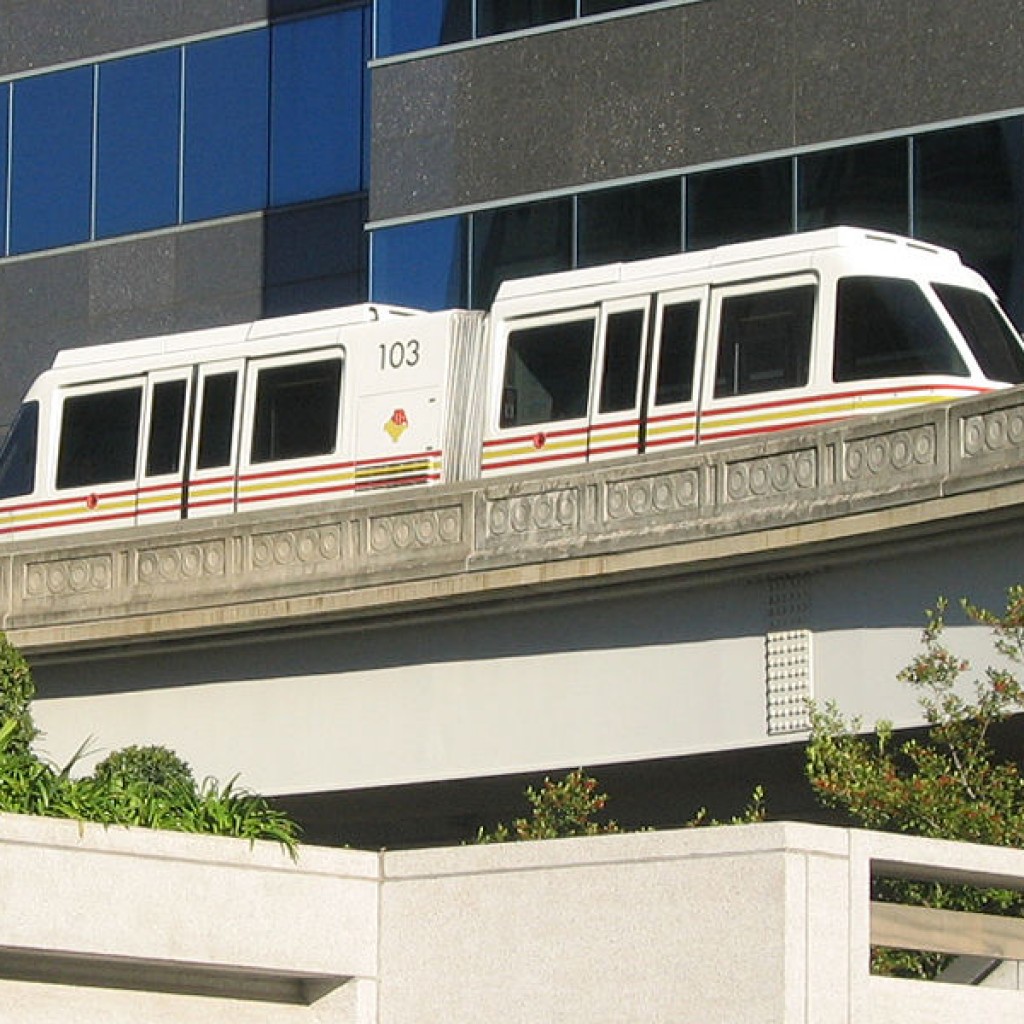 Storm clouds brewed over the main branch of the Jacksonville Public Library on Monday, as the talk inside centered on the Skyway. A one-hour subcommittee meeting preceded the first public forum about what to do with the outmoded conveyance.

Like a VCR or compact disc player, the once state-of-the-art train system now requires either overhaul, car replacement, or removal – all options with attendant public cost.

Wallace, who has lived in two other cities (Miami and Detroit) with people movers, was particularly well-suited to hold forth on the importance of the conveyance to a larger plan.

For Wallace, the question is “how to move people in and around” the 4.1 square mile area of downtown.

The ideal would include connecting neighborhoods from the Brooklyn area of Riverside to downtown to the Shipyards and the sports complex.

“Connect, captivate, and celebrate,” Wallace said regarding his vision for downtown, which is longitudinal, rooted in a “conceptual 2025 redevelopment master plan” that would, for example, tie together the strong Brooklyn area with the neighboring LaVilla district, once known as the “Harlem of the South,” to drive development on a “block by block” basis to drive economic development.

Another development tool: moving public lands into private hands, which also strikes Wallace as an impetus for development.

To that end, a concentrated mass transit system, to move people throughout downtown, is essential.

This could include the Skyway, water taxis, and so on.

The gist of Wallace’s presentation: playing off the downtown core, and unifying it with surrounding assets, to “reinforce downtown,” by increasing housing to target “key demographic groups seeking a more urban lifestyle,” to simplify a “lengthy developmental approval process,” and to use “planning and economic development” to promote a “healthy living lifestyle.”

To this end, Wallace would like to double the amount of downtown residents, increasing employment and small business presence downtown also, with the ultimate goal of strengthening the tax base.

Projects ranging from traffic calming on Riverplace Boulevard to instituting Downtown Wi-Fi are necessary, said Wallace, to ensure that Jacksonville is competitive with other cities.

Wallace identifies “work to be done” as including remedying “inefficient public transportation” and eliminating the preponderance of one-way streets, which he attributed to planning before his time.

From there, the program transitioned into the JTA “vision” for the transit system, as articulated by Brad Thoburn.

Initiatives like the First Coast Flyer, streamlining downtown bus routes, and such are intended to give mass transit more mass appeal, which also facilitating stronger connections to regional transportation, including an intercity bus terminal and, eventually, commuter rail extending from Yulee down to either St. Augustine or Green Cove Springs.

Thoburn noted that some want to tear it down; others want to expand it.

Thoburn’s take is that “downtowns don’t do well without strong public transportation,” and the “cars only solution is going to really constrain” Jacksonville’s “economic development future.”

To that end, he added, a comprehensive regional solution is required. And the Skyway, he sees as part of that.

Wallace, in followup, mentioned that connecting Lavilla to the emerging Brooklyn neighborhood is essential to bringing that neighborhood up.

“You still have some of the warehouse areas there. Warehouses make great conversions to lofts… on weekends they turn into art studios,” he said, citing his Miami experience as an example of how rejuvenating a neighborhood can bring benefits that can’t be precisely forecast.

While the DIA is agnostic on the Skyway itself, Wallace says that transportation is essential to the kinds of progress necessary for the future of downtown.

Jeanne Miller, who looks headed for the JTA Board, asked a blunt question.

“What if the skyway went away?”

Among the benefits, said Wallace, development depends on tax credits derived from being close to mass transit, and so the Skyway drives development.

Wallace also sees connectivity as a driver to retain businesses downtown, and a mobility plan for downtown and inner-ring neighborhoods creates a holistic unity.