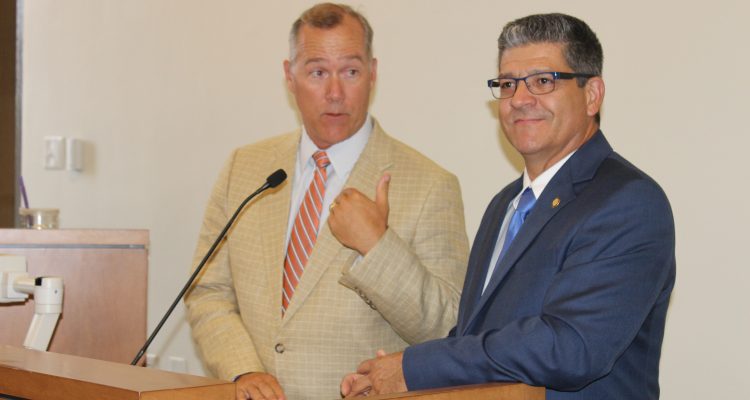 Reps. Mike Miller and Bob Cortes appeared at the Winter Park City Commission meeting Monday to update the commission on what happened in the last legislative session.

They touted their collective victories, including a balanced budget and $82 billion in tax cuts after Gov. Rick Scott‘s vetoes. Among the notable tax cuts were $23.7 billion in education, $34.3 billion in human services and health care, and $4.5 billion in criminal and civil justice.

They also talked about numerous bills passed, such as HB 989, to help fund water conservation for the state’s various treasured water bodies.

Miller said a law on housing assistance for the homeless had been passed in “true Republican style,” with less regulation on the local level on how to assist the homeless. The bill, HB 1235, revises requirements to take state funds and put them towards projects on the local level to eradicate homelessness and encourage counties and local municipalities to make their own plans to fight homelessness.

“Society is judged on how they treat the less fortunate, who, through no fault of their own, need help,” he said. “This is the way to do it.”

One unpassed bill both expressed regret over was HB 345, which would have helped firefighters who had died or had to take disability due to cancer. The bill would have presumed it as “accidental” and allowed local governments to purchase insurance for them.

Cortes said it was “of huge importance,” but that he and others wanted a bill that wouldn’t put undue burden on cities next time.

Cortes talked about HB 7029, which he called a “train” bill — one where many amendments were added to it at the last minute. The bill was intended to add more accountability for charter schools, but it was amended to add a provision allowing students to change school districts. Cortes said despite the concerns of some over what would happen if too many students started changing districts, he doubted there would be a huge number doing so.

Mayor Steve Leary said the two had “really worked hard” for the people of Winter Park.

Miller and Cortes both said if they were re-elected in November, they’d continue doing that work.

“Our door is open,” Miller said. “Let us know what’s important in your city.”