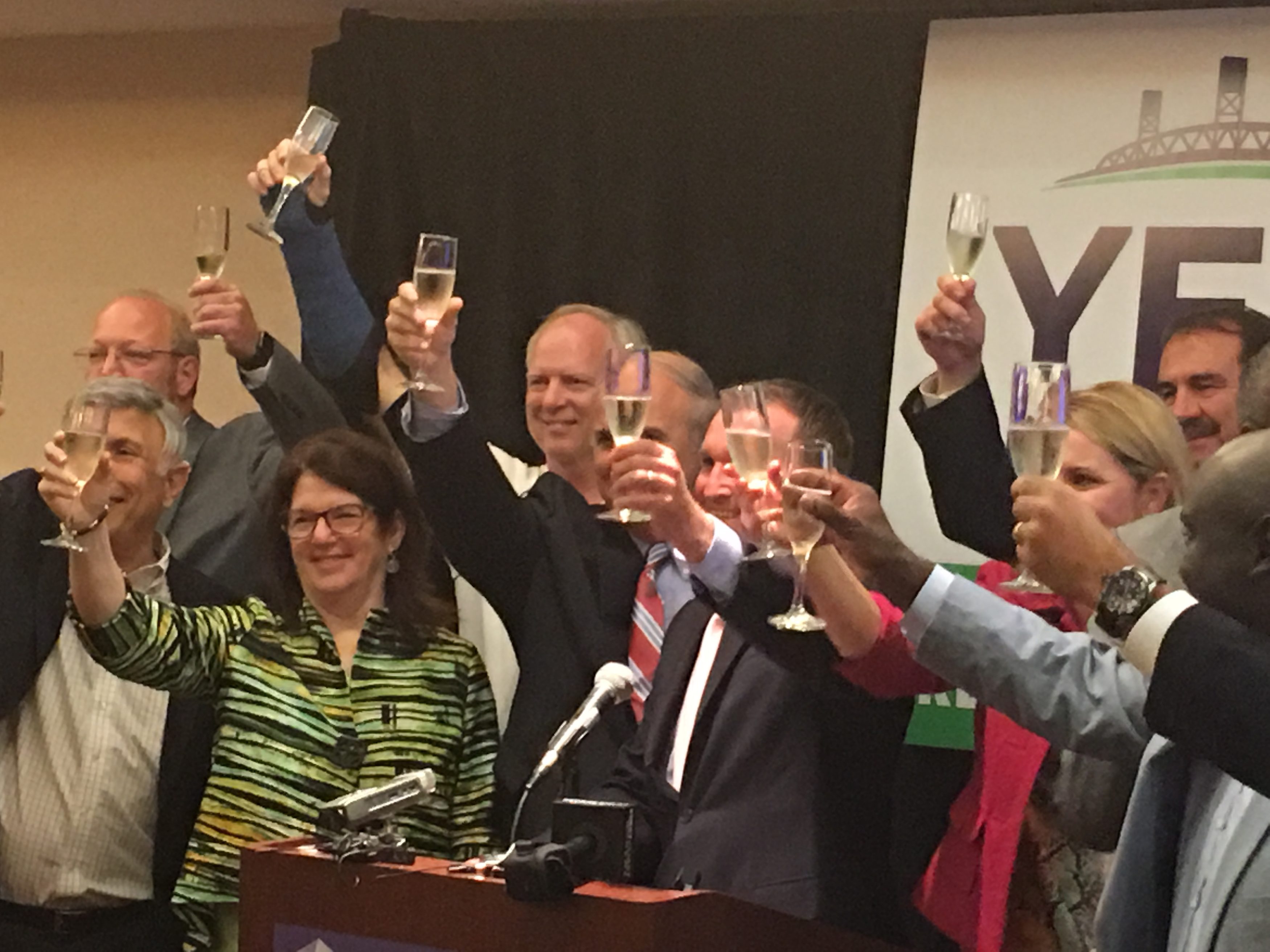 The northeast Florida primaries have been in the books for almost 24 hours at this writing. A review of the winners — and the losers — goes beyond the election returns to look at what happened to create these outcomes that will, in historical retrospect, seem inevitable.

Lenny Curry — The chattering classes told him he couldn’t get County Referendum 1 through without making promises to police and fire unions, the African-American community in Northwest Jax, or the beaches. He proved them wrong. Curry — the former party boss — was able to party like a boss Tuesday night, after a resounding 65 to 35 victory authorized extension of the Better Jacksonville Plan tax (with a healthier margin than John Delaney could ever have imagined back in the day). That victory was a result of coalition building: Council Democrats and elder statesmen from the opposing party (including former Sheriff Nat Glover) helped make the pitch. The poll numbers got better for the referendum, and even a seeming misplay like hosting the Donald Trump rally didn’t even hurt Curry … in fact, it reassured Republicans that even though it’s One City, One Jacksonville, the mayor is still a capital-R Republican.

Cindy Graves — Graves was made Duval GOP chair to right the ship after the underwhelming Lake Ray era — and she did just that. Graves is exceedingly comfortable with the Trumpian GOP, and just as comfortable with John Rutherford as the CD 4 Congressman for as long as he wants it. Worth watching: how much face time The Donald gets in Duval in September and October.

Susie Wiles — The BIG winner of Election Night? She was integral in the “Yes for Jax” push. She was also integral in helping to introduce Al Lawson to Jacksonville media. Lawson, who couldn’t buy a Democratic endorsement in the 904, got 20 percent in Duval … in part because of a strong TV ad, but also in part because Wiles crossed party lines to help out a friend to her firm, Ballard Partners. Wiles won’t be around as much for the next little while: she’s moving on to an expanded role in the Trump campaign, helping with “battleground communications.” The smartest political operative in Jacksonville history?

Kim Daniels — The demon buster goes to Tallahassee! Daniels won the Democratic primary in House District 14 over a better-funded candidate, Leslie Jean-Bart, who had commercial radio spots and the endorsement of the incumbent. Daniels, who wasn’t exactly a legislative whirlwind on the Jacksonville City Council during her single four-year term, found a way to connect with the people in her district, which made all the difference.

Bert Ralston — The political consultant for Clay Yarborough kept his candidate’s uniform clean in a competitive HD 11 race, in which Yarborough (a former Councilman) faced off against another former Councilman Don Redman, as well as former state legislator Stan Jordan and City Council assistant Terrance Freeman. Despite a big push of outside money against him, Yarborough’s combination of ground game and name identification won him the race. No big surprise; just fundamentals.

Reggie Fullwood — He had considered not running for re-election once 14 indictments dropped on April 15. But he did it anyway, even though he had three primary challengers. He managed to take the focus of the race away from those legal issues and put it on his strength, constituent service. Fullwood, with six years in Tallahassee, preceded by eight on the Jacksonville City Council, believes he can get the federal charges thrown out. Time will tell on that one; his motion to dismiss, filed Aug. 19, still has not been acted upon.

Brian Hughes and Tim Baker — The most polarizing consultants to ever work Northeast Florida? You bet. Just as people clucked at and criticized their ability to go in on Alvin Brown when Lenny Curry beat him for mayor, they issued the same criticisms of how Hughes/Baker sold County Referendum 1 and attacked Angela Corey. Who’s laughing now? They got the referendum — which most observers thought wouldn’t pass — approved by 30 points. And Corey went down to Melissa Nelson by almost 40. It’s called Data Targeting for a reason; they are able to target messages to audiences, time and again, that are receptive to them. The referendum was sold not by targeting super voters, but by engaging medium-propensity voters who had skin in the game of living in Jacksonville. Often misunderstood by the media and more timid political types, these guys understand better than anyone — including the people paying the bills — how to sell a political message in Northeast Florida. Their marketing for the tax extension referendum will be studied by operatives in other cities who are attempting to sell similar proposals. Notable also: they were behind John Rutherford doubling Hans Tanzler‘s vote total with half the money Tanzler had. And they also ended the political career of Dick Kravitz, who lost to their candidate in HD 16 despite coming into the race with vastly superior name identification.

Polarizing incumbents — It doesn’t help, it turns out, to run for re-election in a redrawn district with 22 federal counts hanging over your head, and then compare that indictment to verbal charges of sexual deviancy among reporters. It also doesn’t help, it turns out, to run for re-election after a grand jury recommends that you leave office, saying that the voters will decide. And it doesn’t help, it also turns out, to become the walking emblem of how “tough on crime” policies go horribly wrong. Rep. Corrine Brown, Public Defender Matt Shirk, and State Attorney Angela Corey can speak to that. The latter can also speak to how even Republican primary voters can see the closing of primaries as bad faith, especially when it’s done in the most flagrant way possible. Brinkmann v. Francois may be sound legal precedent; but for voters who like to believe that in the process of democracy, it’s a bad look for a candidate who faced trust issues from a huge part of the electorate already. Corey was disqualified by voters before the first PAC ad went in on her. And a big reason? The prevailing perception of bad faith in that office.

Law-n-Order messaging — In the dying days of the Angela Corey campaign, there was a co-branding with the interests of the Fraternal Order of Police, and a constant refrain that Melissa Nelson couldn’t make the tough decisions to put someone to death. Corey’s closing TV spot, which was a bit too closely coordinated with her PAC, actually made that case. Jacksonville, a very conservative metro, is not irrational when it comes to the application of the death penalty. Corey took it as far as it could go. And she was repudiated in a closed primary by a GOP electorate. Look for the police union to reboot its talking points between now and January.

JaxBiz — The Jacksonville Chamber’s PAC played heavily in state House races and got smoked. While Jason Fischer won HD 16, other candidates (Donnie Horner in HD 11, Terrance Freeman in HD 12, Leslie Jean-Bart in HD 14, and Katherine Van Zant in HD 19) lost. As did Duval County School Board candidate Greg Tison, running to succeed Jason Fischer (an endorsed candidate who did win) but unable to make the runoff. Not a good look for the chamber’s political activism. Worth watching: how Daniel Davis is positioned next year in Tallahassee … And for that matter, as mayoral material in the post-Curry era.

Audrey Gibson and Mia Jones — Both of them came out late in the game against County Referendum 1, saying they didn’t support the regressive tax that is the sales tax. They claimed they were misrepresented as endorsing the plan. And they got rolled. Gibson and Jones backed two candidates for the state House who also got shellacked: Gibson and her protégé, Councilman Garrett Dennis, supported Tracie Davis against Reggie Fullwood in the HD 13 primary that Fullwood won. And Jones? She was in heavy rotation the local urban adult contemporary radio station in ads for her endorsed candidate, Leslie Jean-Bart, who lost the HD 14 primary to the “demon busting” former Jacksonville City Councilwoman, Kim Daniels, who will win the November primary and have eight very quotable years in Tallahassee.

Duval DEC — Along with Gibson and Jones, they invested political capital against CR 1, with a mailer late in the game that probably didn’t do much to mitigate a 30-point loss for the referendum.

Front Line Strategies — a mighty big loss for Hans Tanzler defined the primary season for Doster and his posse. Tanzler had more money than every other serious candidate in the CD 4 race combined, especially when a quarter-million dollars of PAC money was folded in — and the results? Anticlimactic. A lot of red meat spots were served up to burnish Tanzler’s creds as a new-school Ted Yoho, and to make the implausible case that former Jacksonville Sheriff John Rutherford was a “liberal.” They even floated an internal poll at the end that showed a positive trend that didn’t pan out, as Tanzler came in third behind Lake Ray. A spectacular flameout.

The Van Zants — Charlie Van Zant lost his bid for re-election as Clay County Schools superintendent, with allegations of plagiarism and other issues dogging him, and with the teachers’ union supporting his opponent. Katherine Van Zant lost her bid to succeed Charles Van Zant as the GOP representative in House District 19, after reports of issues with a homestead exemption dogged the final days of her campaign. A family that weeks ago was synonymous with power in Clay County now finds itself on the outside looking in. On the positive side, though, they at least have more time for home renovation now.

Janet Adkins — Her run for Nassau County School Superintendent ended with an embarrassing defeat to Kathy Burns by a 2-to-1 margin. And the candidate Adkins backed in the House District 11 race, Sheri Treadwell, fell to Cord Byrd. Adkins, famous last summer for being recorded while talking about how the remapped Congressional District 5 would adversely impact Corrine Brown, is now a footnote.